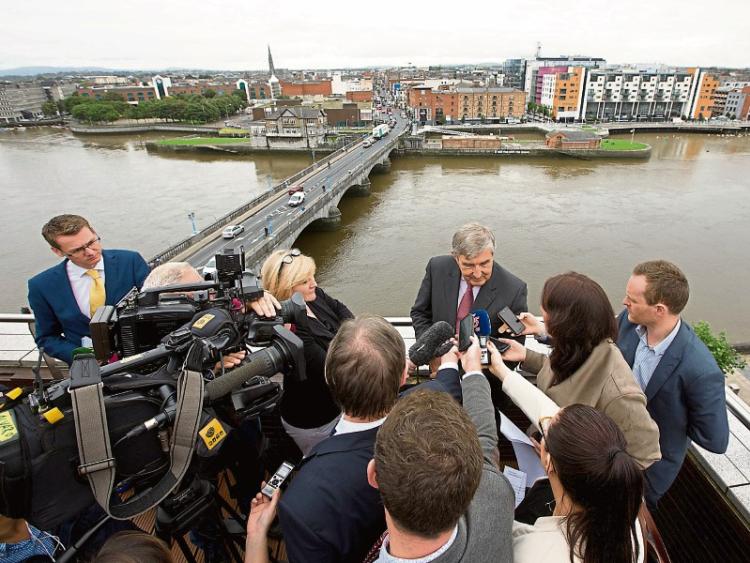 OUR elected representatives in City Hall and in Dublin have decisions to make in 2017. They should be made for a leading Irish city with multiples of its current population, not the status quo. Why?

Limerick is undergoing a renaissance and full credit to our elected officials, the Limerick City and County Council team and all the others all over the city who are spearheading this renaissance.

Even “up” in Dublin, they now discuss our city as a centre for a revitalised Western counterbalance to the capital.

But we in Limerick know we’re at the beginning of the journey to reach our full potential. Whether in 50 years, we will be Ireland’s second city, its third or just be part of a “Bay-Area” type cluster of connected regional Irish cities is not the issue.

What is key is that we build today with the ambition to be the city we can and should be.

To quote Trish Long, VP and general manager Disney Ireland, from the Capital Dublin event, “We must not want to be a poor photocopy of somewhere else.” We have to be an excellent version of ourselves.

Mere population growth is a not a good measure of success. Affordable living, reasonable incomes properly distributed across the population, opportunities for advancement, great education, excellent health care, world-class recreational facilities all need to become part of our success matrix.

We know we still have a lot to do. Many still do not feel the revival has begun. But it has started.

If we make the right choices, everyone will benefit. We will become the new model modern city we want and our children deserve.

Some will say that we have been here before.

This time it is different, for many reasons, not least the following.

Firstly, people’s relationship with urbanism is changing with a rejection of car-dependency among young and old generations. No surprise as cars cost too much money and sit idle 94% of their time. Limerick can respond in ways few “old” cities can do.

Secondly, with Ireland’s population approaching 6.5 million by 2050, Dublin can no longer absorb such growth. Regional cities have to play a greater role and Government is finally making increasing noises of understanding this.

Thirdly, with the merger of our councils, decisions are made for the greater good.

And, finally, this time, Limerick is coming from a position of strength not weakness, with more diversified industries, a more diverse population, ever greater numbers of third level students but most importantly an increasing self-confidence about who we are and what we are capable of doing.

It may take time to get to such a level, but we can and must bravely advance plan now for 300,000 or more inhabitants rather than play the usual game of catch-up we see so often in Ireland.

We can avoid the problems other cities have had with success and growth.

Making decisions now for scale changes the way we look at decisions and the compromises to be made.

Rather than battling for example with increasing annual traffic patterns, can we be the first Irish city to deliver affordable and highly desirable walkable housing with excellent public transport and reject the car-dependent suburban growth model that has begun to choke up many of our other cities.

That will plant the seed of success for many generations to come, allow for affordable expansion and build on our geographical strengths by delivering a highly desirable alternative Irish city.

We know how in medieval times, the decision to build King John’s castle and the walled city gave Limerick City a major role.

We know how again in the 19th century, plans were being put into place at scale to allow Limerick to once more play a major role until disrupted by the famine.

Recently, I came across a Georgian map of Limerick from 1837. It was news to me, their plans included a weir to control flooding and an embankment and an esplanade so that people would have a long riverside walk for pleasure.

That was forward thinking.

Now, it falls to our generation to plan our city and its environs for the future.

We all know though that despite their key role it is not just about foreign direct investment or about shiny new office buildings.

What appeals to those looking at our city and deciding to come to live or set up business here is a strong local community that is also well integrated into a global community. In today’s buzz-words, we are a truly “glocal” location. We cannot lose that as we grow.

The risk during 2017 is that we have decisions to make before a larger more holistic plan can be developed for Limerick 2030 and before at a national level we have a national planning framework.

We must try to imagine the future as we consider our choices.

Urban planning now rejects the model of a concentrated central business downtown with jobs, culture and shopping but empty at night as people live in car-dependent suburbs.

We are lucky. The weakness of our centre allows us to reimagine our city along new modern principles.

Our unfilled canvas, presents a really exciting backdrop if we play to its strengths.

Instead of all being focused on a central core, might we start building for a light rail or rapid bus transit system which connects equally balanced higher density neighbourhoods all over the city, many of whom are already well advanced.

Imagine each of these multipurpose neighbourhoods built at a higher concentrated walkable density around those stops with their own housing, education, shopping, jobs and entertainment.

In between these clusters would be parks and spaces dedicated to sport and relaxation and stretching all the way into the centre and out into our rural hinterland.

The multiple choice of desirable neighbourhoods in our new city prevents housing as we grow becoming unaffordable in the “primary” one. People do not get forced out into unattractive commuter living.

As we grow more, our villages can be similarly developed but so as to retain some of their “village” character.

You can always hop on the train/rapid bus to go to your dream job, university course, a specialty shop, kids playground, museum in another area but it’ll be a choice as you’ll have local choices too.

The high quality density concentrated around transit stops, makes investment feasible and trips shorter as the bus no longer winds between stops with few riders. No one wants to drive daily but short term car rentals (probably driverless) are freely available. You can still drive to a friend living elsewhere or Kilkee or Ballybunion but you’ll want to catch a train to Dublin!

Deciding on those hub areas today and taking stock of what they are missing as we allocate resources could make this a reality to be built over time.

We should make sure that we advance plan for a web of public transport interconnectivity, not routes all converging on a centre.

Against this backdrop, how should we reimagine revitalising our city centre?

Instead of worrying that it does not operate like Galway, Manchester or Cork city centre, we could instead look to develop King’s Island and the Georgian Quarter around their rich heritage as further such residential neighbourhoods housing thousands of new people, in a medieval quarter and a Georgian quarter.

Between the two an accessible walkable retail, employment and entertainment quarter but not necessarily one where all of the city’s services or jobs need to be crammed. One to which people flock to come and wander among speciality shops or just to enjoy the river and the history all around. A weekly riverfest!

Boston’s historic quarter, Brooklyn’s brownstones, the streets of York in England or the bustling historic streets of continental cities are all very desirable areas in which to live as people reject the idea of long commutes.

Get our choices right beginning in 2017 and we can add Limerick’s two historic areas to this world famous list.