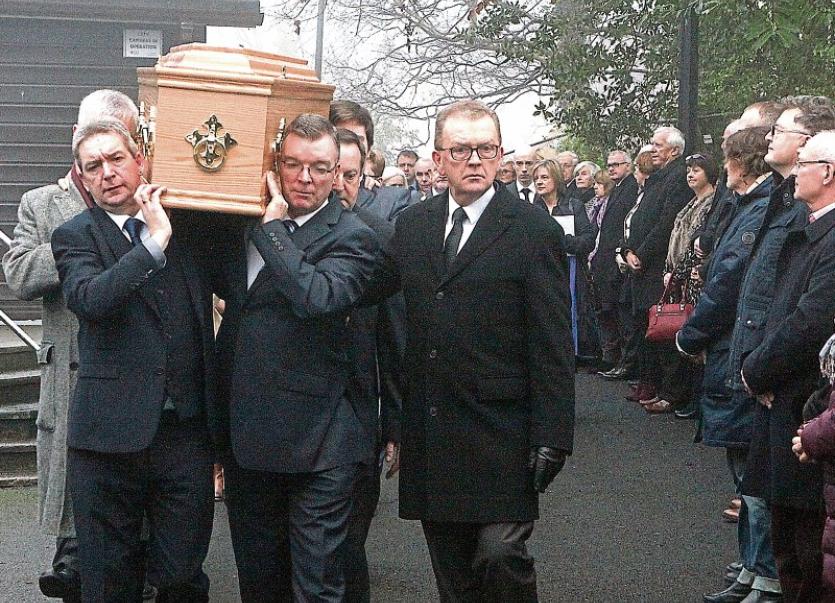 FORMER Mayor of Limerick Tony Bromell's time as first citizen of his native city was his 'greatest honour', his funeral has heard.

Mr Bromell, a former mayor, councillor, Senator and registrar at Mary Immaculate College, died at the age of 84 last week.

A large number of former colleagues and friends turned out for his funeral Mass at Our Lady of the Rosary Church on Saturday morning, including President Michael D Higgins' representative, Captain Eoin Rochford and MIC faculty members, who formed a guard of honour.

Mr Bromell's daughter Una said he was a "proud Limerick man" who had dearly loved his 30 years as Registrar at MIC, plus his stint as Mayor in 1982-83.

"He loved being around the students in Mary I. He believed that their company kept him young.

"Dad was a Limerick man first and foremost, and his greatest honour was to be Mayor of the city in 82-83.

“He followed the Limerick hurling team through everything, without fail," she added.

Mr Bromell's family were very involved in his requiem mass, with the 84-year-old's brother in law Fr. Antoin O'Tuathaigh assisting celebrant Fr Des McAuliffe, while his children Fionnula and Declan gave readings and son Eamon performed several pieces of music, with his grandchildren saying prayers of the faithful.

On Friday, Mayor of Limerick City and County, Cllr Kieran O’Hanlon called a special meeting of the full council at County Hall to “pay tribute to Tony’s service to public life”.

Mr Bromell was commended for his integral involvement in the establishment of the University of Limerick and was the last surviving member of the executive committee formed to lobby for the institution. He received a Limerick Person of the Month award in 2012 for the group’s endeavour.

“Thankfully, because of his efforts, we have one of the greatest third level institutions in Ireland. Tony was very much a family man, and his family represented everything Irish, and the most important thing to him was family,” Mayor O’Hanlon said.

Metropolitan mayor, Cllr Michael Hourigan said that the former senator “set the standards that we, in public life, aspire to. He took great pride in his city.”

Fine Gael councillor Bill O’Donnell said that he was particularly known for his speeches after Mass “back in his East Limerick days”.

He told the council that Mr Bromell would offer his analysis on the progress of elections. "He was a great friend like that," he said.

Council deputy chief executive, Dr Pat Daly said that he was “a very distinguished professional” who was “very active” at a local level.

Sinn Féin councillor John Costelloe said: "I was lucky enough to Tony - he was a great Limerick man, but he was also a great Thomondgate man." His party colleague, Cllr Malachy McCreesh said that, though he did not know him personally, "based on the comments, he obviously had a big impact on the people of Limerick city".

Cllr Stephen Keary said that he "was always a great gentleman".