'Shocking' number of children without a home in Limerick 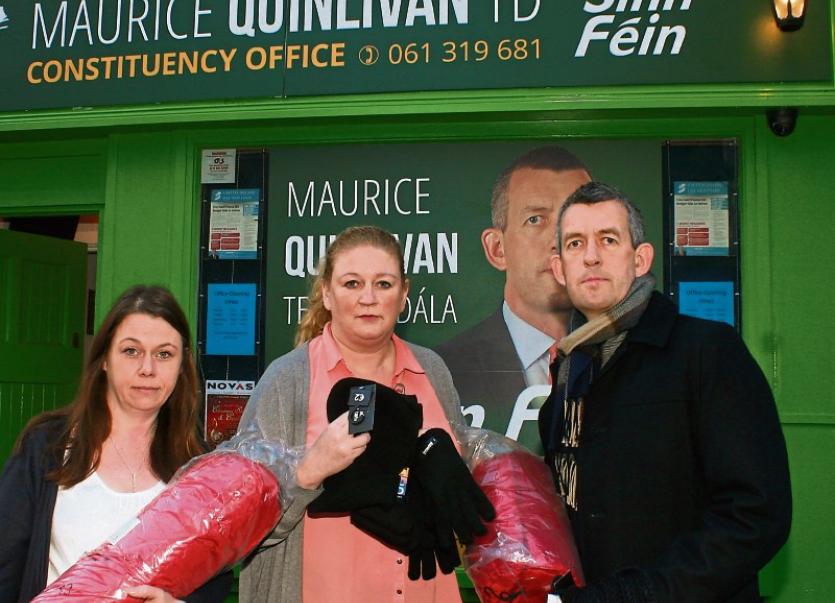 Maurice Quinlivan collecting donations for the homeless prior to Christmas

SINN Féin TD Maurice Quinlivan has described the rising level of homelessness in Limerick as “appalling and simply not acceptable”.

Recent Department of Housing figures show that there are 219 adults and 70 children without a home, with the “vast bulk” of homeless in the Mid-West situated in the city.

In the Mid-West region as a whole, there are 33 families, including 79 children, that are homeless.

Commenting on the homelessness figures, Deputy Quinlivan said: “Whilst these figures are both shocking and appalling the figures don’t include adults and children in emergency domestic violence refuges funded by Tusla, non-residents in emergency accommodation funded by the New Communities Unit of the Department of Social Protection or those people ‘sofa surfing’.

“The figures also don’t detail the length of time people are spending in emergency accommodation with some families in Limerick now spending months in inappropriate hotels or bed and breakfasts,” he said.

He said that the figures show a “failure” in the Government’s housing policies.

“It demonstrates that they are not willing to address the crisis. Despite the spin from Government the numbers desperately seeking housing keep rising.

“There is an urgent need for the Government to step up its house acquisition and building programme to get these adults and children out of emergency accommodation. AIB and PTSB have offered the State up to 1000 vacant houses for purchase yet inexplicably Government has only provided money for the purchase of 200.

“Likewise there are 189,000 vacant units across the state yet the funding being made available to get these units back into active use is a drop in the ocean.”

He said Government can end homelessness in 2017 “if it wants to”.

“However the crisis will only be addressed if they match their words with action and crucially with funds. These rising figures are a stark reminder that government actions to date are still not working and the crisis will deepen.”

On December 19, Novas Iniatitives and Limerick City and County Council’s homeless action team opened a 15-bed overnight shelter for 15 adults, which will operate until March.