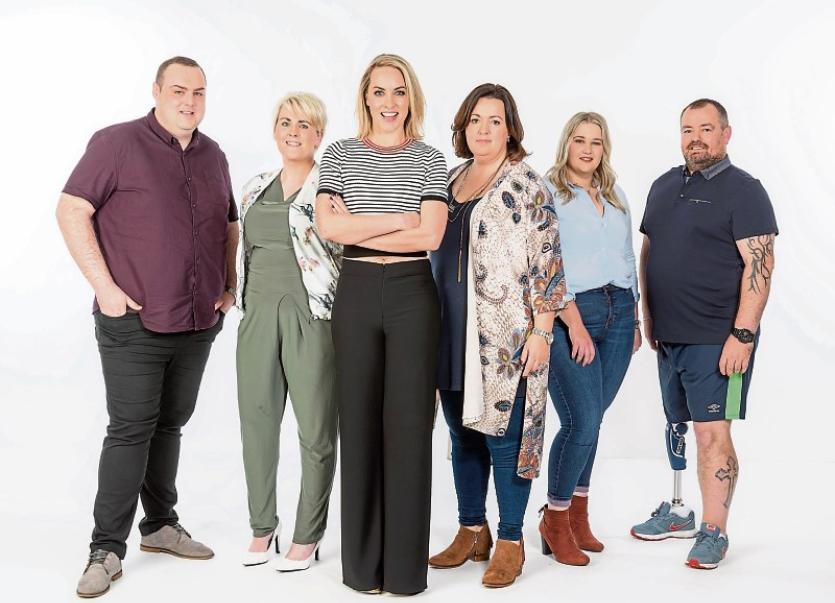 Ready to lead the nation on Operation Transformation: Marie Grace, second from left, from Pallasgreen with the four other leaders and Kathryn Thomas

THE MOMENT Marie Grace decided to apply for Operation Transformation  was when she was trying on a dress for daughter Daisy’s christening.

The 32-year-old who lives in Pallasgreen had bought the outfit when the baby was four weeks old – eight months earlier.

“I went and bought a dress that I really liked. It fit me and that was perfect. The week before her Christening I tried on the dress and it wouldn’t fit me. I decided at that stage I had to so something about it. That was the clincher,” said Marie.

She was picked out of hundreds to be a leader on the prime time RTE series promoting exercise and healthy eating that begins this Wednesday and Thursday night, January 4 and 5 at 8.30pm.

Married to Fergal, the couple have two daughters Lily Mai and Daisy. With her second child, Marie’s waters broke early and she was rushed to hospital where she gave birth to a little girl called Michaela, who sadly passed away a few days later. In 2015, Marie became pregnant again and they welcomed youngest daughter Daisy to the world.

“I knew the last two years I had really let myself go. I would have been fairly fit before that. I would have been into my exercise but I lost a little girl two years ago and I think since then I didn’t do anything,” said Marie. The part-time hairdresser currently weighs 14 stone 2 pounds and is 5 foot 5 inches tall.

“I never would have been eight or nine stone. I normally would be around the 11 stone mark and that was fine. I didn’t really have weight as such but now I’m 14 stone 2 lbs. My ideal weight would be 11 stone,” said Marie, who didn’t think she had any chance of making the show.

“Then they rang from RTE to say they would come down to meet us. My sister Michelle said, ‘Oh my God you could be in with a chance Marie’ and I said, ‘I don’t think so, surely there are other people more worthy of it than me’,” recalled Marie. Then she was invited to the final group of 18 get together in Santry.

“I came home and said there are definitely more people that deserve it than I would. I really didn’t think I would get on,” she said. A few weeks later Kathryn Thomas arrived on the door stop of N&R Hair Studio to give Marie the good news.

Asked what kind of leader she hopes to be, Marie says simply, “To help other people who might be in the same situation as I am.  People that have small children and everything they do is for the children. I am doing this for myself and my children, that obviously I will be healthier and fitter. That’s what I am hoping for at the end of the show.

“I don’t think I will lose three stone in seven or eight weeks but I’ll be on the road to losing it. This will be the start and I will be keeping it up afterwards,” said Marie.

More good news is that baby Daisy’s severe acid reflux which caused her a lot of discomfort and left her crying throughout the night has eased. Marie and Fergal have been able to get a full night’s sleep for the first time in months and she will need all her energy for the weeks ahead.