Tragic deaths of three children in Limerick over festive period

Five-month-old girl dies in cot; Girl, 10, dies on board flight; Teen passes away after illness 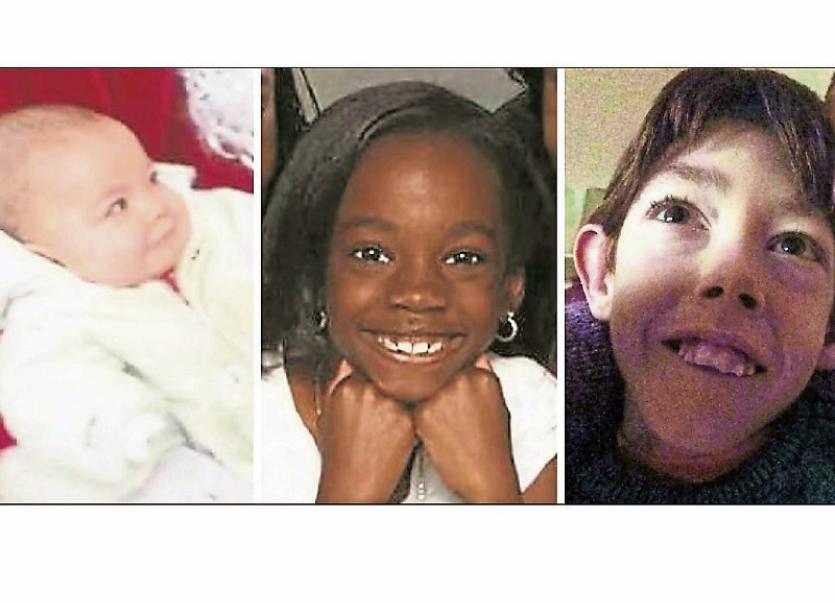 TRAGEDY struck three families in the Limerick area over the Christmas period when a baby, a child and a teenager lost their lives in separate tragic incidences.

Five-month-old Margaret Alexandra Burke passed away unexpectedly but peacefully in her cot at her home in Effin on Christmas Eve - almost a year after her first cousin, also named Alexandra Burke, and also from Effin, died from a rare form of cancer aged just five.

Fifteen-year-old Sean Holland, from Herbertstown, sadly passed away after bravely battling a long illness, while 10-year-old Canadian girl of Nigerian extraction, Madra, died on board a flight which was diverted to Shannon Airport.

“She was smiling mad the night she died,” Walter told the Limerick Leader.

“They had fed her at two o’clock that morning. We are devastated. That was our Christmas,” he added.

Hundreds of people gathered at St Peter and St Paul’s Church in Kilmallock this Tuesday for the funeral Mass of the little girl.

At the top of the aisle, a single red rose rested on a three-foot white coffin.

A foil pink helium balloon with the word Baby swayed gently from side to side.

Sitting in the front pew, in the shadow of the Christmas crib, baby Margaret Alexandra’s heartbroken mother Margaret was comforted tenderly by her husband Walter. Margaret always sang Daddy’s Girl to her baby girl. That was her song. A friend brought Margaret a glass of water from the sacristy, everyone wanted to in some way ease her pain.

The song, Suffer Little Children to Come Unto Me, signalled the start of the Mass.

“No mother expects to live through the death of her child. I am sorry that death has come so suddenly. I am sorry that your heart is pierced with pain. I am sorry that life can be so hard,” said Fr David Casey, CC, Kilmallock. Baby Margaret Alexandra leaves behind three brothers, John-Ross, William and Michael and her sister Maureen.

The local undertaker had been putting the finishing touches to the headstone of her first cousin Alexandra Burke, who passed away last January, when word filtered through of the second tragedy in the family.

“They had done the lovely white stones and blue stones, that Alexandra loved, when they found out about the other baby. The two little girls are buried close to one another in Effin Cemetery,” Walter explained.

“The little baby is buried with my father and mother, Michael and Margaret, and Alexandra, my other granddaughter who died at the start of the year, is buried with my ancestors, a small bit away,” Walter added.

Earlier in the week, the Holland family from Herbertstown were plunged into mourning with the loss of 15-year-old Seán.

On December 19, Seán passed away peacefully in the wonderful care of the Children’s Ark in University Hospital Limerick.

The remarkable teenager was given just two years to live when he was diagnosed with Lissencephaly - a rare brain formation disorder - when he was a baby. Yet the beloved son of John and Pearl and brother of Niamh, from Herbertstown, lived for 13 more years than expected.

“It was their love for him that kept him alive,” said Fr Roy Donovan, who celebrated the Requiem Mass in Caherline church.

“It was sheer love. They said he was the most kissed child in the whole world because he was so loveable. His smile was so disarming,” said Fr Donovan.

The parish priest described the Mass as “very emotional” but also a celebration of the young man’s life. Those in attendance will not forget his father, John’s moving words.

“Seán had been such a part of his parents’ and older sister’s lives. The four of them were intricately linked together through him. There was a massive bond,” said Fr Donovan.

“The school did a show panel on him with photographs and quite a number of messages from teachers, care assistants and his friends in St Gabriel’s. They all had wonderful messages. A lot of them said he had such a wonderful smile,” said Fr Donovan.

Meanwhile, the family of the 10-year-old girl, who died on a flight that was diverted to Shannon Airport on Christmas Eve, have set up a fundraising page to raise funds to bring her body back to Canada.

The young girl, who lived in Toronto, fell ill while travelling with her three sisters on board an Air Canada flight from Toronto to Heathrow, on Christmas Eve. The girl, Madra, was later pronounced dead at the scene after being examined by a local doctor.

Madra, who had sickle cell anaemia, suddenly fell ill and was found “unresponsive” by crew members.

Madra was traveling to Nigeria to spend the Christmas holidays with extended family. Their mother was in Nigeria at the time of the incident.

“We have been in Ireland since then, waiting to take our dear sister back to Canada. The Irish police and medical teams and Air Canada have been very helpful in this situation. Our family is a single parent family of four children, so we do not have the funds to have a proper burial for our beloved Madra.

“Any help you can give will be deeply appreciated by our family during this time of devastation and grief. Our lovely Madra suffered with sickle cell anaemia and any additional funds will be donated to the clinic she attended, who were so good to her always. Madra was the light of our lives, she brought joy and happiness to our household and we will never be the same without her, however we will keep her memory alive. Thank you.”

The family of the doctor, who was at the scene of the incident at Shannon Airport, invited the three sisters to stay at their home over the Christmas holidays,

On Tuesday the tragic girl reposed at the doctor’s home, which is in the Clare region.

Tony McMahon, of McMahon’s Funeral Home, commended the doctor and his family, and two members of An Garda Síochána in Shannon, who escorted the family to Dublin as the girl’s body was being examined.