CAMPAIGN WAS SET UP ON WEDNESDAY 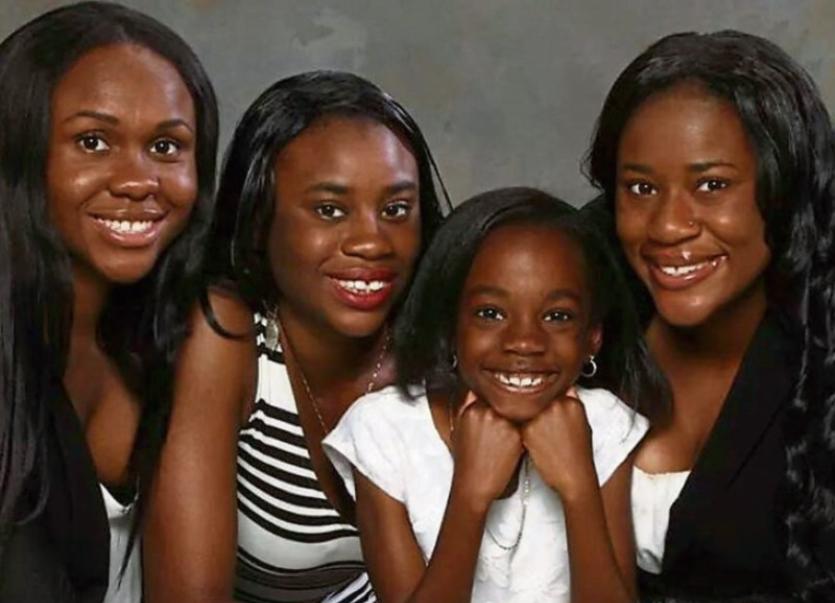 Madra, second to right, with her sisters

MORE THAN €15,000 has been raised for the family of the tragic 10-year-old girl who died on a flight that had to be diverted to Shannon Airport on Christmas Eve.

The young girl, who lived in Toronto, fell ill while travelling with her three sisters on board an Air Canada flight from Toronto to Heathrow, on Christmas Eve. The girl, Madra, was later pronounced dead at the scene after being examined by a local doctor.

On Wednesday, one of Madra’s sisters set up a fundraiser page, in order to raise Can$15,000 (€10,579) to fund the repatriation and burial of the body.

One individual donated $500 and commented: “There are no words.”

In their appeal to the public, the sister wrote: “On Christmas Eve my three sisters and I left Toronto to spend Christmas with our extended family in Nigeria. Our mom flew ahead of us. Our beautiful youngest sister Madra (10) was with us.

“She took ill on the plane and despite the efforts of some kind medics on board they could not save her. We have been in Ireland since then, waiting to take our dear sister back to Canada.  The Irish police and medical teams and Air Canada have been very helpful in this situation.

“Our family is a single parent family of 4 children so we do not have the funds to have a proper burial for our beloved Madra. Any help you can give will be deeply appreciated by our family during this time of devastation and grief. Madra was the light of our lives, she brought joy and happiness to our household and we will never be the same without her, however we will keep her memory alive. Thank you.”

On Christmas Eve, the sisters stayed in a Limerick city hotel. The family of the doctor, who attended the incident at Shannon Airport, invited the three sisters to stay at their home over the Christmas holidays.

After the body was accepted by McMahon’s Funeral Home on Tuesday evening, the body reposed at the doctor’s family home in the Clare region.

Tony McMahon, of McMahon’s Funeral Home, commended the doctor and his family, and two members of An Garda Síochána in Shannon, who escorted the family to Dublin as the girl’s body was being examined.