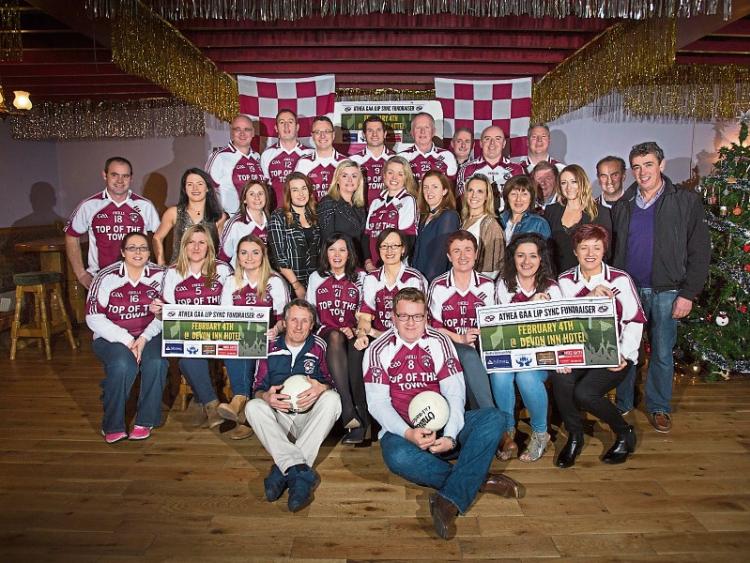 The group of performers who will partake in the Athea GAA Lip Sync Battles at The Devon Inn Hotel on February 4 at 8pm.

THE online and TV sensation that is the Lip Sync Battle is coming to Athea.

And in preparation for the upcoming battle, lip sync fever is gripping households right across the parish, drawing in choir singers, shower-only singers and alone-in-the-tractor singers of all ages and ability but particularly those of no singing ability whatsoever.

“We have lots of would-be Beyonces, Ronan Keatings and Daniel O’Donnells in the making,” says Damien Aherne, PRO for the event which is being organised by Athea GAA Club. And he is confident whoever wins the Lip Sync Battle, which takes place in the new year, he or she will be able to “pretend sing” with the very best of the professionals.

A trick known to many in the professional music business, lip syncing went viral last year and even spawned its own reality TV programme.

“It involves acting out and singing along to a popular song on stage,” Damien puts it succinctly.

But its first official appearance in Athea is already generating huge excitement ahead of the Lip Sync Battle proper which will take place in the Devon Inn Hotel on February 4.

“We have established a team of 50 plus brave volunteers from the parish,” Damien explains but adds that many volunteers from surrounding parishes have requested to be part of the fun.  The acts are following a rigorous training schedule with trainer Cassie Leen who says: “I’ve said it since day one, it will be the best show I’ve been involved in, they are so good and so enthusiastic and excited about it all.’

There will be 12 acts in total performing on February 4 and from these acts, one act will be crowned the Lip Sync Champion.

“It is the first time in this area for this particular kind of fundraiser,” Damien explains. Four main sponsors have been secured and a programme for the event is also intended to raise sponsorship along with the ticket paying public.

The money will go towards funding the  improvement to the GAA club’s  facilities as part of their ambitious 2020 programme, Damien explained.

The clubhouse and gym facilities have already been upgraded and work began last year on the first phase of improving the pitch, with new drainage, a sand carpet and new grass .  The work to date has cost €135,000 which has been part-paid through local fundraising and grant aid. The hope is that the Lip Sync Battle will sort out the bills still left to pay as well as generating a lot of fun.