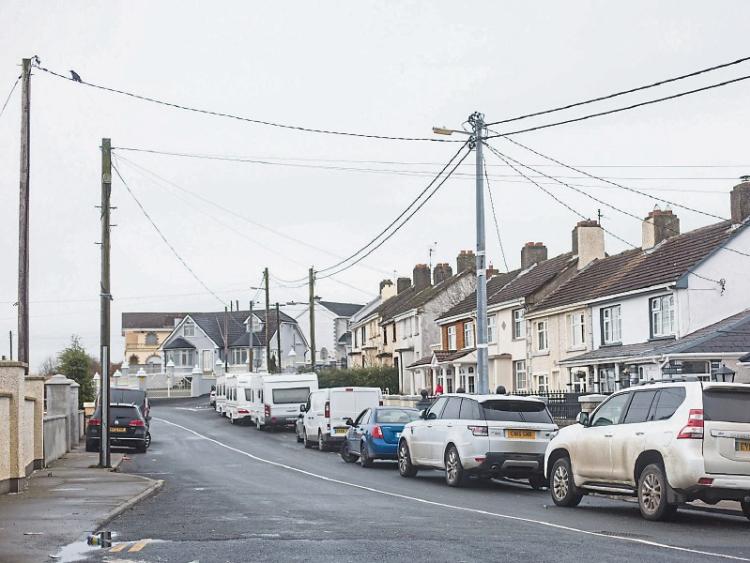 Some of the caravans and cars in Rathkeale this Wednesday

LIMERICK City and County Council has been accused of having ‘blinkers on’ with regard to the risks which have been created by the influx of Travellers to Rathkeale for Christmas.

Cllr Stephen Keary is calling for immediate action as he believes the situation on the ground is a disaster waiting to happen.

The population of the town has more than doubled in recent weeks as hundreds of people have returned ‘home’ for the Christmas period.

“There are serious issues with illegal parking in the town, gas bottles and (electrical) cables and generators leading to caravans,” he said during a meeting of the Home and Social Development SPC at County Hall on Monday.

After being informed by a council official that the concerns raised were an “enforcement issue” Cllr Keary accused the local authority of “totally ignoring the potential catastrophe”.

Insp Cullen told councillors at a special meeting of the Adare/Rathkeale municipal district there would be a particular focus on public order offences and illegal parking.

“The plan for this year and Christmas moving forward is that we’re going to drop in additional resources from outside for appropriate policing in Rathkeale,” he said.

Speaking this week, Cllr Keary said he does not want a repeat of the tragedy at a halting site in Carrickmines last year in which ten people died.

“The answer I have been given (by the council) is that it’s a private site, Limerick County Council or any other local authority doesn’t have any jurisdiction over it but they do – you are only allowed to park one caravan in any site and occupy it with permission,” he told the Limerick Leader.

“All anyone has to do is drive through Rathkeale any morning and they will see there are caravans literally parked on top of each other with with no public amenities, no sanitary facilities and no proper mains supply of electricity so it is an extremely hazardous situation and it is a disaster waiting to happen,” he added.

The Fine Gael councillor says while it may be too late to take action this year, efforts should be made to ensure there is no repeat in 2017.

“To some degree it’s an annual event over two months which leads to overcrowding, we do not want a repeat of anything like the events that took place in Carrickmines last year.

“It would appear it is too late to put the necessary curtailment on the parking of caravans this year.

“The owners of the sites need to be summonsed and brought to court. This is what has to be done,” he said.