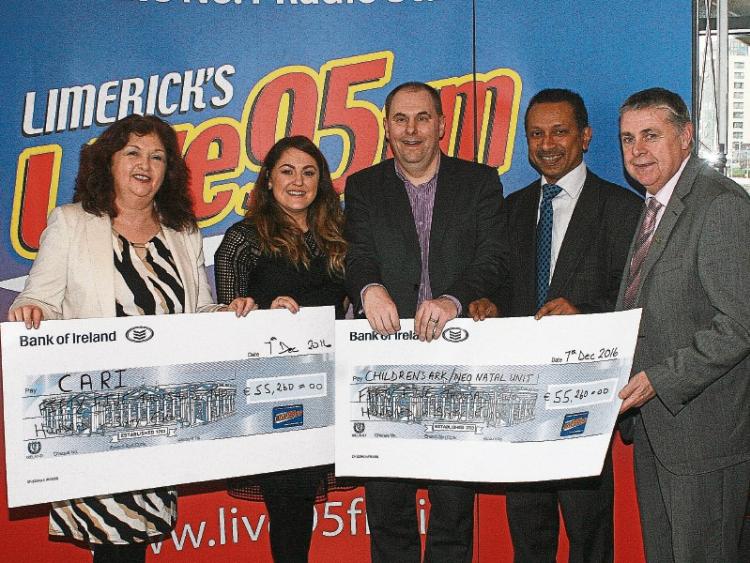 TWO children’s charities in Limerick are celebrating after they were each presented with cheques for more than €55,000.

The monies, which have donated to CARI and the Children’s Ark at University Hospital, Limerick (UHL) were raised during Live 95FM’s 95-stop-tour which took place in September.

€9,000 of the total was donated from the Mid West Press Ball.

The radio station’s flagship Limerick Today programme was broadcast from different towns and villages across Limerick during the week-long initiative and communities across the city and county held a variety of local fundraising events including coffee mornings, bingo nights, skipathons, fun cycles, walks, raffles, fashion shows, cake sales and even a skydive.

Dozens of schools across the city and county also supported the campaign by taking part in Welly Wednesday which saw pupils fill wellington boots with loose change.

“I am totally ecstatic, I can’t believe it. It’s very emotional shedding tears of happiness, gratitude and appreciation for everybody who has helped us”, said Mary Madden, community employment supervisor with CARI Limerick.

“Thank you so much to everyone in Limerick who helped raise money, for this great cause. It is our responsibility that it reaches the right target - our sick children and babies in the Ark and Neonatal Unit,” he said.