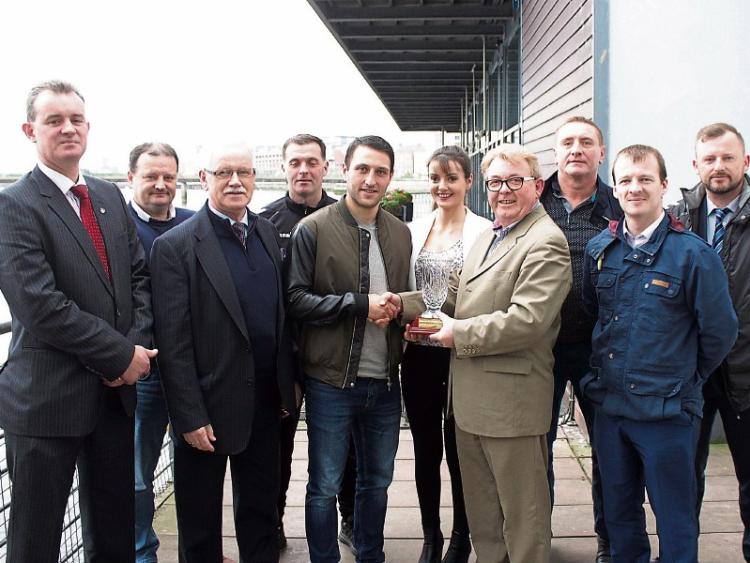 THE Limerick FC team who earned automatic promotion back to the Premier Division of the SSE Airtricity League for next year after an awesome season, have been honoured with the Limerick Person of the Month award.

The award was accepted by team captain Shane Duggan who led the Blues when they ran out convincing 23 point winners of the First Division.

“It’s fantastic - it’s good to get this recognition especially after the season we had and all the work that’s going on behind the scenes in the club,” said Shane at the award presentation at Limerick’s Clayton hotel, formerly the Clarion Hotel.

“The club is only going one way and that’s up and everything is in place to have a really strong team and club,” Shane added.

The Superblues wrapped up promotion back to the SSE Airtricity Premier Division in August, by beating UCD at the UCD bowl.

There were scenes of pandemonium at the final whistle as fans and players mixed to celebrate the Shannnonsiders second First Division title in four years.

“The supporters pay good money to come in and watch us and it’s up to us to perform and to entertain them and try to win trophies and that’s what we will be trying to do on the pitch - to give back to the supporters who come out and watch us and especially for people behind the scenes in the club - the likes of Pat O’Sullivan who has put a lot of money into the club and you want them to get the rewards as well,” said Shane.

Limerick native Shane who hails from Norwood Park said it’s “brilliant” to put on the Limerick jersey “especially when you have all your friends and family going to the games”.

“It’s a great honour to be able to play for your hometown club, especially being captain as well.”

The 27-year-old said that his side have nothing to fear in the Premier Division.

Limerick FC chairman Pat O’Sullivan credited the “tremendous support” for the team with helping them bounce back after they were relegated last year.

“Having recognised the tremendous support there is for the club across the whole county, we wanted to ensure that we came back up as quickly as possible so we made a conscious decision that there is a market for the product in Limerick and of course a huge asset is the community work we do, the support we get from the communities and obviously then going back to Markets Field.

“We have made that a place which is a face of Limerick for a lot of people to visit.  We could see that there was a really good, positive reaction to the success of the club and we felt we needed to back that up by putting the best team on the pitch and then, therefore, have the best chance of getting back into the Premiership.”

Mr O’Sullivan paid tribute to everyone who has backed the club and brought them to where they are today.

“Therefore it’s a great tribute to all the volunteers who are invaluable, to the staff, players, management, sponsors and everybody who has supported us. The club really has had a terrific year and a nice bonus at the end of the year was that Markets Field was also chosen as best soccer pitch in the country.

“Everybody is looking to build on that for next year. We will be broadening our community work. We hope to have some movement on the development in Bruff.

“We would like to thank everyone associated with the Limerick Person of the Month award - we really appreciate it and it is a further acknowledgment that the club is going in the right direction and it is trying to do the right thing despite the economic difficulties that are out there.

“I would like to acknowledge our sponsors and we have an advisory group which is a huge help to us and I would like to think that will become more pronounced and effective.”