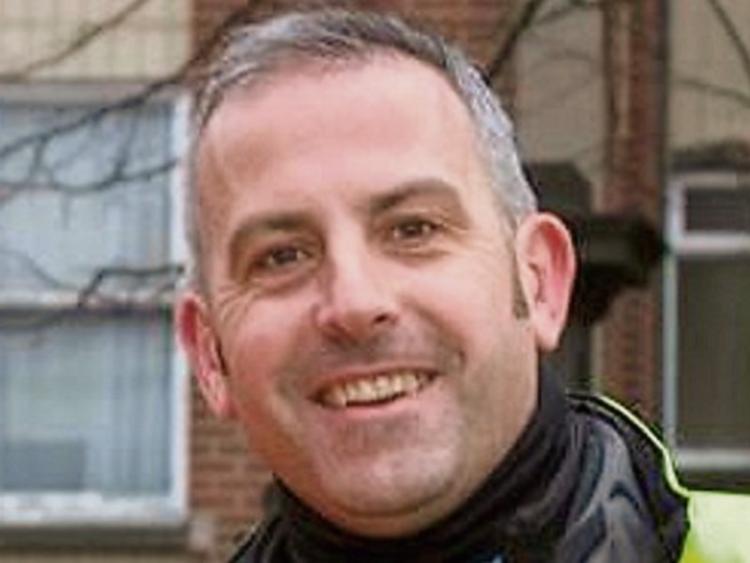 Aidan Lynam, who died in a road traffic collision in county Clare

AN INQUEST has heard emotional testimony from friends and fellow bikers of the late Aidan Lynam, who died in a road traffic collision in county Clare while he was undertaking a charity motorcycle in aid of Down Syndrome Ireland.

The fundraising event, Rev-up4DSI, had been his brain-child and was in its tenth year, raising over €1.6m in that time. He had worked for the charity in its head office in Dublin and had helped operate its help line service.

He became involved with the charity after the birth of his daughter Robyn in 2005, who has Down Syndrome.

Limerick Coroner's Court heard this Monday morning that Aidan, 44, a father of three from Woodview, Lucan, county Dublin, was overtaking two vehicles when his motorbike collided with a Volkwagen Polo five-door hatchback on the Kilkee to Kilrush N67 road, as the car approached the junction from a local road.

After nearly three hours of evidence from gardai and civilian witnesses, the jury recorded a verdict of accidental death in accordance with the medical evidence, as a result of the road traffic accident on Sunday, May 3, 2015.

The speed limit in the area was 50km, and the "weather was dry and clear, with good visibility", gardai outlined.

The court heard that the deceased was the lead motorcyclist in the group, and had given a safety demonstration that morning prior to their departure.

The group stopped in the Burren and other scenic locations in Clare to take pictures before the collision occurred.

There were 150 motorcyclists participating in that Bank Holiday weekend event, which was subsequently cancelled after the crash. The motorcyclists escorted his hearse back to Dublin that weekend.

He was airlifted from Clare to the University Hospital Limerick by the coastguard helicopter.

The coroner, Dr Timothy Casey, extended his sympathies to the deceased's family, as well as the driver of the other vehicle, whom he said "has also suffered trauma and has to live with this."

The driver of that vehicle, a 21 year-old woman, said that she left her house on her own at around 10.30am and travelled to her boyfriend's mother's house, as they decided to go for breakfast in Kilkee.

"I looked right and saw cars coming as I approached the junction. I had to pull out a bit more to go left," she said in her testimony, which was read to the court.

A local resident later called her over to her house, asked her to sit down and gave her a cup of tea. Shortly later gardai asked her to do a breathalyser test at 12.25pm, to determine any alcohol in her system, which she passed.

She had been driving for two years at that time, and travelled that stretch of road five days out of seven, she said in her statement.

She sustained injuries to her right shoulder, including "scorching" from the seatbelt, and travelled to hospital in an ambulance with her mother, who was called to the scene.

Sergeant Seamus O'Regan, a forensic collision investigator in the Western region and based in Oranmore, county Galway, outlined to the court that when he arrived at the scene at 2pm, the two airbags in the Polo had been deployed, and the gear-stick was in first gear.

The vehicle was found to be in good condition, and Mr Lynam's BMW motorbike was in "very good pre-collision condition", with 3,322km on the clock. It was in third gear at the time of the inspection.

Witness Matthew Lennon said that he had his 13 year-old son Jack with him that day, and recalled Aidan's bike being some 10 meters in front of his own.

He couldn't recall their exact speed, but estimated it was in the region of 60-70km/hr.

Another witness Mary Roche, from Lisheen, Kilkee, said that she was driving out of Kilkee and heard the motorbikes approaching, and she adjusted her speed to allow them to pass

"The next thing I saw was the impact between the bike and car," she said.

Ms Roche said she spoke to the driver of the vehicle, "who was in shock and asked me if it was her fault."

Witness Emma Philips said that she and two others were on their way to get the ferry from Killimer, having stayed in Lahinch the night before.

She saw the bikers approaching in her wing mirror. She said there was "excellent visibility and it was the perfect day to be on a bike."

Also a biker, Ms Philips had undertaken training in the safe removal of motorbike helmets during collisions, and approached the scene.

She said he was breathing, but it was laboured. A friend of hers began chest compressions until the paramedics arrived.

Ann Ryan, from Dungarvan in Waterford, said she was a pillion passenger on her husband's motorbike.

As they approached the scene of the accident, she "thought someone had skidded and come off their bike. But I knew when I saw one lady's face that it was more serious."

After last year's tragic events, the cycle continued this year in Aidan's memory and to raise funds for Down Syndrome Ireland.

The three-day charity run has grown in size each year - this year saw 140 riders and 40 pillions set off from Dublin. The route is never revealed in advance, with route maps given to riders just ahead of each day's three stages.

Aidan's wife Nicky and children Jake (14), Robyn (11) and Harry (8), joined the run once again this year and witnessed the unveiling of a new logo for the event, bearing an image of Aidan on one of his beloved BMW motorbikes.