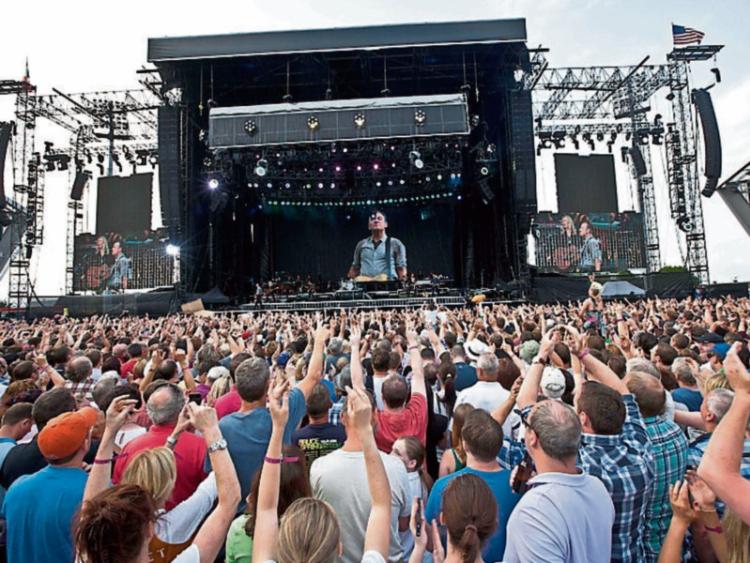 Bruce Springsteen at Thomond: The venue is still hoping to attract more concerts but is losing out to Dublin

OVER 100 residents near Thomond Park have submitted a petition to An Bord Pleanala against the erection of commercial billboards at the famous ground.

The Mayorstone Coolraine Residents’ Association are the sole objectors to the plans by the Thomond Park Stadium Company Limited to install two large LED commercial advertising billboards on the South Terrace Road.

They argue that the home of Munster Rugby is situated in a predominantly residential area, and that the proposed signage will face the exclusively residential Mayorstone estate.

“The most significant personal and professional investment made in a lifetime is the purchase of a home to enjoy and take pride in, and commercial advertising will have a considerable adverse impact on the quality of life of the residents, and the value and desirability of property in the area,” they state in their objection.

They also claim that “after dark it will provide a lit and sheltered area which will attract anti-social behaviour.”

While the billboards are for ‘wet posters’, they will be illuminated at night-time.

Speaking to the Limerick Leader, John Cantwell, stadium director at Thomond Park, said that the billboards are of a “much reduced size” than those previously in place, and form a part of its revenue raising activities, which in turn fund their community programmes.

“We have taken the concerns of the residents into consideration, as we do at all times, and hope we come to a satisfactory conclusion. We have a very healthy relationship with the residents, and we wish to maintain that,” said Mr Cantwell.

“The signage doesn’t bring in a huge amount of revenue, but it helps to fund our community programme – including community sponsorship funding, for youth programmes, senior citizens programmes; it’s all inclusive. We’re not just about staging matches and generating revenue for Munster Rugby – we want to ensure we have a positive impact for the local community.”

“We’re getting ready for some busy games now, which will hopefully benefit all of Limerick – not just Thomond Park. We have to try to generate revenues as well to ensure that the stadium is sustainable. The application is for a minimal amount of signage, and is in line with what other stadia display.”

He said they are endeavouring to secure music concerts for Thomond Park, but many of the big name acts are being directed to Dublin. Pink, Elton John, Rod Stewart, Bob Dylan and Bruce Springsteen have all played in the €40m stadium but there have been no concerts there since 2013.

”We’ll continue our best efforts, because it’s a fine venue for concerts. It won’t be for the lack of trying.”

Asked if Beyonce could yet make an appearance on the city’s northside, he said, with a laugh: “We’d have Beyonce in the morning.”

He said there has been a “upswing in attendances” at matches this year –most recently at the sell-out Munster versus Maori All Blacks match – noting “a success for Thomond Park, is a success for the city as a whole.”

Limerick City and County Council had last month granted the development permission for a period of three years “to further assess the visual, traffic safety and other consequences of the development, in the interest of proper planning and development and in the light of changing circumstances.”

The case is due to be decided upon by An Bord Pleanala, the national planning authority, by April 10 next.