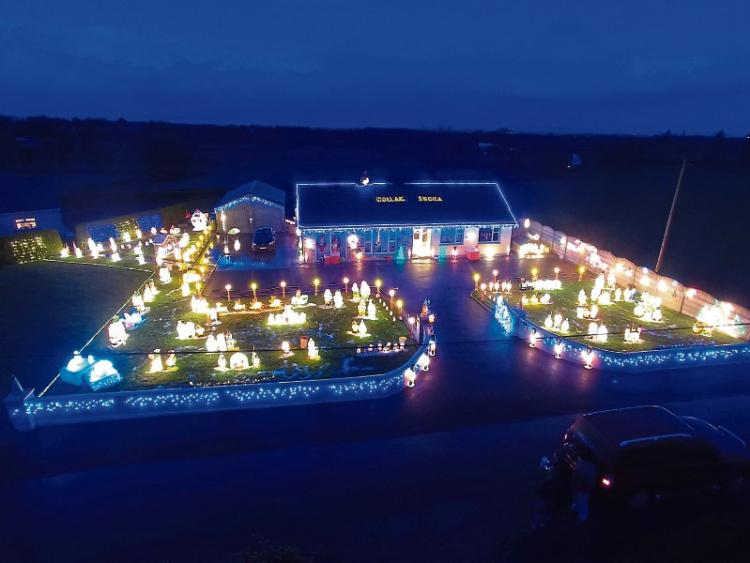 EXCITEMENT is growing at the Lynch household in Castletownconyers, Ballyagran where their extensive Christmas light display will be officially turned on this Saturday evening and where six-year-old Caoimhe has been having her say in how things are done.

“We have been doing lights at the house since 2003, but it was just for the family and not for charity,” Lorraine O’Sullivan Lynch explained to the Limerick Leader this week. But when daughter Caoimhe was born to Lorraine and Kevin in 2010, that changed.

Caoimhe was born prematurely and spent the first nine weeks of her life in the specialist neo-natal unit in Limerick Maternity Hospital, Lorraine continued: “We decided we would raise money for the neo unit after she was born. They use the money for new  equipment.”

Happily, the donations received from their light display has been growing each year and €1,800 was donated to the unit last year alone.

Last year too, the family was thrilled to make it into the top nine of the best lit-up houses on the Late Late Show.

“We have a lot of stuff; “ Lorraine said simply. When their display is up and running, there are over 100 items in total, including Santa Claus, reindeers, penguins, elves, and snowmen and new items are added every year!

This year, Lorraine revealed, Caoimhe, now six, took a  most active part in determining where things were going. “She is beginning to run the show,” she laughed.

The big switch-on takes place at 5.30pm this Saturday evening and will continue each night from 5pm to 10pm until January 6. The Lynch home is located just off the Bruff line, about six kilometres from O’Rourkes Cross on the road to Newcastle West.

Once you are on the Bruff line, you can’t miss it, said Lorraine and all are welcome.