'Groundswell of concern' over Irish Cement's proposals for Limerick

Firm to meet council's economic committee about its proposals for Mungret 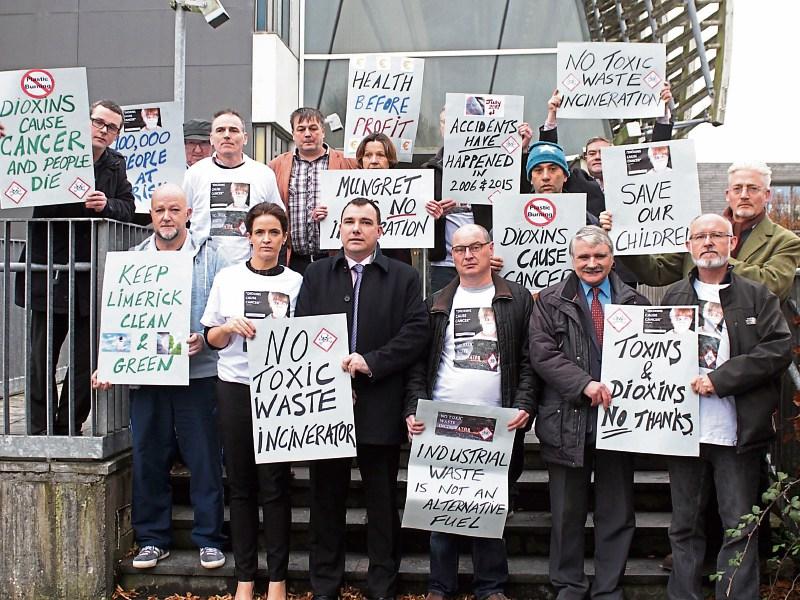 Members of Limerick Against Pollution at County Hall

THERE is a “groundswell of concern” in Limerick over Irish Cement's €10m plans to burn industrial waste at their plant in Mungret.

That was the message Aongus Mitchell, a spokesperson for the Limerick Against Pollution (LAP) group delivered to Limerick City and County Councillors on Monday.

Mr Mitchell who, along with a large group of people protested outside County Hall, was allowed to address the plenary meeting when councillors agreed to adjourn normal business for ten minutes.

Fianna Fail leader Cllr Michael Collins however  said he was not comfortable with this as there was a planning application on the matter, while Cllr Bill O’Donnell FG argued it was a “live application”.

“We are opening an unbelievably dangerous precedent,” his party colleague Cllr John Sheahan argued while Fianna Fail’s Eddie Ryan argued the council should stick to procedures.

All council officials and some councillors left the chamber before Mr Mitchell spoke.

The idea of burning industrial waste as “alternative fuels” was a complete deception, Mr Mitchell said.

Burning rubber, solvents and toxins releases dioxins and furans, he continued and these “are recognised globally as two of the most toxic chemicals in our environment”.

“To have these fumes released into the atmosphere from essentially a processing structure not really equipped to burn that type of waste, is deeply, deeply concerning,”

Mr Mitchell also warned of the possible negative effects on Limerick’s large and expanding cattle and dairy herds and on the powdered milk industry.

“If we start burning industrial waste, there is every chance of it getting into the food chain,” he said.

There are some really ambitious, development plans in the pipeline for Limerick, he added, and he found it “worrying” that all of that should be “potentially threatened” by burning industrial waste,

He reminded councillors that Apple had decided to locate in Co Galway in order to be 200 miles from Sellafield. That was about clean air.

“We should see clean air as a huge, huge asset,” he said and he beseeched councillors to “hang on to it” at all costs.

It was also quite disturbing, he said, to see how little community engagement there had been on the project, with no public consultation and limited public awareness.

“There are a thousand schoolchildren being educated daily in the shadow of that cement works,” he pointed out.

“We have a city that really is on the up. Limerick and the Mid-West is selling itself as an important social hub.

“There is so much going for us. The idea we would risk that reputation just to burn a huge amount of industrial waste seems to me would be madness,” Mr Mitchell told the councillors.

Meanwhile, it has emerged that Irish Cement has accepted an invitation to address the council’s economic committee on its plans.

The company has consistently said  there will be no increase in emissions if its proposals get the go-ahead.

And it has also said the switch is necessary to secure the future of the 80 staff working there  and would create 60 temporary jobs.

“Irish Cement would be more than willing to meet with the committee at council buildings and to explain the proposed development with them there,” a spokesperson for the company said.

But local residents opposed to the  proposal have said they will go to the High Court to stop the company’s plan to burn industrial waste.

Members of Limerick Against Pollution (LAP) descended on County Hall this Monday for the full council meeting to show their opposition to the scheme, with spokesperson Aongus Mitchell saying: “We are going to fight this very hard and long. We are going to make sure our voice is heard.”

They are concerned about the impact on the environment of burning used waste and tyres instead of fossil fuels.

A spokesperson for Irish Cement has confirmed it will accept an invitation from the local authority economic committee to face questions in a public arena from councillors.

“Irish Cement would be more than willing to meet with the committee at council buildings and to explain the proposed development with them there,” the spokesperson confirmed.

Fianna Fail councillor Noel Gleeson, who chairs the committee confirmed he was in receipt of a letter from the company, while his party colleague, Cllr James Collins suggested the firm addresses a joint meeting of the environment and economic groups.

All this comes against the backdrop of LAP holding a public meeting which drew a crowd of around 70 people to St Paul’s National School in Dooradoyle. With the company seeking planning permission and an Environmental Protection Agency (EPA) licence to change processes, Tim Hourigan, who chairs LAP says residents will exhaust all avenues of appeal against this – including going to the High Court.

“None of us would relish it. But if that’s what we need to do to protect the air that we breathe, then that’s what we’ll have to do. We’d prefer it if the EPA looked at it on its merits, and decided it was a bad idea,” he said.

Ken Moran, who is also a LAP member, added: “You cannot burn one tyre in your back garden due to the amount of good legislation which is out there. It just does not seem to make sense that it is okay for Irish Cement to burn more than one million tyres a month. I’m an asthmatic, but choose not to smoke. But we will all be passive smoking on a massive scale if this goes ahead.”

He indicated that it would not be possible for Irish Cement to only use tyres in its plant, given fact only limited quantities are piled up in yards around the country.

Irish Cement communications boss Brian Gilmore has previously said if the firm did not get permission to change process, it’s 80 jobs would be put at risk.

“I think it’s disgraceful from Irish Cement to be scaremongering people like his. This is their livelihoods and their employment,”  Cllr Collins said.