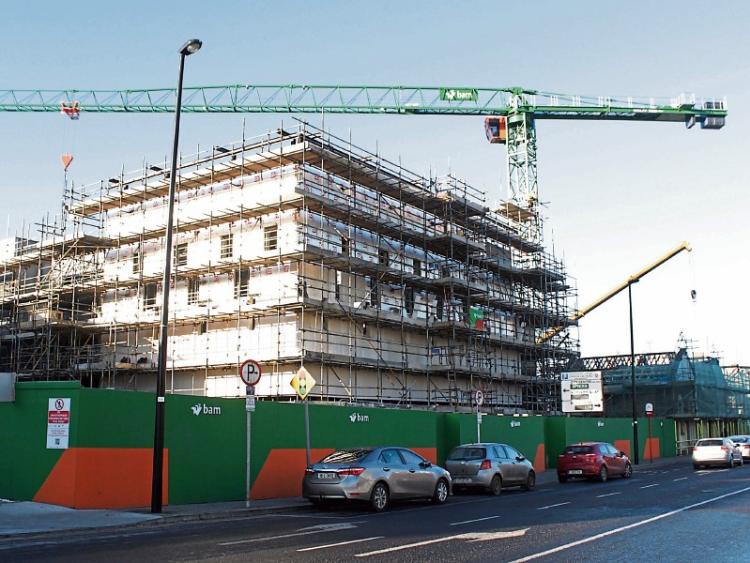 Construction of the new courthouse is continuing - Picture: Michael Cowhey

THE Courts Service of Ireland has been criticised over its decision not to include any ‘public’ parking spaces within Limerick’s new multi-million euro criminal courts complex.

When it opens in twelve months’ time, the complex will incorporate six court rooms, custody facilities and a number of offices.

The facility, which will be 7,350 square metres in size, is being built at a site, known locally as Costello’s Yard - which is adjacent to Limerick Prison.

Construction work began last year after BAM Building (formerly Rohcon) was awarded the contract for the project by the National Development Finance Agency.

Concerns have been expressed by a number of stakeholders about the lack of parking within the new development and the impact this may have on traffic in the immediate vicinity of the complex.

A spokesperson for the Courts Service has confirmed there will be no facility for members of the public –  including witnesses and jurors – to park when attending court.

“There will be car parking for staff, An Garda Siochana, the Prison Service and the judiciary. There will be no public parking in this or in any new court facility we build,” he said.

Solicitor Darach McCarthy, who is a committee member with the BAR Association in Limerick, has accused the Courts Service of ignoring the real concerns of court users.

“The attitude has been frightening there has been no consultation and I have grave concerns. There has been a gross disregard for the needs of court users – particularly jurors and potential witnesses,” he said.

The Limerick Leader understands that concerns in relation to parking and traffic management at the new courts complex were first raised more than a year ago and at a number of high-level meetings since.

“We have a policy of locating court facilities near public transport, or central to a town, or near publicly available parking facilities. In Limerick there is plentiful public parking in nearby facilities," said the Courts Service spokesman.

Limerick City and County Council has echoed this view with a spokesperson insisting there is sufficient parking in the immediate vicinity of the new complex to cater for demand.

He added the provision of traffic and parking provisions in respect to staff and public users of the new courthouse have been addressed by the planning process.