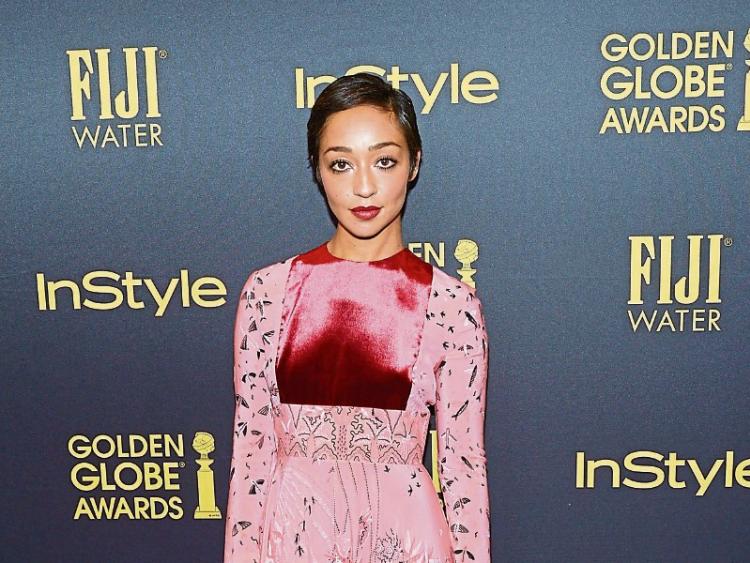 ACTRESS of the moment, Ruth Negga, who is tipped for an Oscar nomination, has spoken of her longing for home – despite the apparent glamour of touring the globe.

In an extensive interview with the Irish Voice newspaper in the US, Limerick raised actress Negga, 34, spoke of her life travelling the world in the continuing publicity blitz for her new film Loving, which is receiving rave reviews from critics and the public alike in the US.

It is due for release in Ireland in February. The Palm Springs International Film Festival has also selected her to receive for its Rising Star Award in January.

“Ruth Negga’s performance as Mildred Loving is one of the year’s most luminous and striking portrayals,” said festival chairman Harold Matzner.

Past recipients of this award include Alicia Vikander, Jennifer Lawrence, and Scarlett Johansson. She was also recently photographed for the Los Angeles Times, alongside actresses Amy Adams, Annette Benning, and Natalie Portman as the ‘ones to watch’ in Oscar season.

“I’m quite homesick at the moment because I’m spending a lot of time promoting the film,” the actress, who comes home as much as she can to visit family here, said.

She mainly lives in London with her boyfriend, the actor Dominic Cooper.

“That’s just a stone’s throw from Ireland and I’ve been away for too long. I do get homesick now at this stage. But funnily enough – and I’m not just saying this – it’s one of the parallels with Mildred Loving (the woman she plays in the movie) and myself. There’s a deep homesickness in her too. It helped me understand her character.”

Based on a true story, Mildred is forced to leave Virginia, where in the early 1960s it was illegal for interracial couples to marry, and pursue a legal case.

“I would ask myself, ‘God, imagine being told I could never go home to Ireland again?’ I immediately felt this wave of homesickness about it,” she says.

She has said that her experience of growing up Ethiopian-Irish in Limerick was delightful, and that she didn’t encounter any racist sentiment until she moved to London.

“I think that each person’s experience in Ireland is quite individual. When I was little I thought that everyone wanted to hold me as a baby because I was this thing of fascination,” she recalled.

“I didn’t know any black people in Ireland. There were none where I was growing up.,” said Negga, who went to national school in Roxboro, and later spent part of her secondary school at Scoil Carmel on O’Connell Avenue, before moving to London and completing her drama studies at Trinity College Dublin.

“I remember seeing my first punk rocker in Limerick and he just absolutely flabbergasted and amazed me in a brilliant way. I was fascinated,” Negga recalls.

“I have a very large family and I just felt very loved. And also because my dad had died as well (in a car crash when she was seven) there was probably an extra set of defences around me.

“A lot of my friends are moving home to Ireland now. I think it’s because they miss that shorthand. I do sometimes feel a bit misunderstood because you know that relief when you’re among Irish fellow people and you’re not being misconstrued? You’re free to use certain words. Some people say to me ‘you don’t sound very Irish’. It’s because I have this tendency to iron out my accent. Not because I’m ashamed of it, but because it makes my life easier if I don’t keep having to repeat myself.”

In her work she said that what interests her is storytelling – not being famous.

Recently, she also read a ‘Modern Love’ story in the hugely popular series by the New York Times for one of their podcasts in the series. It is available to listen to online.