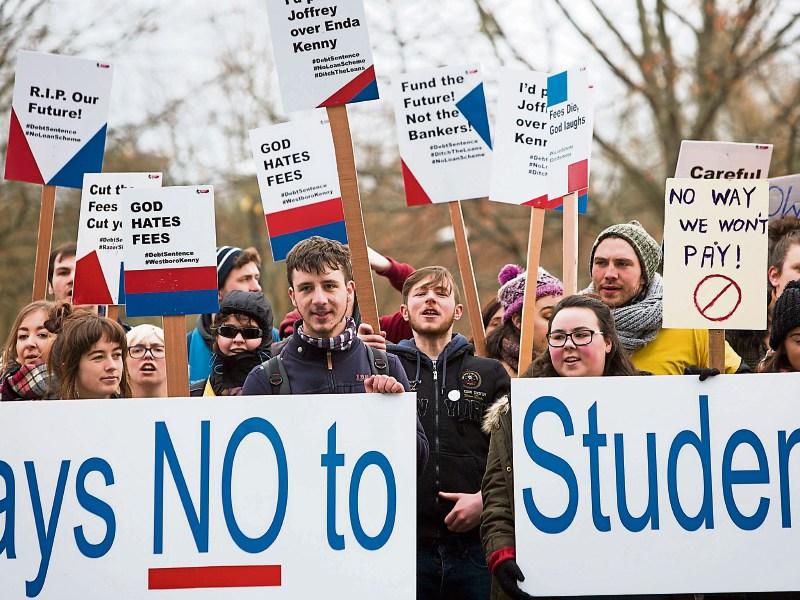 ONE HUNDRED students protested against annual third level fees as An Taoiseach Enda Kenny arrived via garda escort at University of Limerick.

Students representing a number of campus societies, including youth wing political parties, grouped together, chanting and raising their placards, while eagerly awaiting An Taoiseach’s arrival. 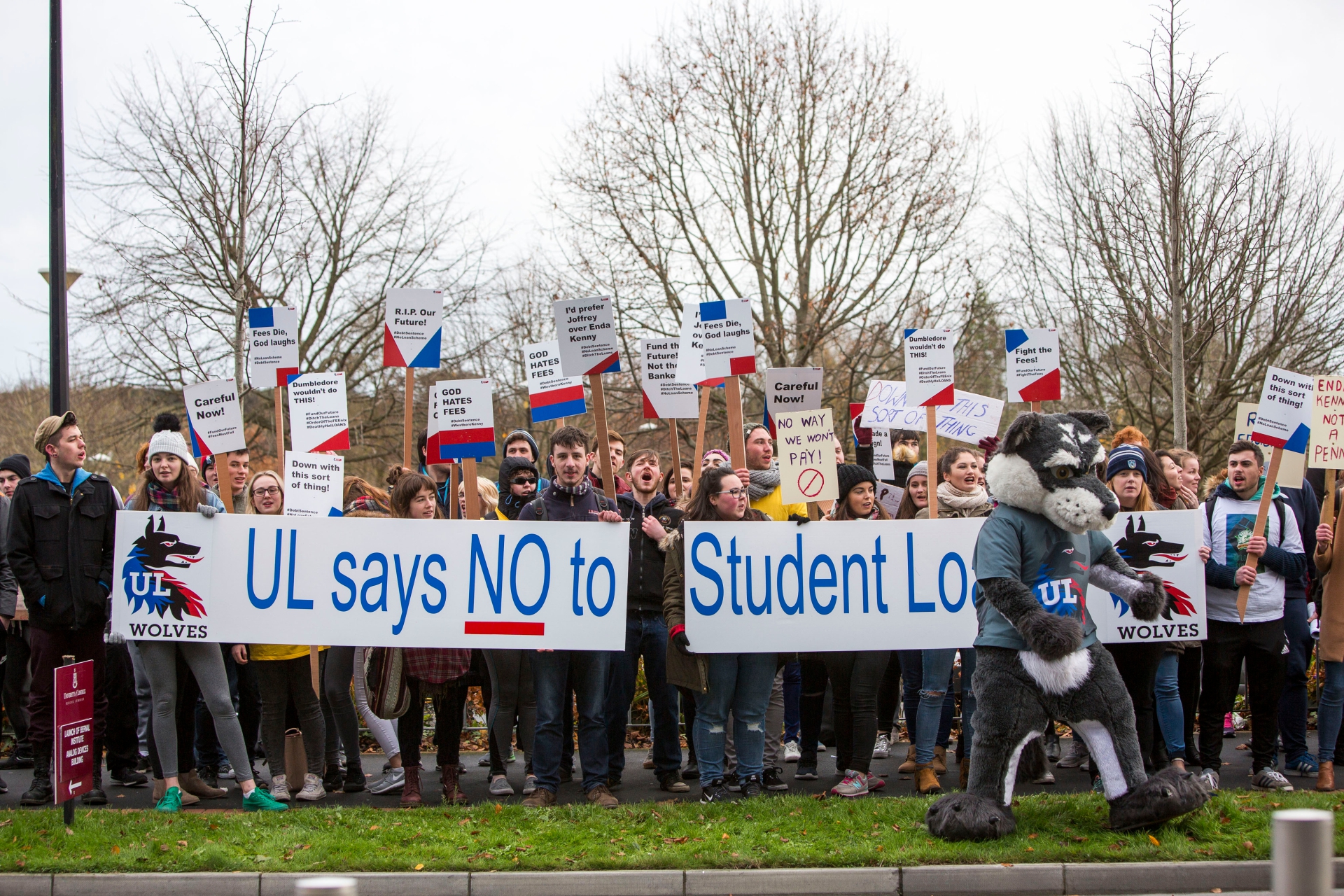 The protest, according to UL Students Union’s academic officer Donal Foley, was in response to the Government’s recent Cassell’s report, which outlines potential options for student fees in the future.

Mr Foley was joined by ULSU welfare officer, Caolan O’Donnell, Castletroy, at the protest and both waited for Mr Kenny’s exit to present him with a letter, containing proposals to fully-publicly fund annual fees. 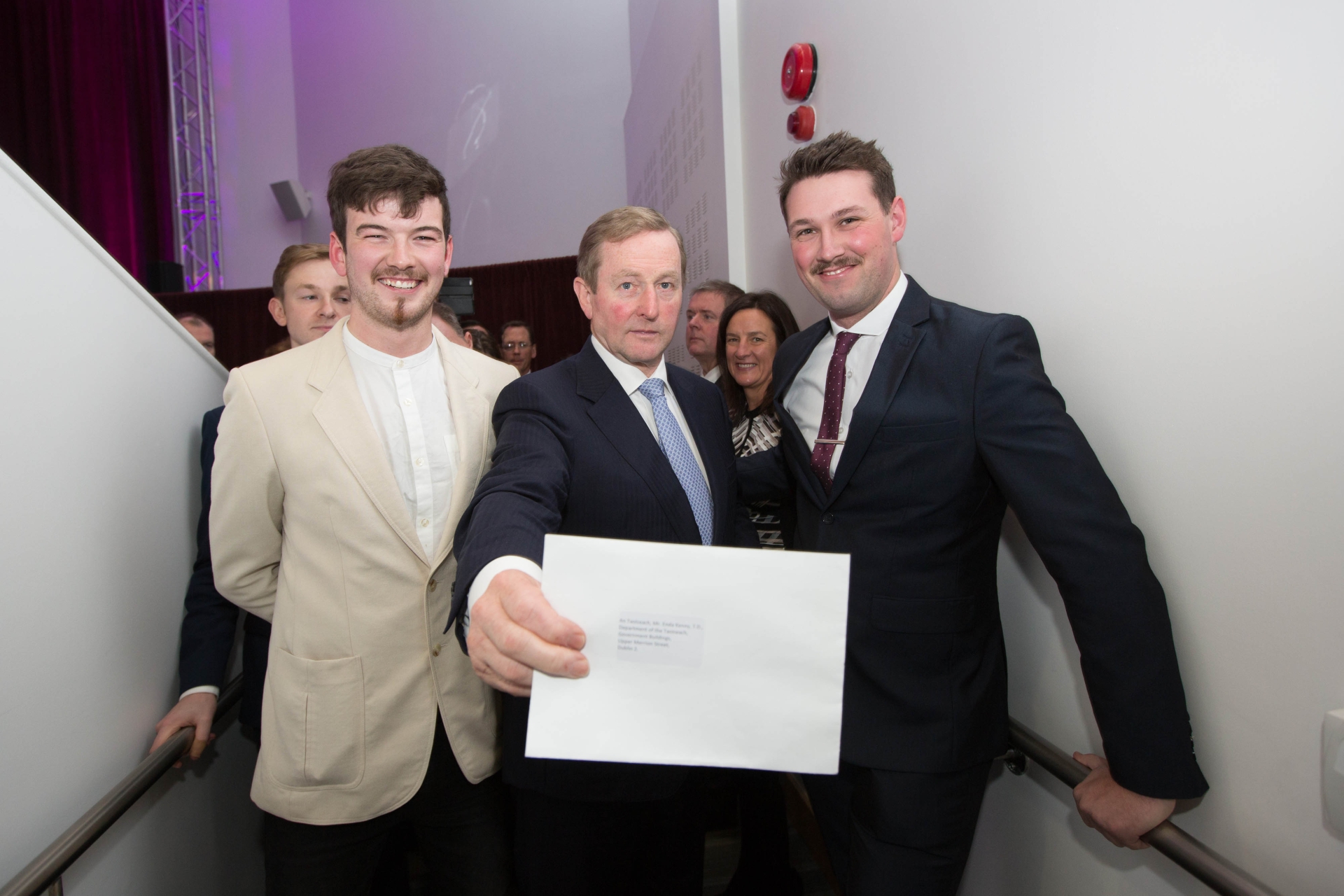 While Mr Kenny dodged being questioned by the media, he spoke with the two young graduates after launching the Bernal Institute to discuss their proposals.

They both challenged Mr Kenny on the issue, and told him that the option of an income-based loan, where graduates would pay their €22,000-€24,000 through their wages, would be “unsustainable”. The third option is to not change the current system of €3,000 in fees a year.

An attentive Kenny let the two elected officials express their opinions, and asked them to elaborate on what they thought the most suitable option was.

“I understand that there are going to be generations that didn’t get free education and they may be a bit sour, but the cycle has to start somewhere,” he told An Taoiseach.

He told Mr Kenny that the United States has €1.3tn in student loans, while Australia’s loan-based system has been described as a “ticking time bomb”.

“So, you would like it completely publicly-funded?” An Taoiseach then asked.

“And that’s your option from the Cassell’s report?”

“Yes. And I will have no problem in paying a higher income tax.”

Mr Kenny said that the Government is working on a strategy to fund third level funding, saying “it’s not just a case of making a decision and saying it’s going to be all publically funded.” He concluded the discussion by commending the two on outlining their proposals.

Speaking to the Limerick Leader afterwards, Mr Foley said that he was glad to meet with An Taoiseach to air their views. Commenting on the interaction, he said: “He was tough but fair. He was able to give us information on what he is going to do. He said he was going to read the letter and consider what the contents of it were. The ball’s in Enda’s corner now.”

In their letter, they propose that corporation tax and income tax be raised to assist the State in paying for fees fully.

“There are going to be other ways to fund fees. But we shouldn’t be letting big multinational corporations take advantage of our country,” he said.

He said that if the Government decides to go with the option of an income-based loan for student fees, it could potentially face debt, as a result of graduates emigrating and those who do not meet the income levels to pay the fees.

“I will pay my income tax to pay for my children’s education,” he said.

During his address at the Bernal Institute launch, An Taoiseach told the audience: “I am well aware of the challenges that are in the third level sector.”

He added that Minister for Education, Richard Bruton is “working hard to try to deliver a sustainable income-generating financial strategy for the third level sector by mid next year. I think we need to engage with all people in the third level sector, looking at what it is that needs to be done, in taking the Cassell’s report and others into account as we try to project a way forward”.