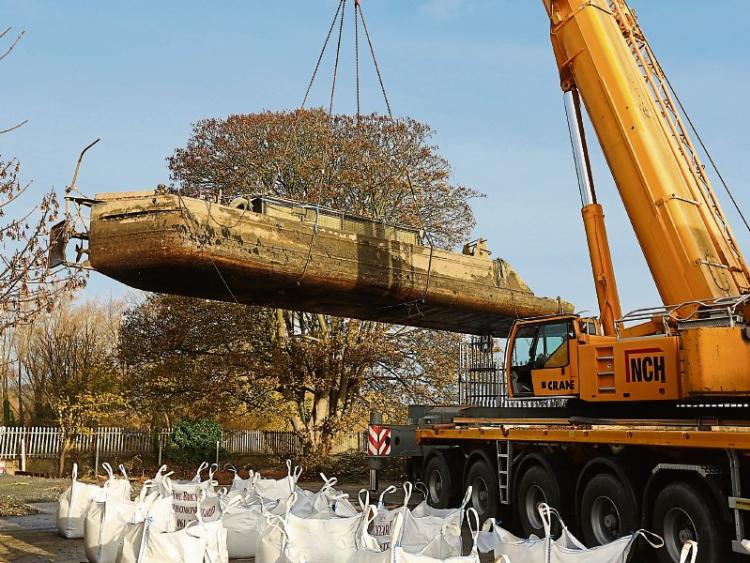 The old Guinness barge was lifted from the Abbey Picture: Press 22

A HISTORIC Guinness barge dating back to 1923 is to get a new lease of life, opening as a floating cafe in Thomondgate.

From early this Wednesday morning, members of Limerick City Build and the Voice of the River group hoisted the 65 foot long, 12.5 foot wide barge from where it is moored at the Park Canal to its new home near the Thomond Weir.

Now, for the next 12 months, Corbally man Ray O’Halloran is to lead a project which will see youngsters from across the northside giving it a major refurbishment including installing a new engine.

Then it will be opened as a floating restaurant on the Shannon.

“We are hoping to tie in with the hospitality training centre at the LEDP to employ youngsters. A lot of training will be provided on the refurbishment too. We will use it as a template for other projects we have going on,” says social entrepreneur Ray. Before the black stuff was transported by road around Ireland, river transport was used to move the stout.

After this practice was phased out, this barge was left sunken in Tullamore, where it remained for 14 years.

But two years ago, having heard about this, Ray arranged to have it moved to down to Limerick, after entering a partnership to Waterways Ireland and Limerick City and County Council.

He said he would expect the restaurant will be running a year from now.

“But we are not going to rush this, as there is a lot of training involved,” he added.

Seamus Hanrahan, a senior executive architect with Limerick City and County Council said: “This project offers strong potential for local involvement and specialist training related to the materials and methods used in the construction of vessels of this period. The council recognises the vast tourist and heritage potential of our waterways, and the role the River Shannon, Abbey River and Park Canal have played over time in enhancing the vitality of the city.”