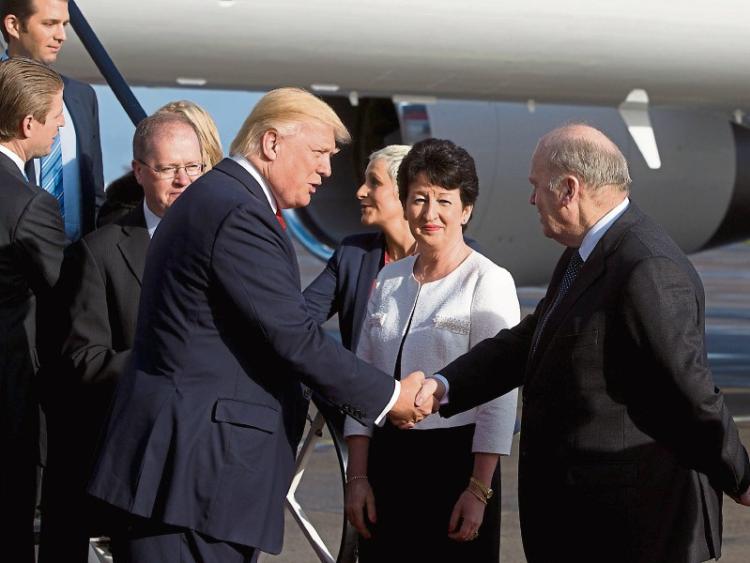 AFTER A stunning victory, the prospect of US President-elect Donald Trump flying into Shannon Airport to revisit his lavish Doonbeg hotel and golf resort looms large.

At 7.32am on Wednesday, American expatriates living in Limerick woke up to one of the biggest shocks in the history of politics, when Donald J Trump defeated election favourite Hillary Clinton in the race to become the 45th President of the United States.

The successful Republican candidate, who paid a memorable visit to Shannon in 2014 and was given the red carpet treatment by Minister for Finance Michael Noonan, said in his victory speech: “I pledge to every citizen of our land that I will be president for all Americans, and this is so important for me. For those who have chosen not to support me, I’m reaching out to you for your guidance and your help so that we can work together to unify our great country.”

And there were a large number of US citizens living here who did not support the Republican party victor. Conor James Keane, a San Franciscan living in Limerick city, said that he was “flabbergasted” when he woke up to the news on Wednesday morning.

“Now more than ever do we see how important it is to get out and vote, or things like this will happen otherwise,” he said.

LIT lecturer Jennifer Moran Stritch — a committed Democrat — was “in shock and disbelief” upon hearing the news that the Republican was to become the next President, and said that she can “see why people are frightened”.

Speaking to the Leader from Washington DC, Carrie Dike said that she was “embarrassed by the American political process more than the candidates themselves”. The Irish World Academy PhD student added that she asks her Limerick friends to “tread gently and find love and compassion for us, instead of judgement and hate”.

Brooklyn native Mary McInerney, of Ardnacrusha, said that she was “gutted” over the result. Tifanny Glenn, of Colorado and living in Limerick city, said that she was “ashamed to be American today.  To think that more than half of the country voted out of fear, and possibly hatred, is a shock to me.”

She said that the result is a “backlash against not only the educated and social elites, but against social progress, inclusivity and equality”.

“Today, there will be so many Americans waking up to the realisation that more than half the country has voted for a man who has marginalised them through his racist, misogynistic, homophobic, transphobic, and anti-Islamic rhetoric, offering them no protection, no shelter from unbridled, vindicated white fear.”

Dublin pianist Terence Browne, who performed for Mr Trump on the tarmac at Shannon Airport, said that during the election campaign, the GOP candidate said that “he thought I was the King of Ireland”.

Terence had met previously with the Trumps in New York at a Steinway Hall Concert to promote Shannon Airport and a new Aer Lingus service. During the runway performance, he played a number of pieces from his Carnegie Hall hit musical, Hazel.

He said that he thinks Trump’s success is “a case of life imitating the 200th episode of the Simpsons, starring U2, in which Homer runs for Sanitation Commissioner in Springfield and wins, with disastrous consequences”.

Corbally man John Hartnett, a Silicon Valley based businessman, said that California - which voted for Clinton - was "shocked".

"CNN reported that Hillary called Trump and conceded. Shortly after president elect Donald Trump spoke at midnight and I hope that his words of bringing the country together will happen.

"As he was speaking we were getting texts from Ireland from family and friends who were shocked. The common theme and question was ‘when are ye coming back to Ireland’?

"It is hard to imagine that Trump will become president of the most powerful nation in the world. He has proved us all wrong so far so I sincerely hope that he can be a great leader,” he told the Leader.

UL international relations lecturer, Scott Fitzsimmons said that, given the shocking outcome, both Democratic and Republican parties “must reform their candidate selection process to ensure that no one as unqualified as Donald Trump ever gets close to the White House again”.