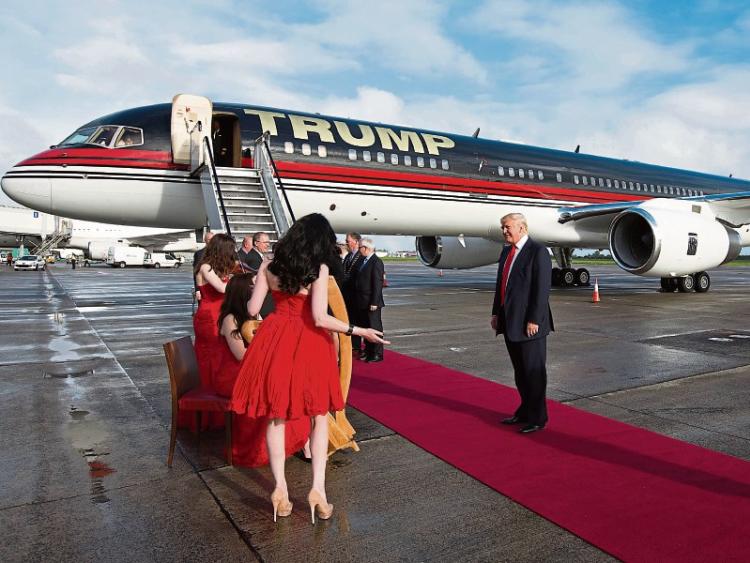 Donald Trump is welcome to Shannon Airport in 2014

DONALD Trump has been elected the 45th President of the United States in a stunning victory over Hillary Clinton.

The 70 year old businessman, who owns a hotel and golf resort in Doonbeg and paid a memorable visit to Shannon in 2014 where he was given the red carpet treatment by finance minister Michael Noonan, defied polls, odds and predictions to win in the most divisive American election in history. 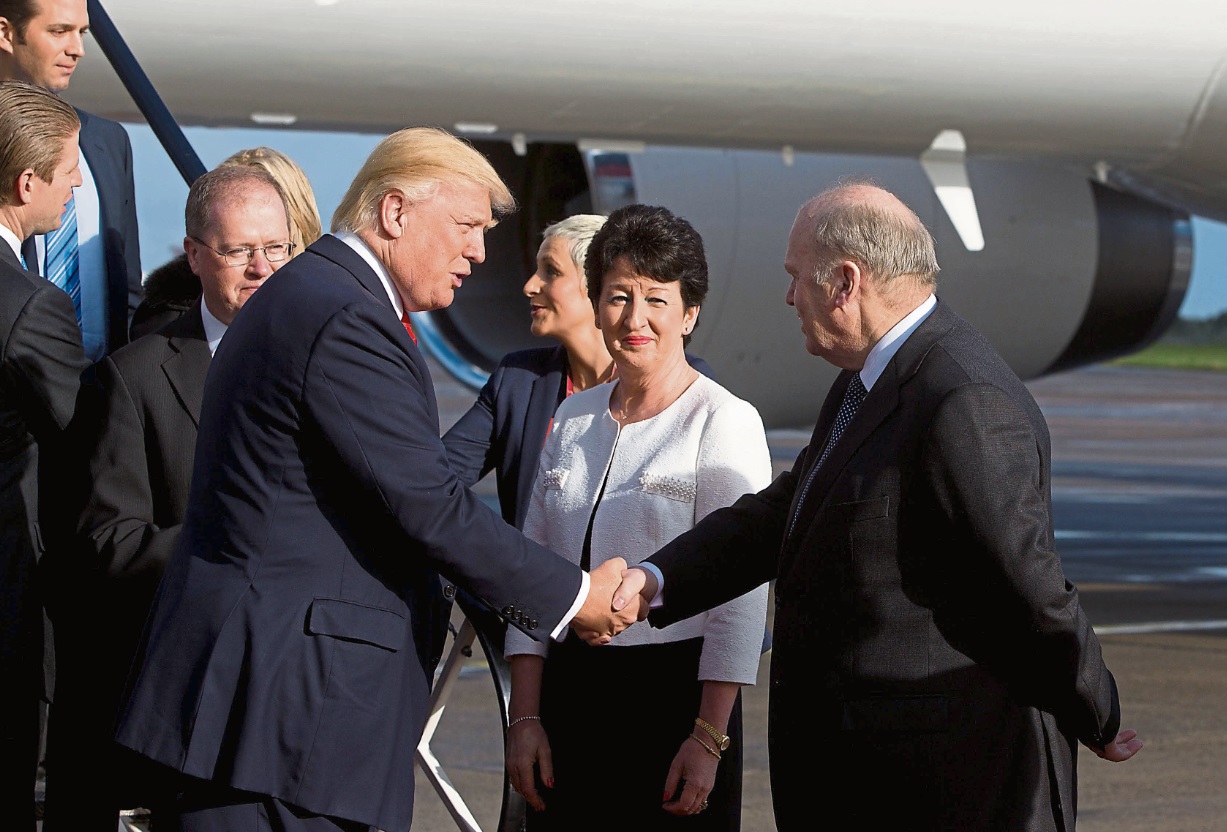 The Republican gave a victory speech in Trump Tower in New York this Wednesday morning.

“Now it’s time for America to bind the wounds of division. I say it is time for us to come together as one united people,” he said.

“I pledge to every citizen of our land that I will be president for all Americans, and this is so important for me. For those who have chosen not to support me, I’m reaching out to you for your guidance and your help so that we can work together to unify our great country.”

President-elect Trump paid tribute to his opponent, who conceded in a phone call shortly before he went on stage at 7am this morning.

“I just received a call from Secretary Clinton. She congratulated us, it’s about us, on our victory, and I congratulated her and her family on a very, very hard fought campaign. She fought it very well. Hillary has worked very long and very hard over a long period of time, and we owe her a major debt of gratitude to our country.”

"I will be a president for all Americans" - Donald Trump declares victory on #ElectionNight https://t.co/eSW5ejmesq
https://t.co/V3zf1BdWEd

Limerick man John Hartnett, a Silicon Valley based businessman, said that California - which voted for Clinton - was "shocked".

"Like many Californians we rushed home early this evening to get our vote cast in Silicon Valley - the normal rush hour traffic was lighter than normal as everyone was eager to get home to switch on CNN. This is a strong democratic state and a sure bet for Hillary. However little did we know as we were voting the damage was already happening on the east coast three hours ahead of us," said the Corbally native, who established and chairs the Irish Techology Leadership Group (ITLG) which brought its annual conference to Limerick in January 2014.

"We sat up all night anxiously watching each state vote come in - slowly but surely each state was turning red. All eyes were on Florida as victory there would set the path for presidency and here was the first shock of the night. We sat up through the night with our kids hoping that Hillary would make a come back and unfortunately even California couldn't save her.

"We were shocked, speechless and saddened for this great country.

"CNN reported that Hillary called Trump and conceded. Shortly after president elect Donald Trump spoke at midnight and I hope that his words of bringing the country together will happen.

"As he was speaking we were getting texts from ireland from family and friends who were shocked.. The common theme and question was "when are ye coming back to Ireland"?

"It is hard to imagine that Trump will become President of the most powerful nation in the world . He has proved us all wrong so far so I sincerely hope that he can be a great leader."

Devon Kerins, born in Montana and now living in Rosbrien, who was a Bernie Sanders supporter, said the result was "a big shock to me".

"I never expected this to happen. The big thing for me has always been climate change, and Trump has denied that, and I found that to be really disappointing," she said.

She believes that people didn’t vote for Hillary Clinton because “they didn’t trust her, because she was part of establishment”.

Mr Trump bought Doonbeg for around €10m in 2014 and promised to invest upwards of €45m in the resort, which has undergone major upgrade works.

Mr Noonan said at the time of the investment that it was “great news for Clare” and “great news for the tourism industry in the Mid-West, and it’s great news for Shannon Airport because I’m sure he’ll fly a lot of the top golfers in through here”. 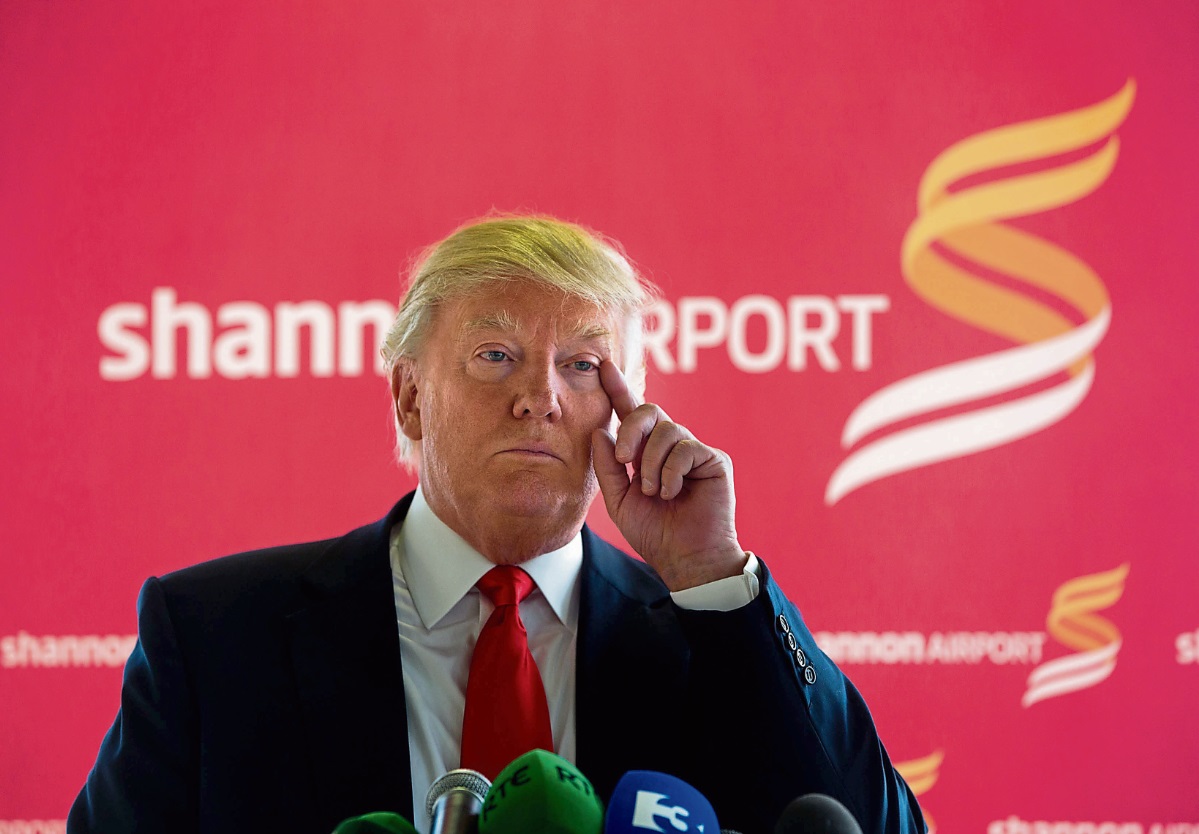 Mr Trump said at the time: “I love Ireland. It is a special place, special people. There is a tremendous level of energy and brainpower in Ireland and I like those two qualities, I like them very much.”

His incendiary comments during the presidential campaign drew criticism on both sides of the Atlantic, with Taoiseach Enda Kenny describing his comments about immigration and the Middle East as “racist and dangerous”.

"On behalf of the Government and the people of Ireland, I am pleased to offer our sincere congratulations to Donald J Trump on his election as the 45th President of the United States.

"Ireland the United States have enjoyed a very close and warm relationship for many generations and I am confident that under his leadership, our bilateral relations will continue to prosper.

"Also we think of Hillary Clinton, a friend to Ireland who fought such a tough campaign," he added.

The reaction online here has been largely one of disbelief:

Striking thing about much of the pro-Brexit & pro-Trump vox populi that I saw; they rationalised their position via regurgitated propaganda.

Given the direction America"s voting, just found a great house in Limerick, Ireland. Might be time to go back to my roots

My daughter voted with an absentee ballot from Limerick, Ireland! #ProudMomma

Tonight was clearly emotional for this Clinton supporter - he has a moment with at 'Hillary' banner in front of stage at @javitscenter pic.twitter.com/lRjQY3mhFB