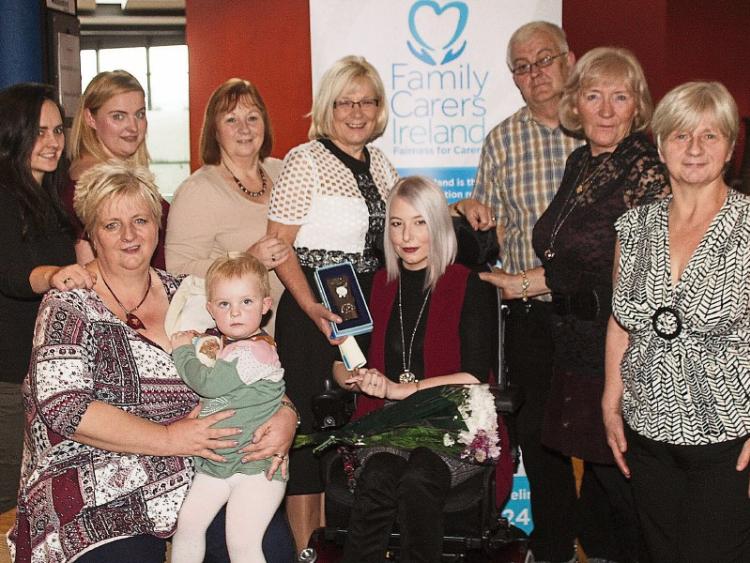 Mid-West Carer of the Year Dorothy Meaney, surrounded by family and friends, including daughter Zondra

A DOORADOYLE lady who provides round-the-clock support to her daughter who has a rare neurological condition has been named Mid-West Carer of the Year.

Dorothy Meaney gave up work in order to provide care to her daughter Zondra, 33, who has paralysis of her stomach, cervicocranial instability and Chiara Malformation.

And her efforts have been recognised by Family Carers Ireland in the mid-west, who named her the regional carer of the year following a nomination by her daughter.

Now, she will face 11 other carers from across the country at a Grand Final in Dublin’s Westin Hotel later this month, hosted by RTE’s Marty Whelan and Mary Kennedy.

Dorothy revealed she did not realise her daughter had nominated her for the title.

“I'm thrilled and overwhelmed. When I got the phone call, it was a huge surprise. I was over the moon. There has been loads of tears - but I'm delighted. Her nominating me was a beautiful thing. Day to day life can be tough going. For her to do this to me means so much. All I ever wanted in life is to feel appreciated,” she told the Limerick Chronicle.

In her nomination, Zondra, who has a nine year old son Carrick, wrote: “I don’t think she ever expected to be looking after her 31-year-old daughter full-time like this, and I can’t help feel bad this is how it is for her. My mam has to be a mother, friend, companion, nurse, grandmother and carer.  It is a lot of roles to lead and she does them all brilliantly.”

Zondra added: She has sacrificed her life for me and my son. I am so proud she has won. It really shows what carers do. They give their whole life each week.”

“She really put out there what 24/7 caring is. Caring is such a hard role. Sometimes people can become very isolated. With Zondra's application, you could see she draws strength from her mum, and they remain strong for each other. That is so important,” she said.