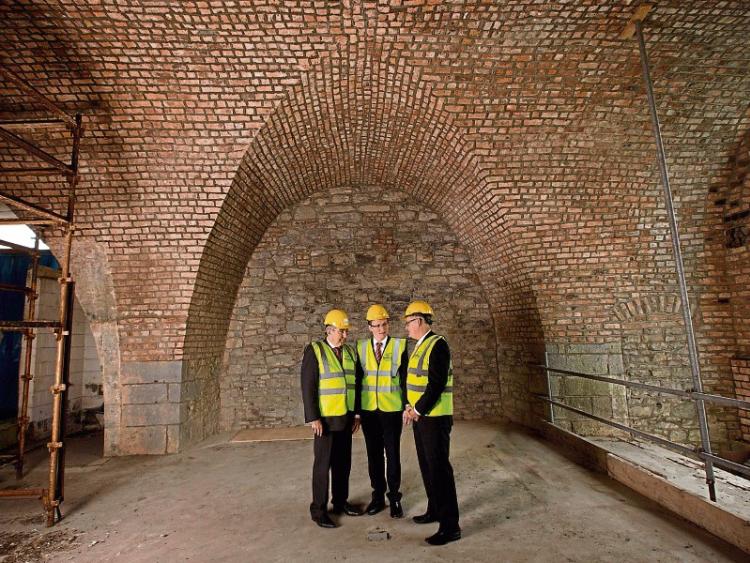 THE redevelopment of the Hanging Gardens as prime office space has taken a huge leap forward after councillors sanctioned a €16m loan for the project.

Conservation work is already under way to repurpose the 0.6 acre Henry Street site as a multi-storey office block with space for 700 workers.

And, the council says it expects workmen on site early next year, with the project complete by the second quarter of 2018.

The council purchased the derelict Henry Street site from Nama back in 2013, paying just €800,000 at a building once valued at close on €30m.

Councillors unanimously agreed proposals to secure a loan which head of finance Sean Coughlan says will “finance the development of the Gardens International”, the new name of the project.

He added: “The development will have a unique character, enriched by the combination of dynamic, contemporary architecture and old heritage buildings, and will be Limerick’s first city center LEED gold certified office scheme, an international programme which recognises best in class building strategies and practices.”

Some €10m of the €16m loan will be available immediately, while Mr Coughlan added it is structured in such a way which means principal repayments may not be made until the development is occupied.

Fianna Fail’s leader in the metropolitan district Cllr James Collins, who also sits on the board of Limerick 2030 said: “We have seen this as a catalyst to reignite the commercial office space market in Limerick.

“This [project] is in response to the IDA telling us there is a strong pipeline of jobs coming in, but the main obstacle is a lack of suitable office space.

“This is why the council has intervened. Now we are following with the funding stream to allow the project progress to the next stage.”

Situated at the former general post office (GPO) building - at 16 to 18 Henry Street - the area has lain idle for the last eight years, and is considered by many to be an eyesore, with the shell of the building open.

Its unique name was conceived by the 19th century banker William Roche, who originally owned the building, and built enclosed gardens growing exotic fruits like oranges, grapes and pineapples within the site.

The motion to draw the loan was proposed by Cllr Collins and seconded by Sinn Fein councillor Seamus Browne.