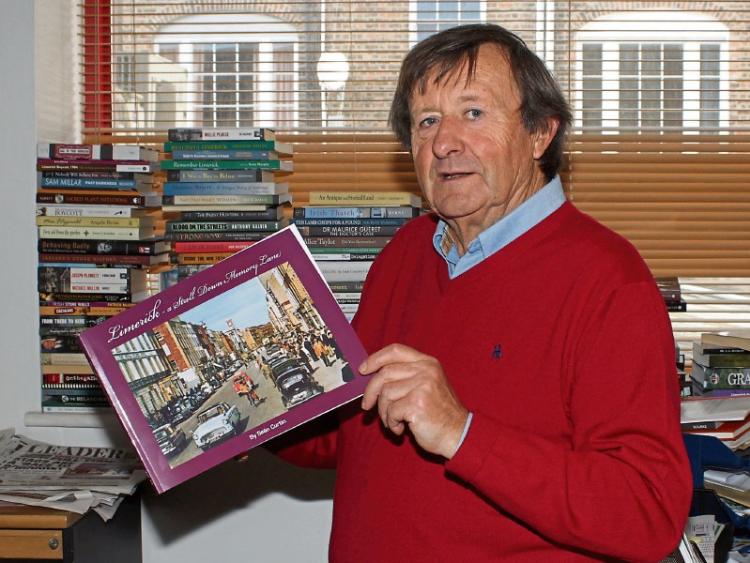 Sean Curtin pictured with his new book, Limerick: A Stroll Down Memory Lane

AN EDWARDIAN Limerick woman in a high-necked wedding dress with a ruffled bodice gazes down the lens of the camera capturing her image, while her new moustached husband looks on.

Across the page, the same family is photographed again in formal wear, with two white-clothed babies at a christening.

The woman later appears dressed head to toe in black, without her husband, and with two children at her side.

These incredible photos seem to tell a story about a well-off family who lived more than a hundred years ago, documents from the most significant points in their lives. The photographs, from a set of over 200 glass plates, were found in a skip on O’Connell Avenue.

They make up just a few of more than a hundred photos in Limerick, a Stroll Down Memory Lane, the 16th volume of the historical photo book by local man Sean Curtin.

“Sometimes people say I live in the past, but I’ve just got a love of old photographs,” said Sean, who used to work at the Limerick Leader.

He has released a volume every year since 2001, but he never reuses photographs, saying that “my great fear is using the same photo twice”.

“People give them to me, and in the early days I used to get permission from the Limerick Leader and I used to trawl through the archives.” he said. He also said that he delves into library archives to uncover many of the long-forgotten photographs.

The pictures are accompanied by text, revealing the stories behind the scenes. Titbits of information have been provided by other knowledgeable locals, including Sharon Slater, Pat Kirwan, John Wilson, and Mick O’Rourke from Ennis.

Included in the book are dozens of documents, including a 1590 hand-drawn map of Limerick city.

In one of life’s little ironies, Sean notes, a prize for a 1945 raffle in aid of Barrington’s Hospital was a princely 200 cigarettes. Of course, a hospital raffling off a carton of cigarettes wouldn’t have seemed so strange at the time.

The great gunpowder explosion of 1837 is recounted in the book, as told through a 1953 article from the Limerick Chronicle.

The tragedy in the city centre took 11 lives, but also produced many incredible stories of survival.

The explosion, written in the Chronicle as “a catastrophe of a most lamentable character”, occurred on the premises of William Richardson, gunmaker and gunpowder merchant, on 1 George’s Street.

In the house next door, a Mrs Ryan and her children slept soundly until the explosion blew the house into ruins. The family miraculously survived. One of the boys, William, was “blown up in the air” on his mattress, and came down on the street some distance away, with the mattress “blazing around him”. According to the article, he slept all the while, and sustained no injuries. His brother Edmund also survived, and later became the Mayor of Limerick.

Another woman in the house had no idea that anything had happened, until she woke up the next morning in Arthur’s Quay, buried underneath a pile of rubble. Some people were also blown into neighbouring houses.

Between the covers lay dozens of human stories like this one from the Limerick of the past.

The production of the book is labour intensive, with many others lending a helping hand. Many of the images were in need of restoration, and Sean especially thanks the “computer wizardry” of photographer Billy Butler.

The burgundy-covered 16th volume features a bustling, vibrant O’Connell Street in the 60s on the front.

It will be available in shops throughout the city, as well as the Milk Market on Fridays and Saturdays, in the run up to Christmas.

Sean’s love of old photographs endures, and he hopes to keep making the books until volume 20, at the very least.

“It’s Limerick’s history, and if they’re not published, people won’t know what Limerick was like, in the old days and in the not too distant past either.”