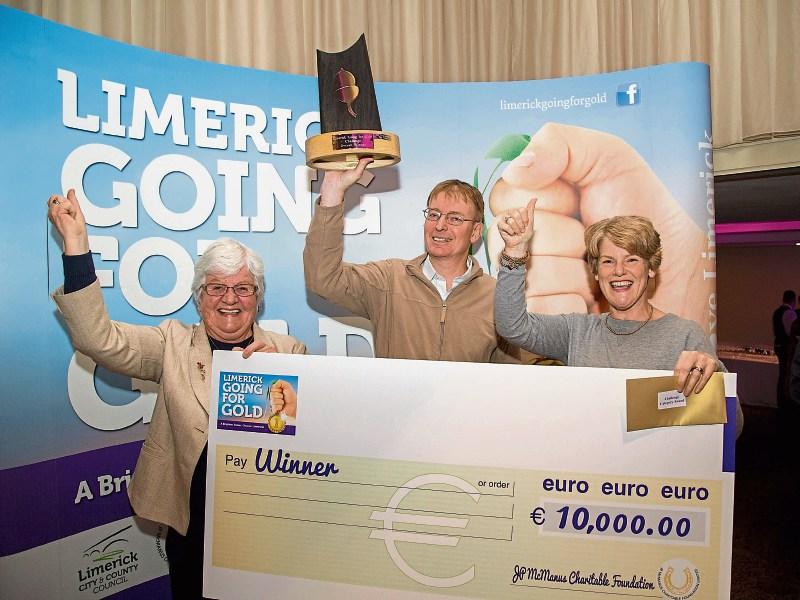 Glin Development Association has been crowned the overall winner of Limerick Going for Gold 2016.

There were jubilant celebrations at The Strand Hotel on Tuesday evening when it was announced by JP McManus that the coastal village in West Limerick had won the top prize of €10,000.

Over 140 applications were received for this year’s competition, which was funded by the JP McManus Charitable Foundation and run by Limerick City and County Council.

This year marked the fourth year of the Limerick Going for Gold campaign and for the second year running the overall competition was open to community groups from across County Limerick.

Five groups secured a place in the grand final during a series of weekly public text votes over the summer with a panel of local judges selecting a further seven wildcards.

Prizes were also awarded in a number of other categories, including Limerick in Bloom (Ardpatrick) and Best Estate/ Residential Area (Glenbrook/Glendale/Glendale Lawn).

Rockhill / Bruree Tidy Towns was awarded €3,000 for being the most improved local entrant in this year’s national Tidy Towns while Neillie Barrett from Newcastle West was also a winner  in the Best Front Garden competition (sponsored by the Parkway Shopping Centre).

Mayor of Limerick, Cllr Kieran O’Hanlon, congratulated everyone who took part in this year’s Limerick Going for Gold.

“It’s through the hard work and the commitment of the local communities that ensures that Limerick Going for Gold continues to be a tremendous success.  Who would have thought that the competition, which began in 2010, would have grown so much and captured the imagination of everyone, and become the success that it is,” he said.

Gerry Boland of the JP McManus Charitable Foundation said he is delighted with the efforts being made by communities across the city:

“Individuals, Tidy Towns Groups and residents’ associations from across Limerick city and county have once again come out in numbers to support this initiative.  One hundred and forty four groups participated this year and your participation and the voluntary work that you are doing creates a real sense of community in your local areas,” he said.

Gordon Daly, director of service operations with Limerick City and County Council said Limerick Going for Gold is now firmly established as one of the premier events on the local authority’s calendar.