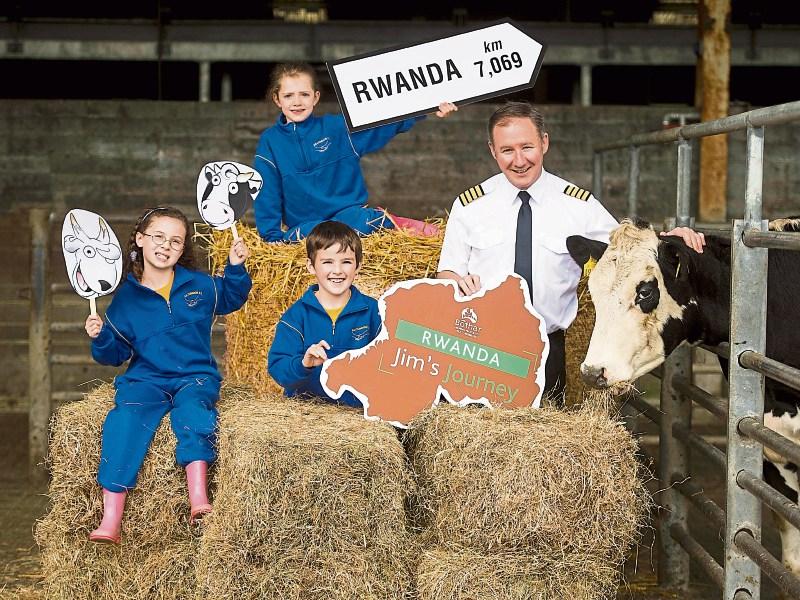 AN airlift of 5,300 animals has taken off from Shannon Airport, bound for impoverished families in Rwanda.

The Bóthar ‘Ark’ – marking the Limerick based charity’s 25th anniversary of its first ever cargo flight – took off on Monday evening from the airport.

It is being accompanied on its travels by All Ireland winning Dublin manager Jim Gavin, a qualified pilot and an Assistant Director with the Irish Aviation Authority.

The Dublin manager is one of two ‘groomsmen’ on board the flight, as Bóthar carries out the biggest ever multi-species airlift of its kind in the world to Rwanda.

Also on board are 5,000 doses of Bovine Semen for the Rwandan Breeding Programme run by Bóthar’s sister agency Heifer International.

Mr Gavin said accompanying the flight was “a privilege”.

“To be able to witness first-hand the transformation of the lives of some of the poorest people in the world is definitely a privilege,” he said, having first met the farmers who donated the animals at Roscrea mart.

“It was great meeting the farmers, including some back from my West Clare where my parents come from. Their generosity is incredible, not least when farm incomes are under pressure. They are handing over animals over that are worth up to €1,000 and at a time when many farmers are struggling to break even.”

Bóthar CEO Dave Moloney said it was the aid agency’s “most important ever airlift”.

“It’s our 25th anniversary airlift so that has a lot of nostalgia for us but it’s also the biggest ever multi-species airlift in the world,” he said.

“t’s the fruits of many people’s labour, from our own team, to those who donated money to help purchase some of the animals, the farmers who donated them and raised them, the team at Shelton Abbey and Loughan House prisons for raising others, our sponsors MSD, Dovea , VIVA (Volunteers in Irish Veterinary Assistance) and Truly Irish pig co-op.

“We’re particularly indebted to the farming community.  At a time when milk prices have only started to slowly recover from a massive drop, farmers have still come up trumps by donating quality heifers. Save for other Bóthar cows already in the field in Rwanda, these will be the best cows in the entire country and will change the lives of the recipient families, whose struggle is something none of us back home here in Ireland appreciate.”

The public can keep up to date with the trip on the Bóthar website www.bothar.org where daily video and blogs detailing the progress will be posted.