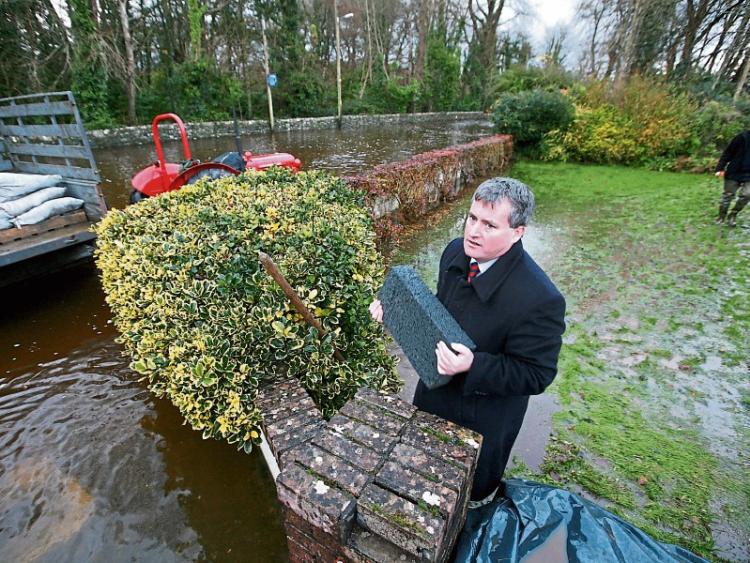 Senator Kieran O’Donnell fights flooding in Castleconnell in 2009; a report this year said there was ‘no risk’ to any properties’ Picture: Press 22

THE OPW will shortly bring forward flood plans with mapping and defence measures for Castleconnell and Montpelier, Senator Kieran O’Donnell has confirmed.

It follows last month’s public outcry after a draft flood risk management plan stated “there is no flood risk to any properties” in Castleconnell.

A large crowd attended a public consultation day in the Castle Oaks House Hotel and there were numerous submissions before the September 23 deadline.

Brendan Murphy, local resident, described the quote in the report as “mind boggling”.

“I was horrified, I just couldn’t believe it. Our whole house was flooded in 2009. We were out of it for four months,” said Brendan. Last December and January he had a pump going for five weeks to keep the rising waters at bay. He asked the powers that be to “please explain this”.

This week Senator O’Donnell has welcomed confirmation from Minister for the OPW and Flood Relief, Séan Canney, that preparation of flood plans for Castleconnell and Montpelier is now underway.

“He confirmed to me at a finance committee hearing that the  OPW  will shortly be bringing  forward flood plans with mapping and defence measures for Castleconnell village and Montpelier.

“I very much welcome this good news for residents in the Castleconnell and Montpelier areas. The devastation caused by the floods in both 2009 and more recently in late 2015 and early 2016 is still very fresh in everyone’s minds.  The  OPW  is currently working on these in conjunction with Jacobs Consultants and Limerick City and County Council.

“Inclusion of flood defence plans for these areas in the OPW's CFRAM study is a vital step in prioritising the building of flood defences here. The fact that flood plans for both these areas were missing from the current draft of this OPW flood risk plan was truly shocking and had to be changed.

“The large turnout at the public consultation in the Castle Oaks House Hotel and subsequent campaigning by everyone has ensured that these plans are now underway.

“Minister Canney also confirmed to me that once these plans are ready there will be a further public consultation with local residents and I would again encourage residents to attend. I would anticipate this will happen reasonably quickly and before the end of the year,” said Senator O’Donnell.