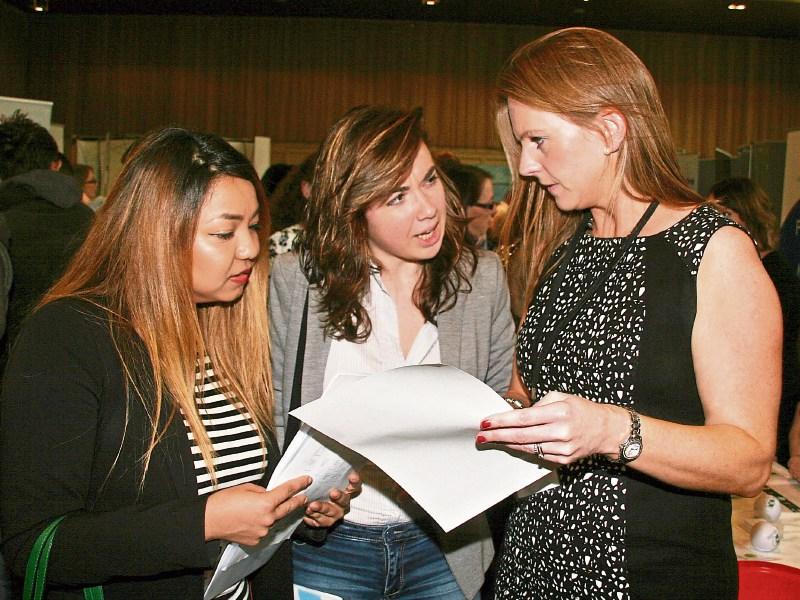 HUNDREDS of people turned up at the Strand Hotel this Friday in the hope of finding their dream job, as more than 100 jobs were on offer at the annual Mid-West Jobs Fair.

Stalls from all manner of locally-based companies lined the function room, fielding questions and accepting applications from jobseekers.

Mike Kiely is one such jobseeker. He has been out of work for more than six years, after losing his job in a betting shop in 2009. The Corbally man has been on the live register ever since.

“At the moment I’m looking for anything at all, I’m not fussy. Six years is a long time, and it’s not for want of trying. But there does seem to be a turnaround recently,” he said.

Mr Kiely has attributed his difficulty with finding work to the increased number of jobseekers and the popularity of short term contracts.

“We’re looking for full-time contracts — even a year contract would be good at this stage,” he said.

Martin Russell from Bruff agreed: “I’ve worked for a couple of places over the past year even, all the jobs were short-term contacts, just a few weeks at a time.”

Amy Clancy was another person looking for a job, despite currently being employed in a deli. She said that she was looking to change occupation in favour of “something in customer service or in an office — I’m just looking for something different”.

“I found the day great, everyone was very friendly and I applied for a good few places,” the Dooradoyle woman said.

“There are probably loads of people who are more qualified applying, but hopefully… I’m still very optimistic.”

Amy said that she hadn’t seen the jobs on offer at the fair before online, even though she checks job websites regularly. “It was definitely worth going,” she said.

Many of the jobs on offer seemed to be in telecommunications jobs, according to web designer Simon Geoghegan, from Shannon.

Mr Geoghegan has recently developed a website for a company, but said that there’s no stability in the jobs market.

“I’m working at the moment, but they’re month to month contracts — well, either one or three month,” he said.

“The jobs fair is good. You get a CV into a load of places and it’s good to get feedback.”