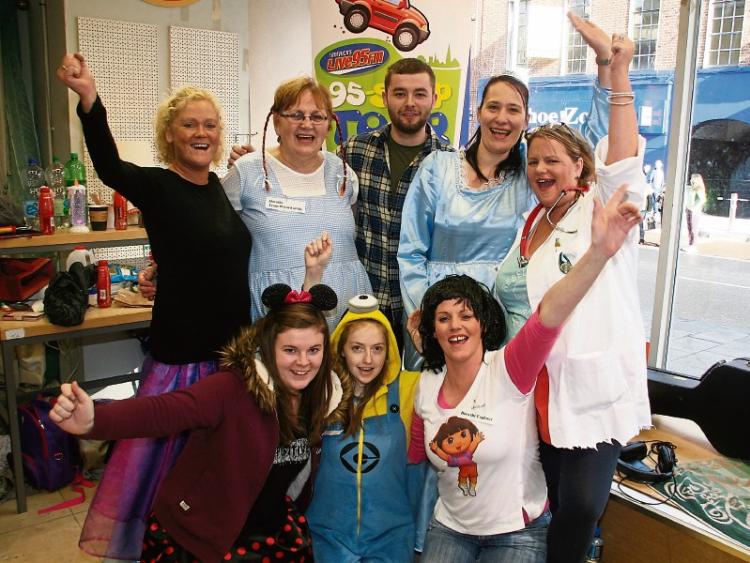 CROWDS of people gathered in Guiney’s store on William Street today for the last event in the five-day 95-stop-tour run by Limerick's Live95fm, where they were joined by popular Irish rock band The Riptide Movement.

Staff from the radio station and Guiney’s dressed up in costume as various children’s characters such as Dorothy from the Wizard of Oz and Dora the Explorer spent the night in the shop window, while others had their legs waxed for charity.

The annual fundraising event, which began on Monday, is in aid of Cari, the Children’s Ark and the neonatal unit at University Hospital Limerick on the Ennis Road.

Donations will be used to purchase vital medical equipment which will help the treatment and protection of Limerick’s newest arrivals for years to come. We’re living on the window for 24 hours from 11.30am yesterday to 11.30am today to raise money for Limerick kids. We’ve been waxing, we’ve had a knicker challenge and a fashion show. We’ve been up all night, we’ve been dancing all night, and we’ve had a ball,” said store manager Alison Stubbins.

The fundraising initiative, now in its third year, has raised hundreds of thousands of euros for Limerick children and this year it is hoping to break the €500,000 mark.

The tour began on Monday with a live broadcast from the Adare Heritage Centre.

On Tuesday, Limerick Today was broadcasted live from Garvey’s Centra in NewCastle West.

On Wednesday, the show was broadcasted live from the Irish World Academy in UL from the Croom Civic Centre on Thursday.