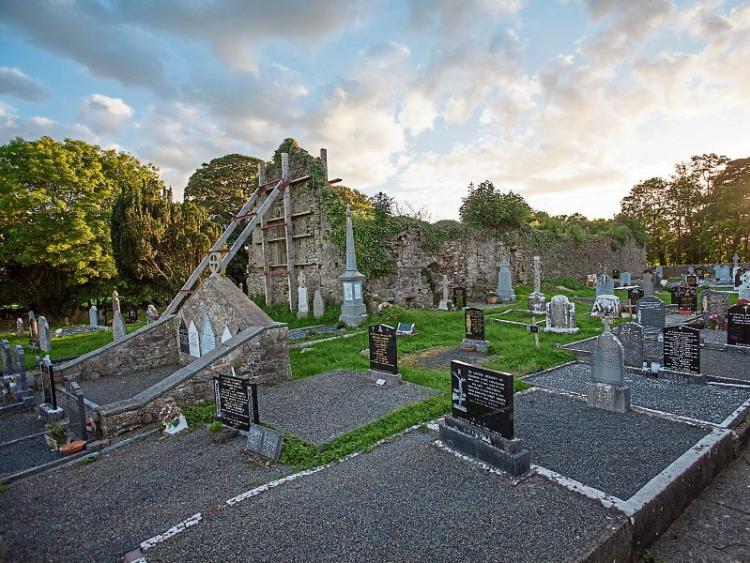 A view of the medieval church ruins at Castletown Conyers, located some miles from Rourke’s Cross

THE history of a unique medieval settlement at Castletown Conyers, is being uncovered and revealed as part of a concerted local effort  to preserve the remains of the building known locally as the Abbey.

But this Abbey was, in fact, the parish church which , along with a motte and a castle or manor house, formed the centre of a medieval borough of up to 300 people which dates back to the 13th century.

According to archaelogist Sarah McCutcheon who has carried out some investigations into the site, Castletown in the parish of Corcomhide was the ancient name for the tribal area of the McEniry family.

This family remained a force in the area until the late 17th century. It was known as Baile Caisleáin Mhic an Oighre or town of MacEniry’s castle. It obtained the name Castletown Conyers many centuries later when it was subsequently purchased by Captain G. Conyers.

Castletown became the site of a medieval borough, with a church, a motte, a castle or manor house. The manor of Corkemoyd was granted by Maurice Fitzmaurice to his son-in-law Thomas de Clare and his wife Juliana, who in turn granted the church, in 1276, to the Cathedral of Limerick.

By 1284 the manor was holding a weekly market but in 1302 it was destroyed by war. However, an  inquisition of 1321 suggested that an estimated 290 people were living there.

There are a number of references to the castle during the 14th century, when it was held by the de Cliffords, amongst others. The church was rededicated in 1410 to the Purification of the Blessed Virgin Mary.

After the Reformation it would have been vested in the Church of Ireland and there are some 16th century alterations to the church. The Conyers Vault in the west end was inserted in the late 18th or early 19th century and it's likely the church was a ruin at this point. It was certainly a ruin by the time of the first Ordnance Survey in the 1830s and 1840s.

Now, through the combined efforts of the Castletown Conyers Development Association and Limerick City and County Council, work has begun on preserving the church ruins.

When the matter was first raised with councillors in March last year, the association’s chairman Denis Cagney explained that trees were  growing within the walls and in the walls and more recently  a number of large stones had fallen from a height.

“The roots of trees and ivy might be the only thing holding it together,” Mr Cagney said at the time. ”It would be a huge project to take on but we will have to do something about it.”

At that meeting, Ms McCutcheon explained that the work required to stabilise the building would need to be done in several phases.

Because the trees had taken over so badly, she said, the first phase would involve cutting back the trees and then drilling and treating the boles and roots. Some propping and boarding off would also be necessary in this phase, she said. She estimated it would cost about €125,000 to stabilise the building.

Later phases, she explained, would involved repairing the cavities left by the roots, removing other vegetation, consolidating the south east corner and north wall chancel and capping the walls.

Since then, work on clearing the trees and ivy has been undertaken under the direction of Ms McCutcheon and the north wall has been propped up.

And this month, councillors were told that the council had received two grants to begin the next phase.

A grant from the Heritage Council will allow a LiDAR or three-dimensional scan of the building to be undertaken along with a photographic survey. And money from the Structures at Risk fund of the Department of Arts, Heritage, Regional, Rural and Gaeltacht Affairs, will  be used to carry out consolidation works on a 14-metre section of the North Wall.

The council also intends to apply for further funding next year for the next phase in the project.