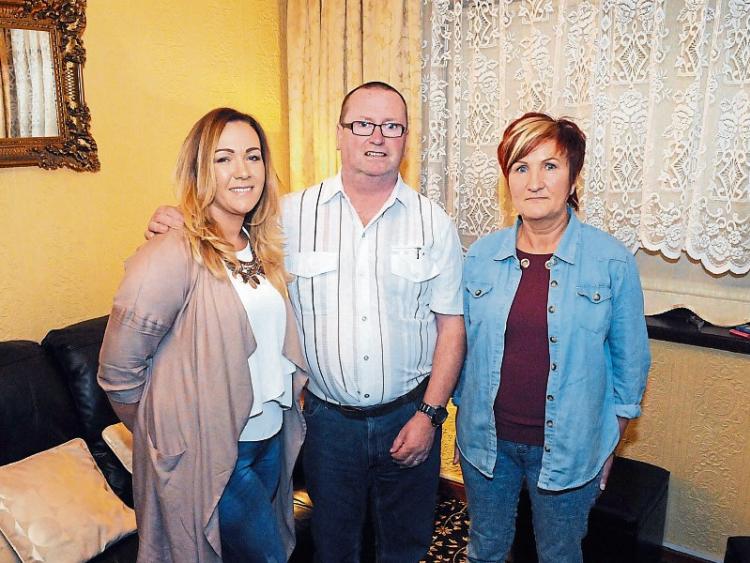 Shane's parents and sister Jessica, Tommy and Sandra Doyle, are raising money to help get him a kidney transfer

A LIMERICK man stranded thousands of miles from home with a life-threatening condition is praying for a kidney donation from his mother or sister.

Shane Doyle, 32, moved from his home in the Hyde Road to Victoria in Melbourne, Australia three-and-a-half years ago after losing his job in the city.

But the last two years have been ruined after he was diagnosed with nephritis – an inflammation of the kidneys – and renal failure.

As a result of this, his health has deteriorated, his weight plunged, and he needs a kidney transplant. Shane is unable to travel home to receive the donation from his only sister Jessica, or mother Sandra.

“He spends more time in hospital than he does at home. His night-time dialysis goes on for ten hours, and the day dialysis takes place five days our of seven, and goes on for six hours at a time. After that, he is wrecked,” Shane’s father Tommy said.

Shane’s family and friends in Limerick are rallying around the construction worker, with his mum and sister both waiting to find out if they will match up.

The pair had blood tests at the University Hospital Limerick to determine their eligibility, with tissue tests done in Beaumont Hospital this week sent to Shane’s specialist in Australia who will make the final decision.

“We hope to know within three weeks,” Jessica said, “But we have been told there is a 70-30 chance of me being a match, while my mother would be 50-50. And we are both healthy people, thank God.”

In order to help fund their travel down under, a GoFundMe page has been set up online, and had raised €4,710 by this Wednesday.

The money raised will also help pay for a stay of at least six weeks, plus the loss of earnings, and childcare costs for Jessica’s two children.

The family admit they are in “shock and awe” at the offers of help already made from Limerick people, with Jessica saying: “We did not plan to do any of this. My mother had planned to get a loan from the credit union. We are quite emotional at the kindness of Limerick people,” she added.

It was Shane’s cousin Dawn O’Mahony who initially broached the idea of fundraising. Jessica is not concerned about the impact a potential kidney transplant may have on her own health – all she is focused on is helping her older brother.

“I didn’t stop for a minute to think about it. It was just ‘yes’. Of course I am going to help him out. I am not worried about the costs. All that is important here is my brother gets better,” she said.

Sandra says even if Shane was able to travel, she fears he would not be allowed back into Australia, as his visa has expired. His health has meant his application to renew has been left ‘in limbo’.

“Australia is their home now. There is nothing for Shane to come home to here. He and Cathy [his girlfriend] want to start a family there,” she explained.

Shane met Sligo girl Cathy when he first arrived in Australia. In order to help with the costs of his treatment, she works “all the hours God sends” in her job in advertising. “Cathy has to work all week, so he is on his own in the hospital. We are trying to get him to ask his consultant various questions on his condition. He says he will, but he is so sick and tired, so you cannot give out to him for not asking the question,” Sandra explains.

His father Tommy – who has asked everyone to carry a donor card – says as his health has deteriorated the family cannot see Shane and speak to him as much.

“It is his hugs and contact we miss the most. It is never the same on the phone,” Sandra adds.

“I would have been completely against going public on this and having my picture taken. But other people said to me: do you want to be in the cemetery next year when I could have gone on the Limerick Leader and put this appeal out to save him. We are not the type of people to take funds for nothing,” his mother concluded.