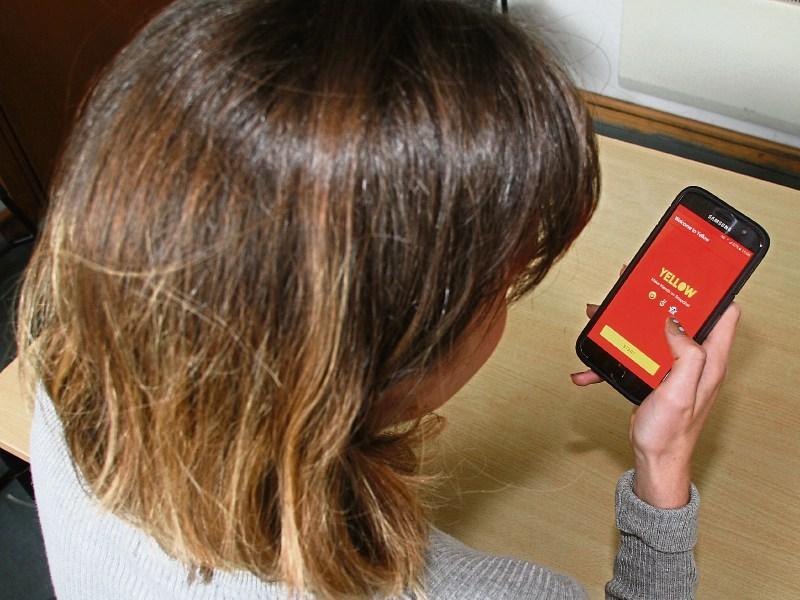 A NEW dating app which is being used by teenagers to send nude photographs has been described as “extremely worrying”.

The app, called Yellow, is gaining popularity in a number of Limerick schools, and has been met with criticism by a parents’ association.

The digital flirting app has been dubbed ‘Tinder for Teenagers’, as it encourages users to choose who to chat to based on photographs.

A junior certificate student in a county Limerick school revealed that the app is being used by students to flirt with others from around the country and even further afield.

“People would send nudes and underwear pictures, boys and girls both - it’s mostly used to text and get pictures from each other,” she said.

The app works by connecting to a Snapchat account, helping users to find new people with whom to chat and share pictures. Like the popular dating app Tinder, users are required to swipe right or left to like or dislike a profile, and when two users like each other, they are matched. In Yellow, a match is automatically added as a contact on Snapchat.

Contacted by the Leader to offer a general comment on this online trend, chairperson of the Parents’ Association at Salesian Secondary College Pallaskenry, Catherine Fitzgerald, said that the way these apps are being used is “extremely worrying”, adding that she hadn’t heard of this particular app.

She said that it was important for parents to be aware of the apps their children are using, although that can be difficult.

“Snapchat is a very hard one for parents to monitor, because the pictures more or less delete themselves. Then again, it says it’ll delete them after a couple of seconds, but that’s not always what happens — if they’re quick enough, they’ll screenshot it.”

Ms Fitzgerald highlighted a potential danger that these pictures would then “spread around to each other via Snapchat, Facebook or any of the others”.

Principal of Gaelcholaiste Luimnigh, Donncha O Treasaigh, said that “parental awareness” is the most important factor.

“In recent years, we have encouraged parents to help each other and to discuss more openly what good and responsible use of technology looks like,” he said.

“To try and remove or restrict young people from social media is unlikely to help them learn how to navigate the social media world they live in. Schools and parents need to use every opportunity to help young people make sense of the technology, it's benefits and also its potential to be harmful.”

Mr O Treasaigh said that trusting and educating young people is “the only way”.

“Our young people need to understand how apps and social media can be both good and bad, and that every young person is responsible for what they say and do on social media.”

It is essential that “everyone from schools, to parents, to media, and young people themselves, highlight and discuss any app that has the potential to be used in an inappropriate way”, he added.

The student source said that she was aware of her own responsibility to stay safe online. She said: “I would definitely be wary, I double check everything I send.

“If things go wrong, then you can easily just delete or block with a click of a button,” she added.

A Garda source said that because this is a new phenomenon, there are no clear guidelines established in the area of this particular app.

“Our advice would be for people not to share any personal information with strangers online.”