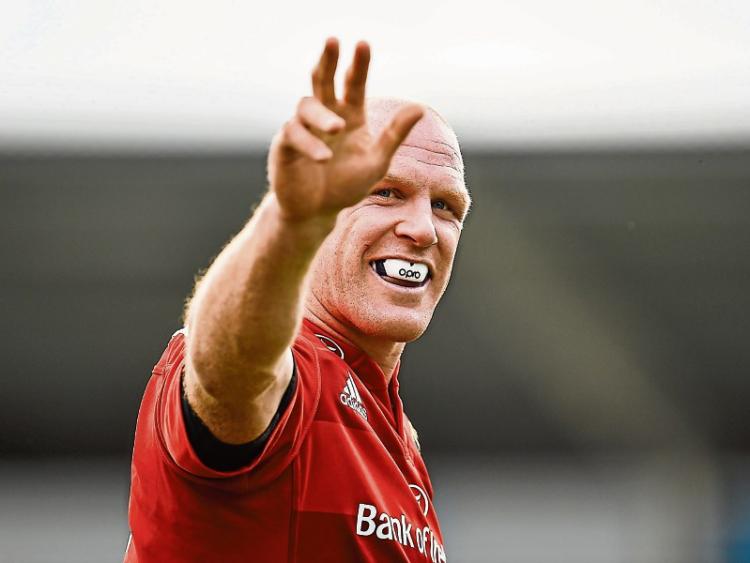 SEVEN months after announcing his retirement from rugby, former Munster, Ireland and Lions captain Paul O’Connell says the end of his playing career feels like 10 years ago “as so much has happened in between”.

The rugby colossus who confirmed his retirement in February due to a hamstring injury sustained in the World Cup last autumn says he was “ready to retire” having been fortunate enough to play at the top level of the sport until the age of 35.

He was in Screggan, Co Offaly to promote the Aldi Play Rugby initiative which provides equipment, tools and a training course in schools across the country.

“I loved what I did but, at the same time, I’ve really, really enjoyed retirement. I think when you are older and you’re ready for it, it’s a lot easier to deal with it.”

When asked if he was missing playing the game, the rugby legend responded: “I’m not really, not at the moment anyway. I’m busy and, as I said, I was ready to retire. I was 35 years of age. Some young guys have to retire a lot earlier than me.”

Speaking about his career-ending injury Paul said he knew he wasn’t going to get back at the level he was at before “and that was the tough thing for me but that’s life.

“I was lucky enough to play for 15 years as a professional player, lived in the town I grew up in - not many Irish players do that. To be a professional player you have to go abroad so rugby gave me that opportunity and I’m very grateful. We don’t all get the fairytale ending. I went out giving it my best and doing the best I could and that’s all you can ever do, I think.”

The proud Limerickman recalled his first memory of playing rugby with his club Young Munster.

In July, Paul joined the Greencore Munster Rugby Academy in an advisory role. He described the role as “really enjoyable”.

The 36-year-old is also back playing “a little bit of golf”.

“I am enjoying it and I am enjoying having weekends to myself. All of our weekends revolved around the match at the weekend and around whether we lost or won the match which is really important to the happiness of the weekend so I’m enjoying not having that up and down and being able to enjoy watching rugby and GAA and going to the kids’ training and all of that.”

Much of his time immediately following the announcement of his retirement was spent working on his autobiography which will be available from October 6. The book, entitled The Battle, has been ghost-written by Alan English, the former editor of the Limerick Leader and recently appointed editorial director of Iconic Newspapers.

Paul has described The Battle, published by Penguin Ireland, as “the full story”.

“I think it’s very honest and I hope people will enjoy it,” he said.

Coinciding with the release of the book, Paul will be on the Late Late Show on Friday, October 7 and will be signing copies of the book in O’Mahony’s bookshop in the city on Sunday, October 9 at 2pm.