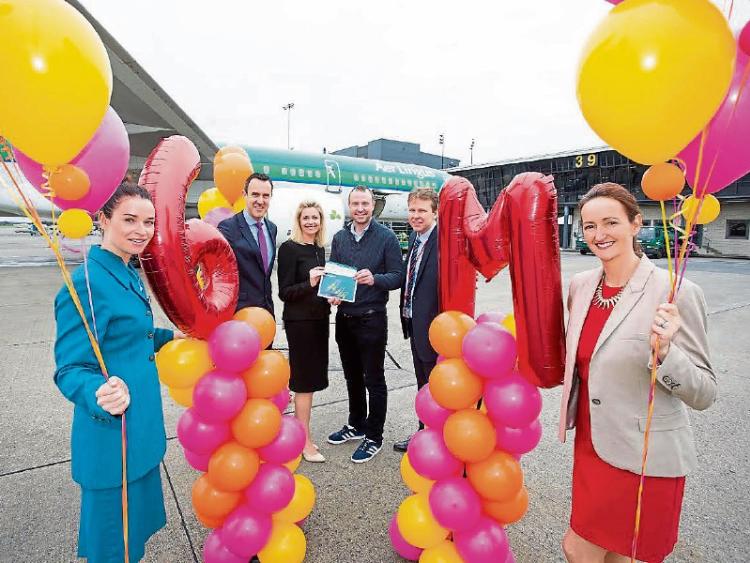 Staff at Shannon airport pictured with Emmet Keary, the six millionth passenger to pass through the airport since January 1, 2013 - Picture: Arthur Ellis

SHANNON airport had six million reasons to celebrate its independence day as the six millionth passenger to use the airport passed through.

Galway passenger Emmet Keary was awarded a pair of Aer Lingus flights to New York for being the six millionth passenger to use the airport since it became an independent airport operation on January 1, 2013.

Surprised and delighted with the generous prize he received from the airport, Mr Keary said:

“I never win anything so it was a lovely surprise.  I am going to give the tickets to my parents Mike and Anne who are living in Loughrea. They will be thrilled!”

He is a regular traveller through Shannon airport and described it as “the best airport in the world to get through”.

Acknowledging the support that the airport has received to reach the 6 million passenger mark, Shannon Group CEO Matthew Thomas said:

“Today’s celebration was made possible by a combination of efforts, the dedication and determination of our airport team working with our airline partners to deliver 35 destinations in 11 countries, combined with the support of our loyal airport communities along the western seaboard and internationally who have chosen to fly Shannon.”

He then thanked all of the airport’s stakeholders for their “continued support” and added that the airport is “committed to delivering more reasons for customers to choose Shannon”.