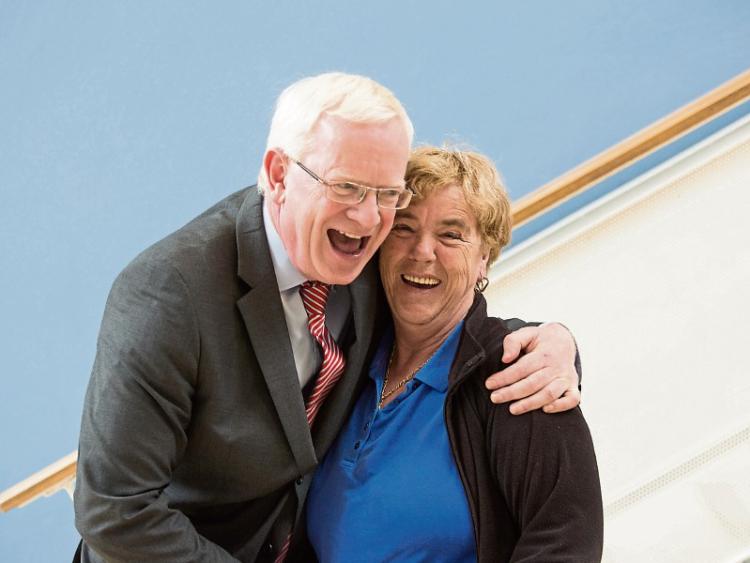 Christina Keogh, who works at LIT, gives the new president Dr Vincent Cunnane a warm welcome to his new job

THE new president of LIT, Dr Vincent Cunnane, says that despite planning objections he is confident the “fantastic project” involving a move to Coonagh Cross will go ahead.

A plan to move engineering students to an out of use site at Coonagh Cross – an area once earmarked for a cinema – has been delayed by 12 months, after running into planning difficultues.

But the college’s leader insisted progress on the site will have moved on significantly by this time next year.

“We will have something in Coonagh by September 2017. It is a fantastic project, as it is multi-dimensional. Not only are we going to take over something that is not fit for purpose, and turn it into something that is, we will open up more engineering opportunities. But think about what the [Northern Distributor Road] is going do,” gesturing enthusiastically, “Here we have Coonagh and Moyross. And we are going to unify them through this road, and open Moyross too.”

He defended the college against delays to the project, with the council requesting significant further information on a number of issues.

Although he hails from Stranorlar in far-north Donegal, when he received the call to leave his job in IT Sligo and replace Dr Maria Hinfelaar as LIT’s leader, it just seemed right.

“Aagh, you know, a multitude of things brought me back. Both as a professional and as a family, we have been here since 1990. The vast majority of my professional career has been in this region. While IT Sligo is a great institution, and I was delighted to get that position, and what we achieved, I was on the road quite a lot,” he says.

Dr Cunnane left Limerick as recently as 2013 and moved northwards to become president at IT Sligo, following the winding down of Shannon Development.

But his wife Helene and three adult sons, Eoghan, Connor and Ciaran remained in the family home in Blackwater, and he was back home most weekends.

Even in the short time he has not worked in Limerick though, the new LIT president noticed an improvement in infrastructure locally.

“The infrastructure in Limerick now is on a par with lots of other places. Obviously, the road to Cork remains a major problem, and it needs to be addressed, and the west will not prosper until this happens,” he says.

“But the advent of the motorway from Limerick to Tuam is fantastic for Limerick, the road to Dublin and the rail system, plus the airport, and the ports. This is becoming an infrastructure-rich part of the country,” he said.

In terms of development, Dr Cunnane joins LIT at an exciting time, with the northside college’s future very much at a tipping point.

Meanwhile, back in the city, Dr Cunnane said he is looking forward to LIT being part of a new “artistic quarter” around its campus on Locke Quay, and around the Patrick Street site.

He reaffirmed the college’s commitment to developing a third level campus on Patrick Street, but also urged patience from Limerick’s public.

“The idea this was all going to be done in a short timeline…. It’s going to take years in order to achieve these ambitious goals. But the first thing is to have a vision. And we have that,” he added.

The first time Dr Cunnane came to Limerick in 1990, his then employer was on the brink of big things, the University of Limerick having only been established the year previous.

Before this, he worked in Galway, Southampton and Gweedore in his native Donegal.

And Dr Cunnane turned down a posting in Liverpool to be part of a new educational frontier in the Treaty City.

“It was a very exciting time. I think I was one of the first appointments, post its designation as a university. It was a really dynamic place, and this is what attracted me,” he explains.

“The opportunity to be part of a growing story appealed to me. And I have never regretted that decision.”

From there, he spent 20 years rising through the ranks of UL until 2002, when the former college president, Roger Downer created the position of vice-president, research, a position he held until 2008 when he moved Shannon Development.

As our interview comes to a close, Dr Cunnane recalls the advice he had just given to LIT’s new intake of students.

“We don’t care if we were your first choice, or tenth choice. Take advantage of this incredible opportunity you have been afforded.”

It appears the new LIT president is going to practice as he preaches.