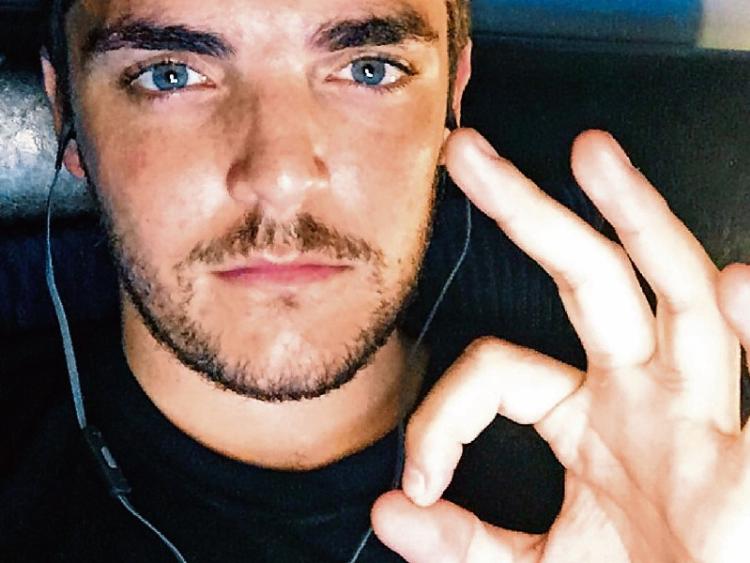 FROM THE outside Owen Webb O’Rourke has it all - intelligence, good looks, sporting talent, a loving family and girlfriend. But that’s the problem with looking from the outside - you can’t see the inside.

Owen has joined the It’s OK not to feel OK campaign by sharing his story. In a moving blog post the Kilmallock man bares his soul, with the goal of encouraging others to talk about their problems and seek help if needed.

The 24-year-old writes with complete honesty about twice being “at peace” with the decision to take his own life.

“Luckily I was saved from making the regret that I would never have to live with. I got a second and even a third chance from making the most selfish decision of my life,” said Owen.

The young man who hurled in goals with Limerick minors, U21s and has three county medals with Kilmallock started writing at 4.11am one morning last week. A lyric that struck a chord with Owen is Dreams by rapper, The Game - “They say sleep is the cousin of death, so my eyes wide open, ‘cause a dream is kin to your last breath”.

He asked himself what is he doing awake at that ungodly hour and what has he to get up for in the morning?

“Nothing but claustrophobic worries - the same worries that I’ve had for the last three years. Worries that have changed me as a person, worries that have driven me to the edge multiple times and on two separate occasions had me give up on life.

“On both occasions I was at what I thought was peace with my decision, but it was really just fear. Luckily I was saved from making the regret that I’d never have to live with. I got a second and even a third chance from making the most selfish decision of my life. Ever since then things have only gotten slightly better. My worries have changed but still weigh on my mind just as much if not more,” he said.

What follows will resonate with many men and women in their early twenties as they are consumed by life and college pressures and try and answer the age-old question - “What am I going to do with my life?”

He dropped out of college at the start of his final semester after three and a half years.

“It was January 2014, I was at home on the last couple of weeks of Christmas holidays. My thesis was due on February 1. Not only had I no interest in doing the thesis but I genuinely had no idea what I was writing about. I was fooling myself.

“The only thing keeping me in college and slowly driving myself insane was a crippling fear of failure and the amount of money my parents had already committed to get me to this stage. All this culminated in a mental breakdown. How could I tell my family? How could I continue to fraudulently make my way through my course and when would it finally take its toll on me? Turns out I didn’t have to wait too long.

“On January 5 I completely broke down. It was so bad. With all the breakdowns I’ve had since, none will ever match the first. I physically couldn’t move. All my muscles seized -up rock solid and no matter what I tried or told myself I couldn’t move. The only thing I could do was cry. To say I was scared was an understatement. It took me hours to calm down and to regain control of my body. It was then, after discussions with my parents, that I decided to drop out of college.”

Owen couldn’t shake the feeling that he had left his mum and dad down so due to his stubborn nature returned to his studies.

“It took four more torturous weeks before I finally gave up all hope. It was during those four weeks when I tried to take my own life twice. I couldn’t show my face in public, I didn’t want to see my parents because I let them down, essentially wasting their savings in the meantime. My bed was where I spent the majority of my time and I felt like a waste of a life. There are a lot of days when I still get these feelings. Meeting my girlfriend three years ago was easily one of the greatest things that’s ever happened to me but even she couldn’t help me. I wanted to be dead. I wanted to no longer be a burden, failure or a waste of talent.”

Everything up to that point had been easy - studies, friends, hurling. Now he couldn’t face all three.

“I didn’t want to see anybody. I just wanted to melt into the ground and never exist. Ever single regret I’ve had in my life multiplied tenfold. I found myself constantly thinking ‘If only I could go back and do it right’ but I’d blown my chance.”

Owen’s dream is to be free of rules and express his creativity through art, music, video, clothes, photography or design. He is incredibly hard on himself when he says, “I’m a 24-year-old college dropout, with no experience, no prospects and no money”.

“It looks like the only way I’ll get anything from my life is by creating something myself. I’m not sure at the moment if I can do that but I’m going to try to remain hopeful despite it all.

“I know the world isn’t fair to anyone and that everyone goes through tough times. I’m not trying to make little of everyone else’s struggles or trying to get some sympathy. I just wanted to share my story because as I sit here finishing this post it feels good to have gotten this off my chest.”

A new trend on Facebook is for men to share a selfie with the OK hand symbol to raise awareness that it’s OK not to feel OK. Owen has done that and much more by telling his story.

“It’s perfectly normal to talk about your problems and to get help if it’s needed. Personally it took me until I was on the verge of doing something wrong to seek help but without a doubt it helped immensely.

“I’m not cured, to be honest I don’t think this is something that there is a cure for but after letting other people know of my problems and seeking out help from family and counsellors I feel a lot more capable to deal with my issues. I try not to let them beat me down as much and trust that everything will be OK. I don’t need to rush anything, my time will come if I keep fighting.”

Owen’s only hope from his words is that it will encourage those who can relate to his story, of whom there are so many, to talk to someone.

“Just don’t feel like you are alone,” is Owen’s concluding sentence. He stopped typing at 7.19am, a new day has dawned and he is ready to face it head on. Owen will never know how many others he will help to do the same.