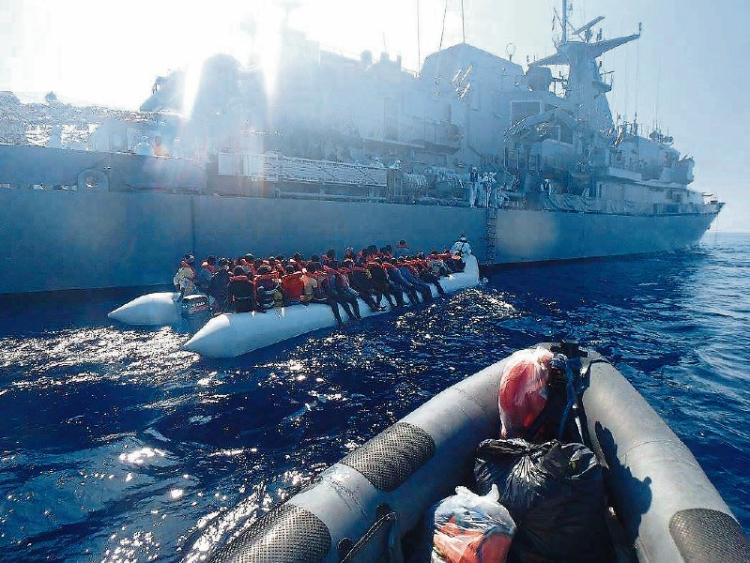 Brendan Barrett has been on board the L.E. James Joyce since July and is looking forward to coming home to his fiancee

A LIMERICKMAN is among those helping to rescue thousands of migrants making the perilous journey across the seas to Europe – but he has also had the heartbreaking job of recovering the bodies of 16 deceased migrants in one day alone.

He is currently serving on board the L.E. James Joyce, which has been on a humanitarian mission, Operation Pontus, since July 8 last.

The LÉ James Joyce has now rescued more than 3,000 people in the Mediterranean in recent months, and that figure continues to rise on nearly a daily basis.

On Sunday morning last they successfully located and rescued 108 people during a search and rescue operation conducted with the Italian Coastguard 35 miles north-west of Tripoli.

Overall last weekend they rescued 531 people, and on board they received food, water and medical treatment. Those rescued later disembark in Cagliari in Sardinia.

Speaking to the Limerick Leader, Brendan, the first in his family to join the defence forces, said the crew of 60 on board the vessel deal with many stressful situations.

“Migrants usually leave the shores of Tripoli [the capital of Libya] via wooden barges and rubber crafts. Once the migrants are rescued they can be on board our ship for periods up to three days while transiting to the nearest port of safety. We give medical attention where required, as we had many pregnant women and very young infants and children who were ill and were looked after by our crew. Unfortunately we recovered 16 deceased migrants in one day alone from one wooden barge,” he said.

On that same day, they saved 608 from the sea, he added. While recovering the remains on the deceased is particularly “tough”, he said it’s a very fulfilling job, knowing that thousands of people have been brought to safe shores.

Brendan’s duties as a leading seaman include working on deck launching, recovering MST fast sea boats, as well as the security and maintaining the welfare of the men, women and children they rescue.

“If we do not have any rescues, a general day consists of routine maintenance of the ship below decks and upper decks. This is very important as we need to have the ship ready for the next rescue operation.

Also we conduct many exerciseS which include Gunnery drill, firefighting, damage control and abandon ship.” There will be further emotional scenes in Cork in September as Brendan returns home from this mission and is reunited with his fiancee Wendy Canty,

He and the crew of the L.E James Joyce are due to return to the naval base in Haulbowline, county Cork at the end of September. After a few days’ break, he will return to sea on board the L.E Ciara on a routine fishing patrol around the coast of Ireland.