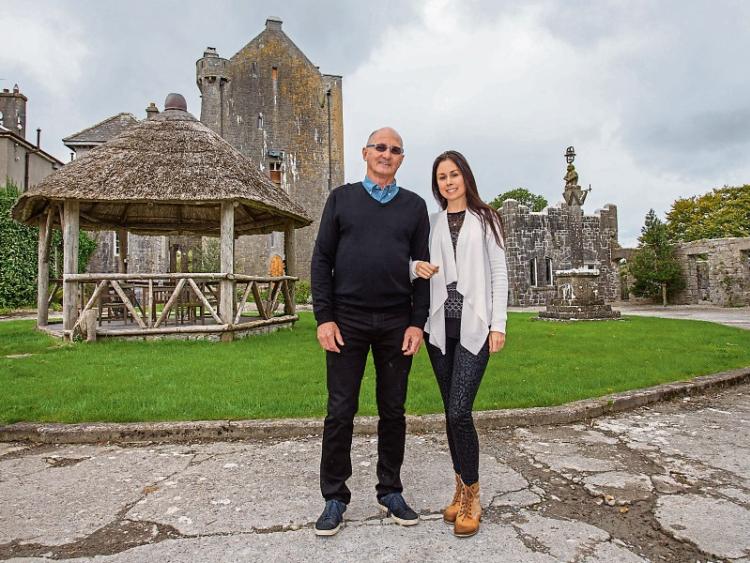 Robert Deane, Lord Muskerry with his daughter, the designer Catherine Deane, with the 15th century tower house in the background

ROBERT Deane, the current Lord Muskerry of Springfield Castle, is living out his dream and is certainly  living up to the family motto.

Nothing is difficult for those who are loyal and strong, the motto reads. And Robert Deane, though living for decades  in South Africa, has remained loyal to his ancestral home  and to his dream of restoring it.

“As a youngster growing up here, I had a dream to see the Tower and the rest of the place reasonably restored,” he told the Limerick Leader at the weekend when he was once more back in Springfield Castle. And he recalled a photograph and article which appeared in the Limerick Leader about 1976  in which he spoke, even then, about his restoration dream.

“I had this dream to do it. Then, a few years ago, I was in a position to do it, to start doing it,” he explained. “Hopefully it will allow this place to still be here whoever may be occupying it.

The restoration has involved developing the main house and the east wing of Springfield Castle into  high-end rental properties, attracting  groups and families gathering for holidays or special occasions. More recently, explained Robert Deane’s sister, Betty Sykes who runs the operation with her husband Jonathan and daughter Karen,the castle has attracted a lot of  small, intimate and bespoke weddings and already next May and June are booked out.

But it has been the restoration of the Tower, probably the oldest part of the castle, which has really fired Robert’s imagination.

The building, dating from the 1500s, has had its cruciform roof replaced and new oak floors and stairways, fashioned from timber on the estate, have been installed.

Now, in order to make it user-friendly and safe, an adjoining tower with a fire escape and disability access has to be constructed. Planning permission for this is currently being sought.

And the hope is that will be ready to be used as a characterful venue for all sorts of events some time next year.

Meanwhile, Springfield Castle has also been used as the backdrop for a fashion shoot for Catherine Deane’s 2017 bridal collection.

Catherine, who is Robert’s daughter, began her designing career with ready-to-wear collections and luxurious evening wear for celebrities such as Beyonce. But now she just loves being part of people’s special day and adores the romance of it all.  There is, she added, a lovely synchronicity between her journey as a designer and that of Springfield Castle which  more and more, is becoming established as a special wedding venue.

“The spirit behind my designs is Bohemian goddess and traveller,” she explained. “I wanted to start getting into more exotic locations and this (Springfield) was my first choice.”

“Hong Kong is home at the moment but I have an office in the UK and we have just opened an office  in New York,” she continued. “Ireland is special. I was born here. I have childhood memories of Springfield Castle and of playing with my cousins here. It is such a beautiful place.”

The history of the castle since it  was a Fitzgerald stronghold in 1280, reflects the many twists and turns of Irish history.  The great Gaelic bard of Springfield,  Daithí O’Bruadair, described it as a noble, lightsome place, a home of choirs and music,  a home of grandeur and gorgeous colours.

Some of that spirit has now once again been restored.