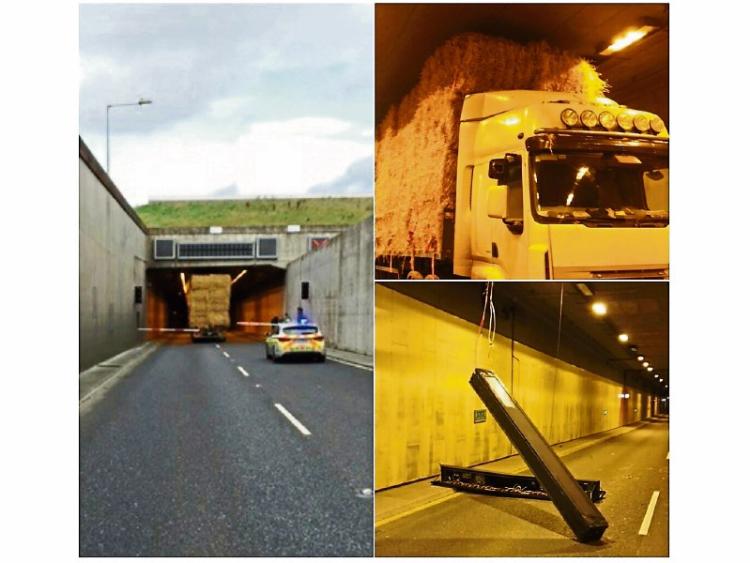 THE northbound lane of the Limerick Tunnel is likely to remain closed for a number of days following an accident earlier today.

A two-way traffic system is going to be put in place on the southbound side of the link, with speed limits reduced to 50km, as repair works take place on the opposite side.

This came after an oversized agricultural vehicle carrying hay-bales became lodged in the tunnel.

Declan Cahill, the chief executive of DirectLink which runs the facility, said the five-metre high truck entered the tunnel at 8.30am this Sunday.

The maximum height of vehicles in the tunnel is 4.65m, and – Mr Cahill claimed – the driver ignored the warnings, driving through the barrier at the entrance.

“We have had quite a substantial amount of damage to signs, lights and electronic system,” he told Live95FM news.

In a statement, DirectRoute warned motorists travelling northbound on the N18 to expect delays.

The company confirmed equipment in the tunnel damaged is being removed by specialist contractors.

“Replacement of this equipment will take a period of time. An assessment is currently being undertaken,” a spokesperson said.

Mr Cahill confirmed work to repair the tunnel’s northbound lane will take “a number of days”, with vehicles sharing the southbound road for the time being.

The company added: “DirectRoute (Limerick) Ltd apologises for any inconvenience this unavoidable disruption has caused to our customers. We will send further updates when we have more information.”

Fine Gael councillor Daniel Butler, who is based in Raheen, says traffic is “chronic” around the Mungret Cement factory roundabout.

He said traffic is even backing up onto the M7 motorway – and is concerned at the delays come Monday morning.

For more on this story, stay with www.limerickleader.ie