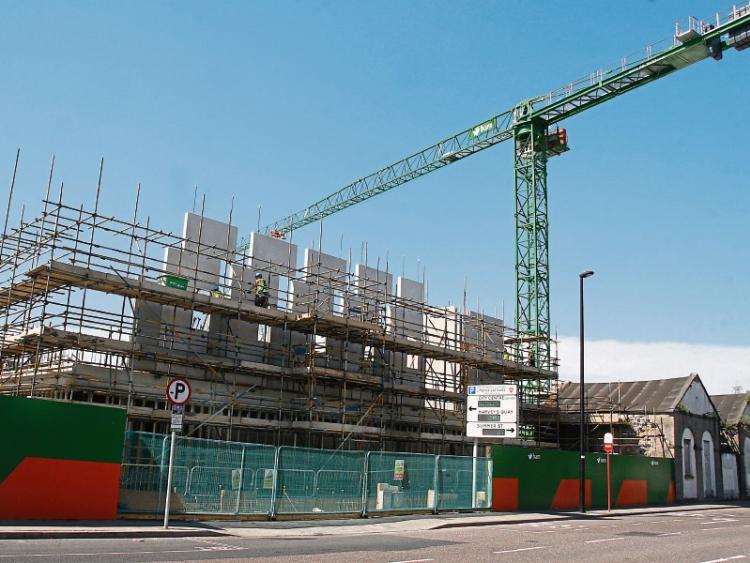 A tower-crane at the site of the new criminal courthouse on Mulgrave Street - Picture: Adrian Butler

FOR several years the only tower-cranes on the Limerick skyline were at the site of the ill-fated Parkway Valley development on the Dublin Road.

Now, the return of cranes to the syline is being hailed as a significant turning point in the development of the city.

A number of major projects are currently underway such as the new criminal courthouse on Mulgrave Street and the Northern Trust building at Ballysimon with further projects in the pipeline such as the development of the Hanging Gardens site at Henry Street, a new library at Mary Immaculate College and the Opera site.

“We kind of forgot what they looked like and when we saw them (being erected over the summer) we didn’t know what they were for a while – it was like men seeing fire for the first time,” said James Ring, chief executive of Limerick Chamber of Commerce who says the return of the cranes means two things – confidence and jobs.

Pat Daly, director of economic development with Limerick City and County Council, agrees the return of cranes will give the city a boost.

“It’s a massive vote of confidence in Limerick.  We have been working on projects that will deliver for Limerick, and the sight of cranes at various sites across Limerick shows that plans are progressing.  The Limerick 2030 economic and spatial plan is the blueprint for all future developments and plans are progressing along so that even more construction activity should be ramping up in Limerick in the coming years,” he said.​

“For so long during the recession we were hearing about green shoots but the reality was that we weren’t seeing any green shoots. Seeing these cranes back is a sign that it is not just shoots now it’s actual growth because you would be seeing this development without growth,” he said.

Conor O’Connell, regional director of the Construction Industry Federation (CIF) says that there has been dramatic change in Limerick.

“You have major projects underway and other major projects about to start so it is looking a lot more positive than it was this time two years ago – it’s been a significant change,” he said.

He added that the development works currently underway at Adare Manor Hotel and Golf Resort is the single biggest development in Munster at present.

Applications for construction-related third-level courses have increased and Mr O’Connell says he’s confident there will be enough workers to complete the various projects which are planned or already underway in Limerick.

“Certainly there is a significant focus on apprenticeships and getting skilled workers and engineers professionals into the industry.

“We would hope that the supply of labour will increase naturally over the next year or two as people return from abroad,” he said.