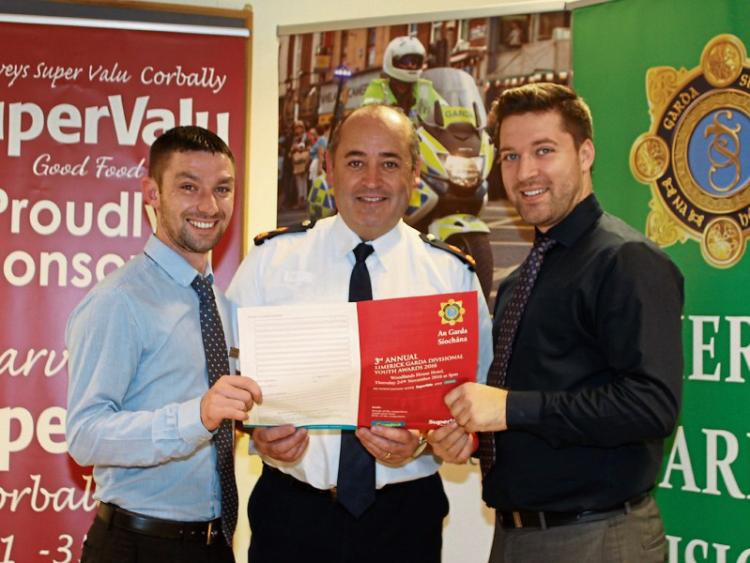 NOMINATIONS are being sought for the third annual Limerick Garda Youth Awards which take place later in the year.

The awards, which were formally launched this week by Superintendent Derek Smart at Henry Street garda station, aim to honour young people – aged between 14 and 19 - who have made a significant contribution to the community in which they live.

Awards will be presented to nominees from each of the four garda districts in the division - Limerick city north (Henry Street), Limerick city south (Roxboro Road), Newcastle West and Bruff.

There will also be a special achievement award.

“Really and truly, it’s anything that they are doing in the community from helping the elderly to getting involved in Tidy Towns to being involved in a youth club – you name it and they will be eligible for an award,” explained Sergeant Seamus O’Neill of the Juvenile Liaison Office (JLO) at Mayorstone garda station.

Representatives of Limerick FC attended the launch of this year’s awards as did one of last year’s winners 18-year-old Katie Whelan – founder of the Lisa’s Light initiative which aims to reduce the rate of suicide in Limerick and promote positive health.

Fiona O’Grady, who recently took up the role as chief executive of Limerick Youth Service, says the awards are a great initiative.

“I think they are really important in terms of acknowledging young people who take on real leadership roles in our society or who volunteer or who overcome obstacles in their own life to help other young people and I suppose we really need to reward that and support those young people,” she said.

The awards, which are sponsored by Garvey’s Centra and Supervalu, will be presented at a gala event at the Woodlands House Hotel, Adare on November 24, next.

Chris O’Driscoll, manager of Garvey’s Supervalu, Corbally says the company, which owns nine stores in Limerick, Kerry, Cork and Waterford is delighted to continue its support for the awards.

“It is good to be able to give back to the community because we get so much from young people – either through employment or their shopping in store and it is good to recognise and support what they are doing in their communities,” he told the Limerick Leader.

Nomination forms can be obtained from any garda station in Limerick. Alternatively they can also be downloaded from the garda website or from the Garvey Group website.

The organisers say anybody who deals with young people can nominate someone they feel should be considered for an award once they live within the Limerick garda district.

The closing date for receipt of nominations is Friday, October 28.

A panel of local judges will then draw up a shortlist ahead of the awards night.