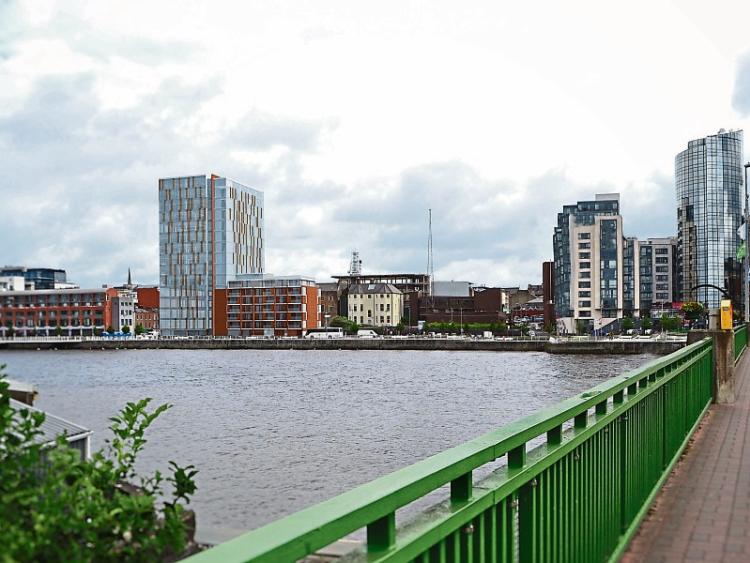 An architect’s impression on how the proposed €40m development, centre, will look from the Shannon bridge

THERE has been a broad welcome across Limerick to plans for an ambitious development on the city’s riverside.

The plans provide for 150,000 square feet of office space, plus 45 luxury apartments, and commercial space including new cafes and restaurants.

The former ESB building at Lower Cecil Street will be knocked, while 90 underground car parking spaces will be provided as part of the development.

The car park in Henry Street will be replaced with a public realm, while the high-end apartments will have at their top a roof garden, a gym pavilion, and a landscaped courtyard.

Former Education Minister Jan O’Sullivan says these plans offer “a real indication the future of Limerick City is very bright, and is really focusing on the river, and the potential of the city”.

“It has been a site ripe for development, so this is really positive news. There is a new sense of confidence that the city has a potential which has not been reached,” Ms O’Sullivan added.

Mayor of Limerick Cllr Kieran O’Hanlon added: “It is a very exciting proposal. That ESB site is in a very derelict state. I think a building like this would rejuvenate the area.

“We have been trying to bring life back to the face of the river.

“With the boardwalk, and the new House nightclub, it would really add life to the whole area.”

It is widely hoped the thousands of square feet of office space would entice a multi-national firm to invest in Limerick, with rents here up to 50% lower than the Dublin average.

Metropolitan mayor, Cllr Michael Hourigan has, however, expressed concern over where any new staff will live.

He has called for affordable accommodation to be built in the city centre.

“We need quality housing in the city, houses for people who will occupy these offices. We need to get that right here, right now,” the Fine Gael member said.

But he acknowledged the project will have a knock-on effect for city traders if it goes ahead.

“It will bring jobs into the city, which will mean the coffee shops, the retailers, the people who sell suits and the jewellers will all benefit from this,” he said.

Since the story broke , there has also been a big response to the proposals on Twitter.

James Griffin tweeted: “It’s about time something happened with the old ESB site on Bishop's Quay. A welcome development in #Limerick!”

Innovate Limerick, which supports enterprise in the city added: “Big things are happening in Limerick”.

And Paul Flannery said it is “great to see Limerick coming alive again”.