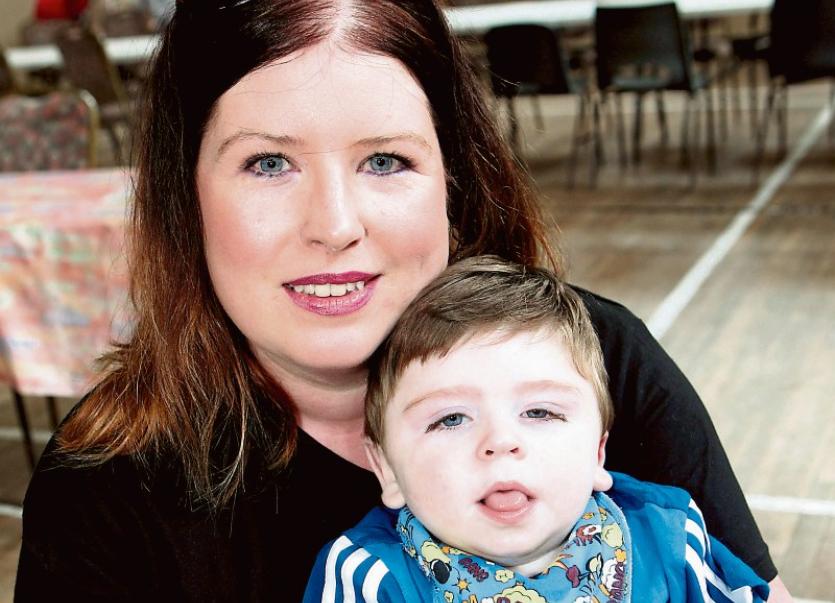 Brenda O'Connell-Barry with her son Fionn at the fundraiser

THE PARENTS of a little boy who requires 24-hour care due to a seriously debilitating and life limiting illness said they are “truly grateful” for the “astounding generosity” of the those who raised  €10,875 for his care.

Fionn Barry, just two years old, has spent most of his short life in hospital. The little boy is unable to walk, stand or even sit unaided. He cannot talk and he is visually impaired.

Trevor, Fionn’s dad lived in Bruree for many years and played sport with the parish, his wife Brenda worked in the local pre-school, Stepping Stones, until she gave birth to Fionn.

He has been diagnosed with cerebral palsy, as well as a rare type of epilepsy, and reflux.

“It is truly awful, no parent should have to do this or watch their baby go through this,” Brenda explained earlier this year.

“The only thing that kept us going was Fionn, his beautiful face, his smile, his big blue eyes and those long eyelashes. Our son.  We would do anything for this little boy and we will continue to do whatever we have to for him.

“So with all this in mind we decided to start fundraising. We want him to be as happy and comfortable as he can possibly be.  Our house is a two storey cottage and we have had to move him into a downstairs room which is really not suitable for his needs - it’s small and cramped and all his medical supplies (suctioning machine, milk pump, adapters, giving sets, stander, activity chair, physio equipment, bottles, medicines and syringes) completely take over the room.

“We feel he deserves a bedroom like any other little boy, where you see toys and colourful books when you walk in, not 10 boxes of syringes.

“He will also need many intensive therapies to help him, these will have to be sourced privately as the waiting lists for children’s services are just huge.”

There was a great show of support for Fionn and his family at a fundraising event in Bruree.

“The amount raised was €10,875 which will greatly help with his development. His parents Trevor and Brenda are truly grateful for the astounding generosity of the parish and the surrounding areas,” explained Margaret Deady, event co-ordinator.

The fundraiser began with a very successful launch day at Bruree National School with Enda Bolger, Nina Carberry and the late JT McNamara supporting Fionn and his family. The organising committee sincerely thank them for that support.

Thanks have been expressed to the school principal Jimmy Woulfe and the school staff for allowing the students to take part in the launch. The committee are also appreciative of all the support they received from organisations and businesses donating prizes and sponsorship and for all those who gave up their time to help out on the day. Thanks have also been expressed to all who sold raffle cards.

“It is impossible to thank everyone individually but a massive well done to all who helped.” said Margaret.