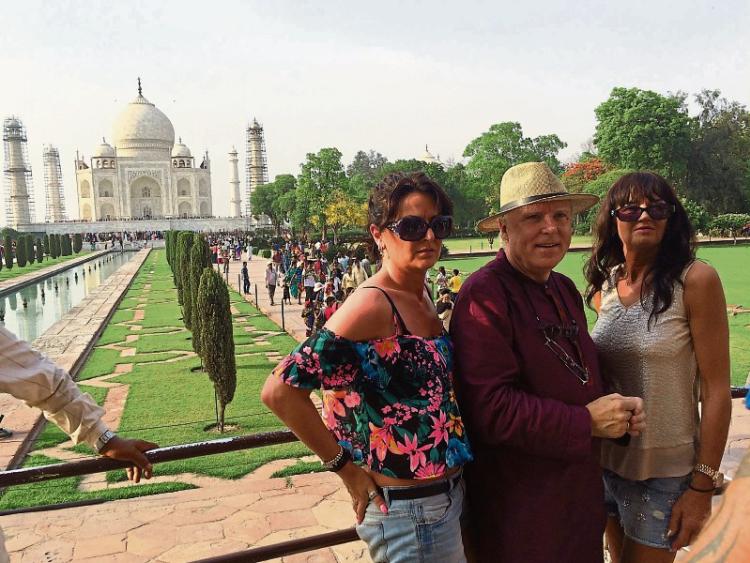 THEY survived on water, Rice Krispies, bananas and beer!

Sisters Jo and Noreen Coughlan from Bruree are two of 12 tourists who, for the past six weeks, have been regulars in living rooms across the country as part of Francis Brennan's Grand Indian Tour on RTÉ One.

It had been 17 years since the sisters’ last “wild” holiday together.

“We just felt we needed a break,” Jo, the younger of the sisters, told the Leader this week.

While Jo, the more outgoing of the pair – she is also a huge fan of Francis Brennan - was well up for the trip, Noreen was a little more cautious. Her biggest fear was the thought of cameras capturing her every more.

The sisters initially did a screen test in the Savoy hotel in Limerick and were told that “RTE would decide if they liked us on camera.”

Clearly they did. A camera crew was sent down to film the pair going about their daily work in Bruree and Charleville.

Jo is a hairdresser who works part-time at Focus Hair Design on Main Street, Charleville. She also works on her father Sean’s farm at the family home at Garryfine, Bruree. Jo lives next door to the farm.

Noreen meanwhile, is a carer for their mother Mary Coughlan. “When they came out filming us we went to my house and they presented us with the golden tickets to tell us that we got it,” Jo recalled this week.

The sisters were told to be in Dublin Airport at five o’clock on Thursday, May 12 to meet the 10 other travelling tourists.

Jo was open to going anywhere – except India!

“It was the last place on earth I wanted to go. It just never appealed to me. “We got three injections for malaria and all that so I was hoping for South Africa or Thailand. I was shocked when I heard India. Noreen knew, everyone knew because I had said ‘I’m not going if it’s India’. Anyway it was too late at that stage, we had to go.”

Francis had planned a 1,000km round trip of India's Golden Triangle - beginning in the capital city Delhi, then onto Agra, home of the majestic Taj Mahal. From there the group would travel onto the Pink City of Jaipur, followed by a tiger safari in Ranthambore National Park.

With temperatures hitting a record-breaking 51 degrees, the heat was on!

“You couldn’t breath – you actually could not breath.

“We flew to Abu Dhabi and onto New Delhi. New Delhi was just a crazy spot – mad. There are 17.5 million living there and I’d say we met every one of them,” continued Jo.

“They would bombard you.”

The natives were fascinated by the visitors, particularly the colour of their skin.

At the airport in Dublin the group were given yellow bags with an image of Francis Brennan’s head on them and were told to bring them everywhere with them so the group wouldn’t get split up.

On the plus side, the hotels, Jo said, “were fabulous”.

However, Jo “didn’t eat a bite”

“I survived on water, bananas and beer and that’s the truth. The first morning we were in a fabulous hotel, just divine, and they had hundreds of different types of bread. Anyway, I ordered a croissant and jam and I said that would be fine. The next thing the chef came out with his lovely uniform, snow white, but then I saw his fingernails. Oh my God, the dirt. I said, ‘ah Jesus, he is inside handling the bread’. That was the end of it.

“We were starving, just starving the whole lot us.”

During the trip the busload of Irish tourists had two Indian guides.

“They thought we were making films, that we were film stars. One of them thought he would get everything in but there were too many forts,” said Jo.

One thing the “film stars” weren’t prepared for was the condition of the Indian toilets.

“You had flip-flops on and you were standing on it so I said just forget it. A few of them had to go but they just couldn’t go when they went in because the toilet is just a hole in the ground and they are overflowing. You could smell it from the bus so I said forget it, I’m not even going.”

Still struggling with the presence of the cameras but trying to suck it up, Noreen who lived on Rice Krispies, would ring her husband David Howe to get things off her chest.

“It was the camera; they were there every minute of the day. I didn’t want to come across as if I was scowling. I grinned and beared it.”

Despite all the challenges, Jo described the experience as “the trip of a lifetime really. “We all got on great, we really did. They really got it right in terms of the dynamic of the thing.”

She said that landing back in Ireland and getting home to her husband Clifford Biggane and their two Bernese Mountain dogs, George and Ruben was “paradise, heaven even”.