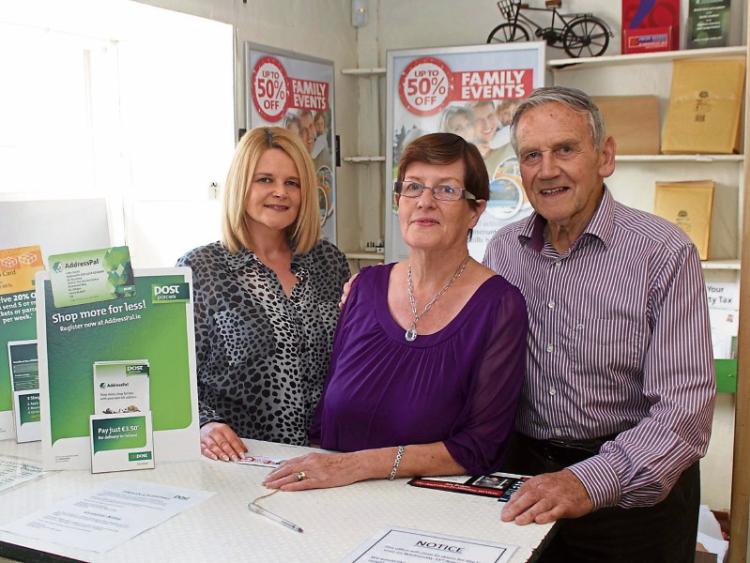 Margaret Downes at her post office with her daughter Audrey and husband John Picture: Michael Cowhey

WHEN Margaret Downes retires as post mistress in Pallaskenry next Wednesday, she will be bringing to an end a continuous family link that goes back more than two centuries.

The connection goes back to 1811 when James McNamara first opened a shop and post office on the main street of Pallaskenry. It was later taken over by his wife Joanna and then, following her death, by her daughter Mary-Ann whose husband taught in the local school for 30 years.

After Mary-Ann died 1949, the post office was taken over by her daughter, Josephine, who married Frank Downes. Daughter Rosaleen, better known as Oleen, later took it over and ran it until the mid-1990s when Margaret – her brother’s wife –  took it over. In recent years, Margaret has been assisted by her daughter Audrey.

“The post office was up the village further and the name McNamara was over the door there for years. Oleen sold it before she died and we came down here then,” Margaret’s husband, John recalled this week.

In her 20 years running the post office, Margaret has seen many changes, from increased computerisation and automation to the decline in letters due to the growth of email.

Despite all the changes, the post office has retained its importance at the centre of the community, with the role of postmistress combining elements of counsellor, therapist, technical assistant, even priest.

“We’d nearly get the confession,” she said. “And you have to listen. That’s the one thing - you have to have patience.”

For many of her customers, it was the little extra services that Margaret provided that made all the difference, whether it was helping them top up their phone credit or filling out postal orders for them when they forgot their glasses.

For John, the end of such a long family connection to the post office brings with it a degree of wistfulness. “I was living with this from day one,” he said.

He recalled the time when the manual telephone exchange was located in the house. As a young lad, it was his job to operate it at night when everyone else was in bed.

“I used to have a big bell up to my ear just to the side of the bed that would rouse me [if a call came in],” he said.

He was glad when the automatic exchanges came in - finally, it meant he could look forward to an uninterrupted night’s sleep!

Now that she is retiring, Margaret is looking forward to having time to herself to enjoy her regular walks or maybe do some touring around Ireland. However, foreign travel is not high on her list of priorities: “I went on foreign holiday and I thought I’d never get home, to be honest. I was like a fish out of water.”

“I’m just looking forward to getting up in the morning and doing my own thing and going for my walk. I just think it’s time to go and that’s it. I’ve done my stint and I can’t do any more,” she added.

The new post office, under post master Tony Hannon, is set to open on September 1, just down the road. After some uncertainty over the future of the services in the village when she decided to retire, Margaret is glad that there is a successor to take up her mantle.

“I personally would be lost if I hadn’t the post office - for bills, for the different things you’d be in a post office for.”