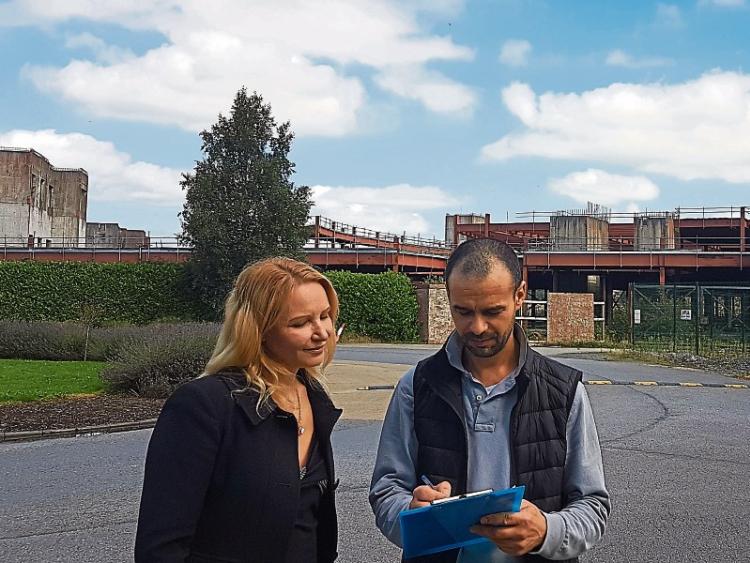 Labour councillor Elena Secas, pictured collecting a signature in the shadow of the Parkway Valley site

LIMERICK councillor Elena Secas has launched a survey asking local residents what they want to see done with the Parkway Valley site.

The Labour member has begun going door to door at homes in the area around the disused site at the Dublin Road – also known as the Horizon Mall – collecting public opinion.

Her action comes against the backdrop of the new owners of the site, Capital Assets seeking an extension on the site’s plan for retail.

But it is understood the firm is remaining open minded as to the future of the site, and it may not be used for this purpose.

Now, Cllr Secas says Capital Assets must focus on what is needed “to ensure their investment in the site will benefit the area and Limerick as a whole.”

She added: “I strongly believe that the general public, people living in the area, should be consulted on what they would like to see the Parkway Valley site developed into.”

Over the next two weeks, the City East councillor will continue to get feedback, before publishing the results of the survey.

“I think it will be paramount for the parties involved in the decision-making process to consider all development issues that have occurred in relation to that site and the feedback received from people. It will also be very important to focus on a quality and sustainable development of the site for the area and most importantly for the betterment of the city as a whole”, Cllr Secas concluded.