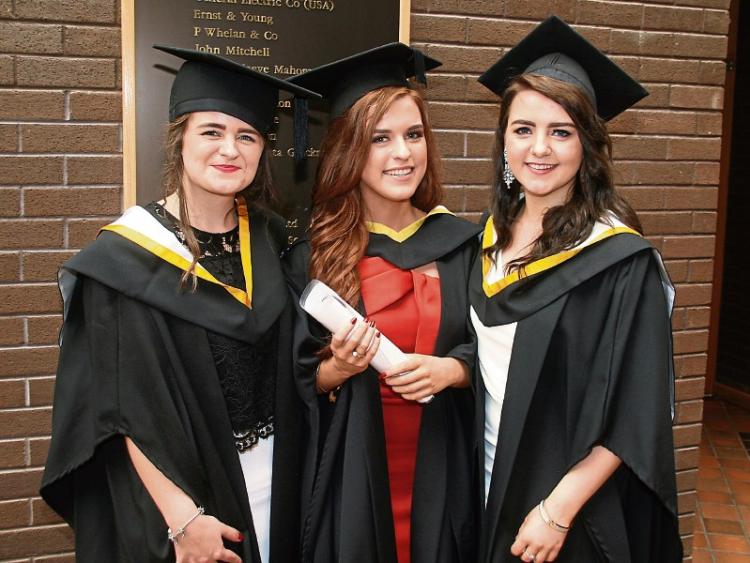 MORE than 600 young men and women graduated from the University of Limerick yesterday during the first day of the annual autumn conferrings.

By the end of the week, a total of 2,528 students will have graduated while 50 PhDs will also be awarded.

Many of those who received degrees yesterday plan to continue their studies while others are hoping to secure a job in their chosen field.

Mayor Kieran O’Hanlon, who attended the first of the conferring ceremonies, says he hopes all of the graduates will go on to achieve their potential.

“I want to congratulate everybody who will graduate this week, it’s a wonderful occasion for themselves and their families who are very proud of them,” he said.

Tessa Harper Kingston, 22, who received a BA in Psychology & Sociology is hoping to put her degree to practical use at the UL Adventure Centre Killalloe where she works as an outdoor instructor.

“I want to mix psychology with the outdoors and to do adventure therapy and things lke that,” said Tessa who added that she hopes to study for a masters in psychology sometime in the future.

Another successful graduate, Gillian O’Rourke says she is hoping to pursue a career law having received her degree in Law and Accounting.

“I feel great, it’s a relief, it’s lovely, it’s a good feeling,” she said as she proudly showed off her scroll.

The 22-year-old, who hails from Ballyclough, said she is looking to the future and her first Law Society Exams in October.

“I’m definitely looking forward to the future but I will miss it (UL) it was a great for years but it flew,” she told the Limerick Leader.

Mark Bourke from Raheen who received a second-class honours degree in Psychology & Sociology said he had bittersweet emotions when he finished his studies earlier in the year.

“It’s a big milestone. Four years ago I never thought that it would come to an end like this but I’m happy that I have this achievement in my career path,” he said.

Mark, who says he’s very familiar with the 304 city bus route revealed he is due to begin MA in Psychology at UL early next month.

Olympian Thomas Barr is due to receive a Msc in sports Performance on Friday while the first cohort of students to receive a Bachelor of Science In Paramedic Studies from UL will graduate on Thursday.