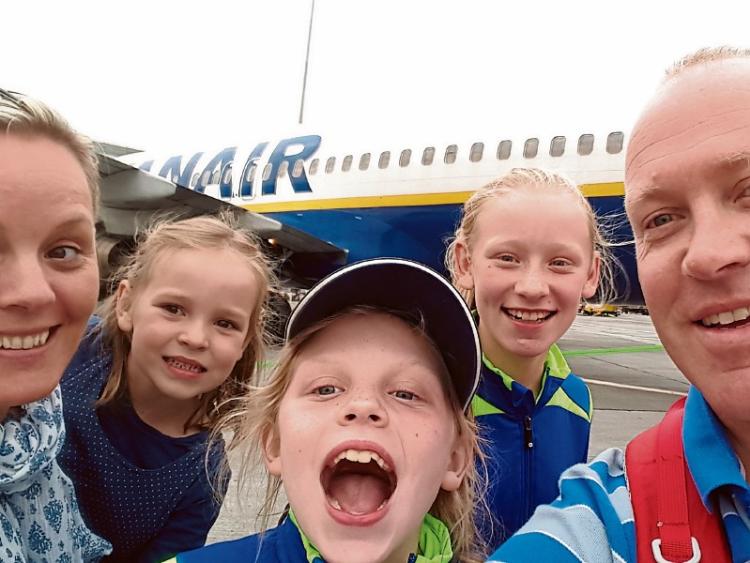 IT’S NOT only athletes in Rio de Janeiro that are wearing Irish singlets with pride as a county Limerick girl has brought home two gold medals from the British Transplant Games in Liverpool.

Tara Madigan, Castleconnell, climbed to the top of the podium in the u11s 3km run and long jump despite being just nine years of age. She had her life saving liver transplant four and half years ago in King’s Hospital, London.

Tara’s great grandfather was the legendary Mick Mackey so her sporting prowess should come as no surprise.

Tara’s dad, Sean said there was a nice coincidence in the 50 metre dash.

“Also in the final was Isabel Goggin from Cork who had a kidney transplant. We made a connection straight away as Isabel's dad, from Glen Rovers GAA -  the home of Christy Ring -  knew exactly who Tara’s great granddad was, the great Mick Mackey, probably the greatest hurler of all time,” said Sean. Isabel took silver while Tara just missed out on a bronze in a very tight finish. She has vowed to get into the medals next year as she has two more years at u11.

Tara was cheered on in Liverpool by mum and dad, Anne and Sean and siblings Érin and Éle. When they returned home to Castleconnell at 2am they were greeted with a banner and balloons pinned to their gate by Tara’s grandmother and grandfather.

While winning two gold medals is an added bonus, Sean says the real delight for Tara was being able to compete thanks to her donor and seeing others compete.

“Tara is doing well and we're always thankful to her donor and family for the fabulous gift they gave to Tara. And when we see her and others going and winning medals it's great.

“But, the stand-out memory, other than Tara winning, was the unbelievable support that the competitors got. Last place got as much if not more support and encouragement than those at the other end of the field,” said Sean.

Transplant Team Ireland is managed by Colin White, who works for the Irish Kidney Association, and Sean encourages everyone in a similar position to get involved.

Watching their daughter run and jump with abandon is a far cry from four years ago for Sean and Anne. When Tara was five a check-up showed that she had a complicated blood flow around her liver and she was placed on the transplant list.

When one became available she was flown from Baldonnel to Heathrow for the operation in London. They couldn’t have imagined back then that in four years time they would be back in the UK to watch their daughter compete. Sean says it stresses the importance of having an organ donor card.