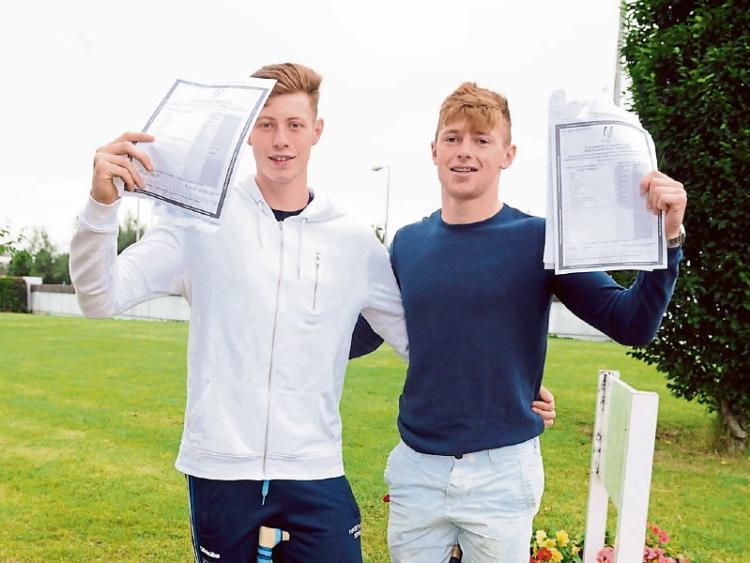 LIMERICK minor hurler Brian Nash is more nervous about togging out in Croke Park to face Tipperary in the All-Ireland final next month than he was collecting his Leaving Certificate results this Wednesday morning.

The 18-year-old from Ballyneety who is a corner-back with South Liberties club, was one of 2,573 students across Limerick county and city who received their Leaving Certificate results at local schools from 9am.

Brian said he is “happy out” and wants to do engineering in UL.

Asked if he’d be celebrating, the Castletroy College student said he’d have to check with his coaches, though he had a break from training this Wednesday.

He said it was hard at first to balance training and studying “but fine once you get into a routine”.

As he approached his first All-Ireland he joked that he’s more nervous about that than the Leaving Cert results.

Hurler Darren Golden O’Mahony, 18, from Castletroy wants to do business in UL, but is anxious to see if there is a points rise.

The Monaleen player said the nerves will kick in with the big match coming up.

“If we win that’s probably a life-time success right there,” he said. “We don’t get many nights out, but we’ll take it easy. The match is the most important thing.”

Padraic Flanagan, the principal of Castletroy College, which saw nearly 200 students receive their results, said the feelings of joy and relief amongst their students were palpable.

They had “very strong results”, with a number of students receiving in excess of 600 points.

“There was no disappointment, no upset. It really was a joyous morning,” said Mr Flanagan.

“The results you get should in no way define you. There are so many pathways nowadays.”

Further south in the county, a total of 147 students received results at John the Baptist Community School in Hospital.

“Happy days,” was the first response from Conor Fitzpatrick, 18, from Knockainey when asked how pleased he was with his results.

And these are happy days indeed for the teenager who secured 530 points.

“I hope to study biological and chemical sciences in Cork.”

“I didn’t really expect to do that well. I got 470 points in the mocks. I was hoping for about that but it was a good jump so I’m happy out- delighted” he added.

Conor did very well in biology, chemistry and agricultural science.

He is heading for Ballybunion to celebrate.

“We are heading to JD’s for a nice quiet night,” he joked.

Fellow student Grainne Kennedy from Herbertstown was “absolutely delighted” with her 585 points.

“I can’t believe it. I got 585, I think. I’m nearly sure,” smiled the 19-year-old who, when asked by the Leader how many As she had accumulated, counted an impressed total of six As - a mixture of A1s and A2s. Grainne received one B which is discounted in the total overall result.

Grainne who is the daughter of Breda and Mike hopes to study Pharmacy in UCC.

“I’ve told my mam and dad and I need to ring my sister  Niamh in a minute.”

To celebrate, Grainne was going for lunch with her family and then heading to Ballybunion with her friends.

“There are a few cars heading down.”

Mary Jones, school principal said: “There is great credit due to the students this year because we were very successful in sport. A lot of the girls especially in Leaving Cert were heavily involved in sport but they did very well. It didn’t take from their results.