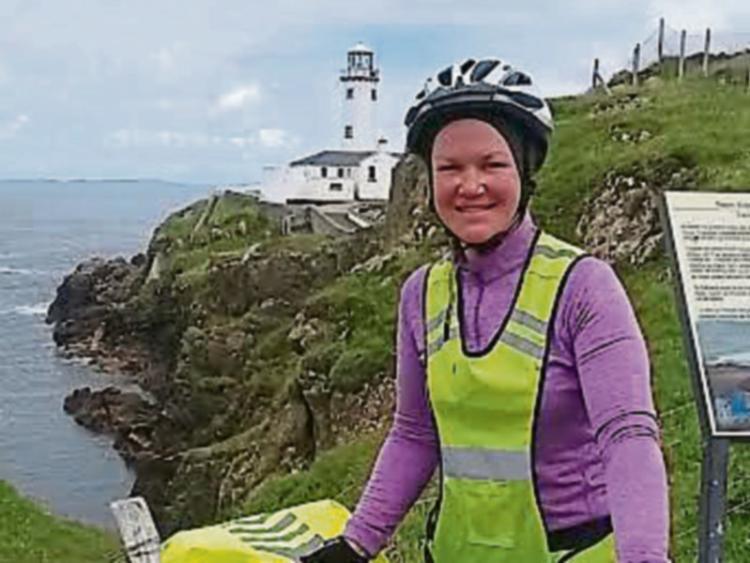 Marie pictured at Fanad Head lighthouse, Fanad Head, Co Donegal when she was nearing the end of her 25-day cycling odyssey

“I WOULD do it again,” Marie O’Connor declared, smiling and glowing after her unforgettable 2,500km cycle along the Wild Atlantic Way.

But next time, she said, she would do it the other way round, travelling from North to South. Otherwise, she laughed: “I would know what hills were ahead of me.”

Her 25-day cycling odyssey however has left her brimming with joy and moved beyond measure at the warmth of all those she met along the way from Kinsale to Derry.

“The people I met were amazing. I was blown away by that. It was heartwarming to encounter such genuine kindness and enthusiasm and an interest in taking time to chat and being welcomed into people's homes and businesses. It is hard to describe how restoring & gratifying it is to be cared for during and after long days in the saddle,” she told the Limerick Leader.

And there has been the added bonus that her adventure has helped raise well over €12,000 for Multiple Sclerosis Ireland and its services in the mid-west. “I’m hoping to reach €13,000 by the end of next week,” Marie said.

That money was raised through various events and donations, with a lot of support and backing from the teachers and pupils at Hazelwood College, Dromcollogher where she teaches biology. “I did lots of different thing. I probably did enough for three years in one year,” she recalled with a laugh.

“It is long,” she said of the journey. “But not too long. I wasn’t saying on my last day, Thank God, it’s nearly over. Marie’s inspiration for taking on such a huge journey was her dad John, from Duxtown, Rathkeale who has been diagnosed with MS. He is a regular user of MSI services in the mid-west which include physiotherapy, swimming etc and Marie was convinced it was something to be supported. She also wanted to raise awareness of the condition and of the work done by MSI. “I have encountered such generosity I am humbled by the support afforded me.”

But it was definitely worth it.

“It is long,” she said of the journey. “But not too long. I wasn’t saying on my last day, Thank God, it’s nearly over.”

Along the way, she had company from fellow cyclists on eight of her 25 cycling days. That, she said, was amazing and certainly helped to shorten the road. And she also had lots of social media interaction through Facebook and Twitter. “That provided me with support and motivation to keep the road ahead of me, especially on days when the hills were long and steep,” she explained.

A huge bonus along the way though was the scenery itself, and the sense of discovery of Ireland’s dramatic and glorious west coast. “It was spell-binding, breath-taking and awe-inspiring,” she said.

“I cannot recommend enough the concept that is the Wild Atlantic Way! It is a showcase of our beautiful landscape, people, arts and crafts, culture and hospitality,” Marie enthused. And she urged people to make the journey but not to be afraid to go off-route too to small places that are not posted mentioning Rossbeg in Donegal in particular.

Marie slept for two days after her adventure. And she admitted it was strange to be travelling in a car after a month in the saddle.

Oddly enough, she laughed: “I have only cycled once in the week I have been back which is surreal.”

If people would still like to donate the online link is www.justgiving.com/fundraising/Maries-Spin-4-Multiple-Sclerosis or email mariesspin4ms@gmail.com to arrange an alternative.