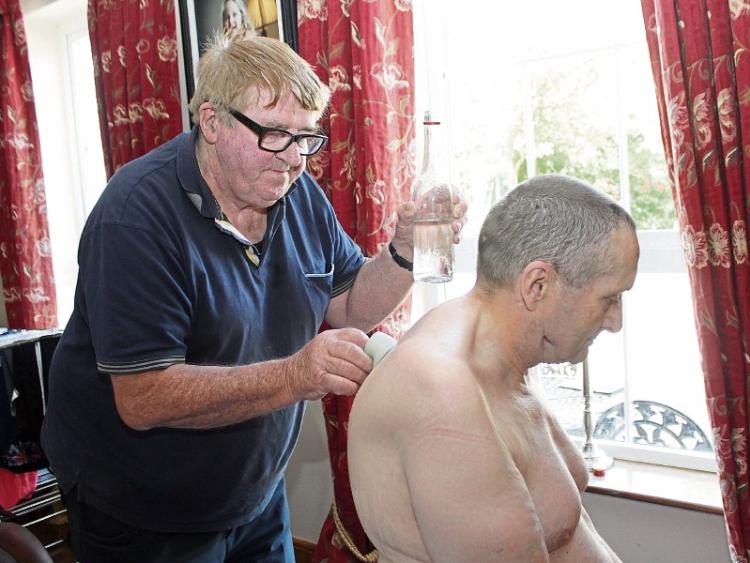 THE JURY has been out on whether Limerick solicitor John Devane would ever see the inside of a court again but he pledges to be back for the beginning of the new term in September.

The well-known legal eagle has been hospitalised for over a year but reports of his demise have been greatly exaggerated, he says. Mr Devane made a brief appearance in Limerick District Court to represent a client in a long running case last month.

He told Judge Marie Keane he “sustained a broken neck” during an operation.

“It is the first time I have worn a suit in over 18 months and I am grateful to be here. I am in a lot of physical discomfort, my body is not in great condition but my mouth is as big as ever,” said Mr Devane, who had his application for the case to be adjourned refused.

Mr Devane said he had to come off record on that day due to doctor’s advice but afterwards vowed to be back for the new court term in September.

In September 2013, he said he sought medical treatment for what looked like a bad episode of gout.

“I haven’t had gout in years because I haven’t drank in nearly 14 years. Then I was treated for psoriatic arthritis but I kept asking for X-rays as my foot was getting more swollen as time went along.

“My next door neighbour is a consultant in University Hospital Limerick (UHL) so I asked him to have a look at my leg. He said it wasn’t psoriatic arthritis or gout, that it was something far more serious and asked me to go to A&E in the Regional, as I still call it, on the night of May 12, 2015.

“They took a few X-rays and said I had multiple fractures in the base of my foot because I have osteopenia, a first cousin of osteoporosis.

“They must have thought I was crazy to be walking around on a broken foot for seven months. I told them I didn’t know my foot was broken but I was in agony,” said the 53-year-old practitioner. 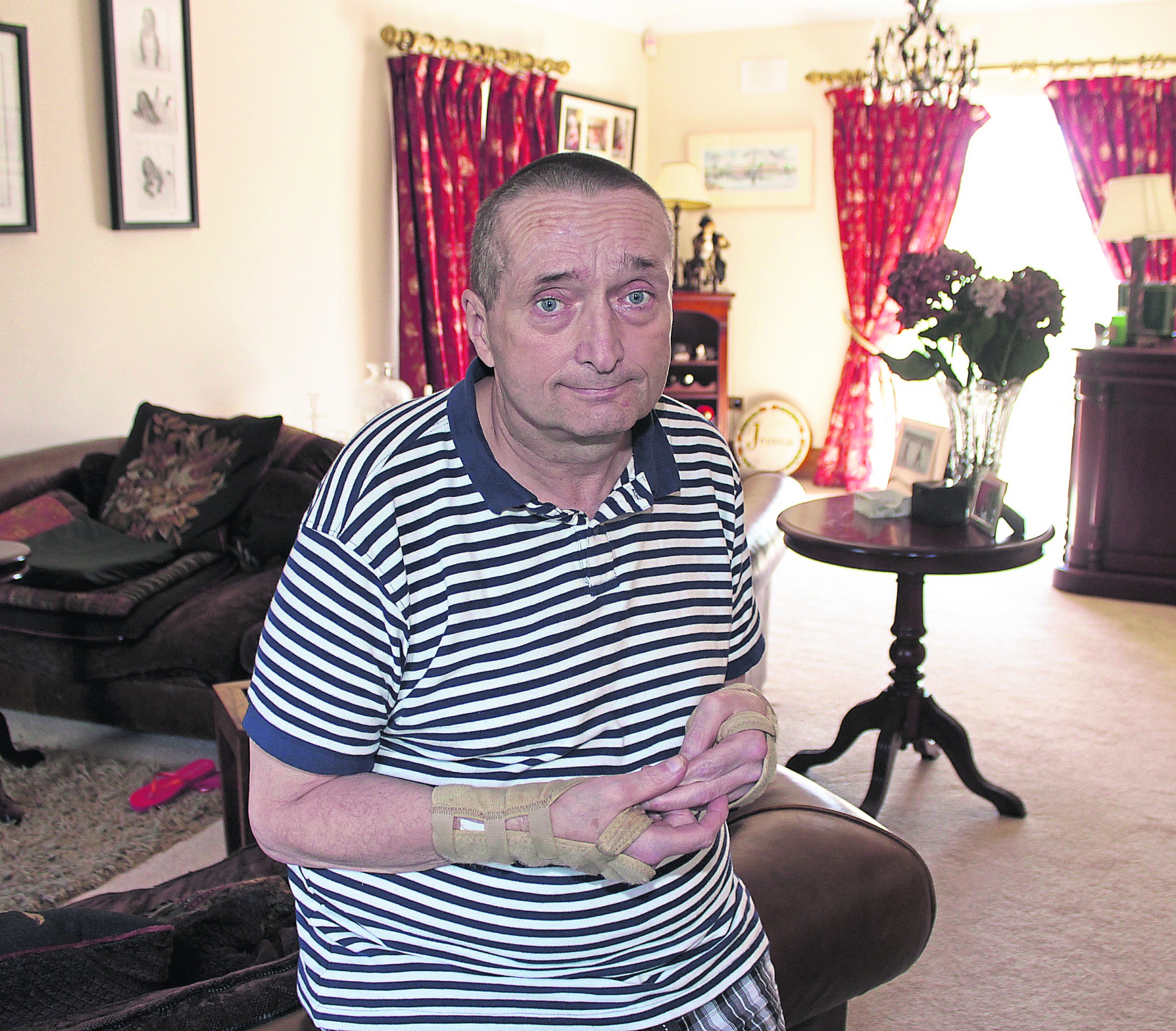 It was found that he had osteomyelitis, a poisoning of the bone.

“It had gone half way up my leg, so much so that they treated me for the next three months with strong antibiotics and other medication because the next step was to amputate my leg.

“I was in isolation because I picked up a hospital bug called KPC. I can’t pass it on but when I am in hospital I have to be in an isolation unit.”

“I was trying to go downstairs and I tripped and fell going down a number of steps. But I got up and was fine.”

As time passed his foot wasn’t improving and the nurse who came to his home to dress it wasn’t happy.

“I rang my consultant and he wanted to see me in Croom. When the consultant looked at it he said we have to take you in now or we are definitely going to lose your leg. I was given the impression that it smelled like gangrene.

“On September 3 they did the operation in Croom and whatever way they put down a tube for ventilation purposes they broke my neck. There must have been a weakness from the time I fell down the stairs. It might have showed up if they took more X-rays of my spine.

“Whatever way it was rubbing off my spine it caught  part of it. They broke two different parts of my neck - C5 and C6. When I woke up from my operation I said what is wrong with me, I couldn’t move - I was paralysed from the waist up. I had to wear a huge steel brace and collar to make sure I didn’t do any further damage to my neck.”

He described this time as a “living hell on earth” but began to see light at the end of the tunnel in January 2016.

“My hands started to move after a friend of mine Philip Scanlon brought one of the Moyross monks, Fr Lawrence to see me. He said he wanted to hear my confession. I said, ‘How long have you got, Father?’ I started laughing and he realised I was only joking.

“He heard my confession, anointed me with oil, gave me the blessing of the sick and gave his own blessing. Within two days I had feeling back in my arms. I went to the National Rehabilitation Hospital for 10 weeks until mid-March and then I was back in Croom for another three months,” said John. At the end of June he was discharged after over a year in hospitals.

“It was very strange being home. I could smell the air, it wasn’t hospital air. While I was in hospital I felt like a prisoner in jail but the difference is prisoners know when they are going to get out, I didn’t. It was a living hell. I found out who my friends were while I was in hospital, I didn’t have a whole lot of visitors. I was in isolation because of the KPC,”” said Mr Devane, who wished to thank fellow solicitor Sarah Ryan, barristers and court sergeants for adjourning a number of his cases.

Now he his home he is continuing his slow recovery thanks to Noel Twohig rubbing poitin into him three days a week.

“My neck is not healed fully and it will never be healed fully. I have splints on my hands. I’m in agony every day, I am on very strong painkillers. I still have a wound at the back of my leg,” said John. But after seven weeks of the medicinal rub he says he can raise his arms which he couldnt’t do in hospital and the dexterity in his hands is coming back.

“Poitín is only illegal if you drink it. He rubs it into my arms, back and legs. It is like physiotherapy. He puts on one coat, it is like applying a coat of paint, and then massages it in. The only reason I am able to climb the stairs is due to all the work done by Noel with the poitín. It has given me some strength in my limbs.” He said he had to sell his car at the start of 2016 to pay household bills and he has been turned down for a medical card.

“Between direct and indirect taxes I have paid approximately €1.5m since I went out on my own 16 years ago and now I can’t get a medical card. I cannot afford to adapt a room so I can have a bedroom downstairs so that I won’t have to climb the stairs.

“The more you kick me when I’m down, I will strive to get up,” said Mr Devane, who confirmed he is bringing legal action the HSE “over my current condition”.

In response to a media query, a UL Hospitals Group spokesperson said it “regrets that any patient is dissatisfied with the care received from our hospitals, however in order to protect patient confidentiality we are unable to comment on individual cases”.